I originally wrote this piece about a Mongolian odyssey in 2015. It was a guest post for a series on memorable journeys on The Expat Partner’s Survival Guide and I have decided to repost it here as that website is no longer active.

I’ve taken some crazy trips over the years and love reliving them in my memories but there is one that always stands out despite it being over 25 years ago. I don’t think I could ever forget this Mongolian odyssey. It was a trip within a trip. During an overland journey from Hanoi to Helsinki, in 1994, I flew from Ulaan-Baatar (UB) to Khovd in western Mongolia on a domestic flight with MИAT (MIAT – Mongolian Airways) known locally at the time as “Maybe It’ll Arrive Tomorrow”. Looking back I’m amazed I arrived at all!  The journey involved elbow scrums, an unscheduled landing, a wrecked plane fuselage, cross-country driving (in a plane), half a seat belt, no toilets and more….

Mongolia in 1994 was only just beginning to wake up to tourism, it was a bit of a wild frontier of a place back then,. There were very few foreign travellers and not many expats but my friend and fellow adventurer Sally and I quite literally bumped into one of the few other Westerners on our first day in UB while looking for a place to stay. As luck would have it, Matt turned out to be working for the only foreign tour operator in town and was in the process of organising a recce for the summer season. He invited us along for the ride. We had no fixed plans and a visa for a month so we jumped at the chance to go with him to the Altai mountains to check out locations for tours. We had to pay our way but that was all, no “tour” fees. We would be riding horses and camels and sleeping in gers (the Mongolian word for yurt). It was a perfect start to our Mongolian adventure, and such a serendipitous opportunity. But first we had to get to Khovd. 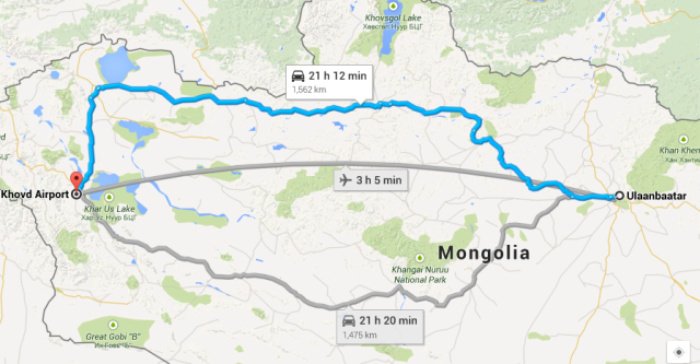 A few days later we got ourselves to the airport, passing a big billboard on the way announcing “Welcome to Mongolia”. It was definitely facing the direction of the leaving Mongolia traffic! We were travelling with Matt, Mandelhai (an interpreter) and 40 boxes of food and equipment, 4 kit bags and 2 suitcases.

There were 2 flights leaving that morning for Khovd, one passenger flight and one cargo with a few passengers. It was pot luck which one you got on. The check-in process was a scrum. No queue, no formal procedure but somehow we scored seats. A friend of Matt’s ended up on the cargo (I was secretly jealous!)

However, by the time we had checked in both flights to Khovd had gone off the departure board. Apparently this wasn’t anything to be concerned about. As well as our small party there were 5 other foreigners, 3 Germans and 2 Americans, on our flight. I remember being impressed by one of the Americans reading philosophical tome The Malaise of Modernity by Charles Taylor amongst the chaos at 8 in the morning! I was also impressed (alarmed?) by what seemed like thousands of other passengers waiting for our flight – many more than there were seats for on the plane. 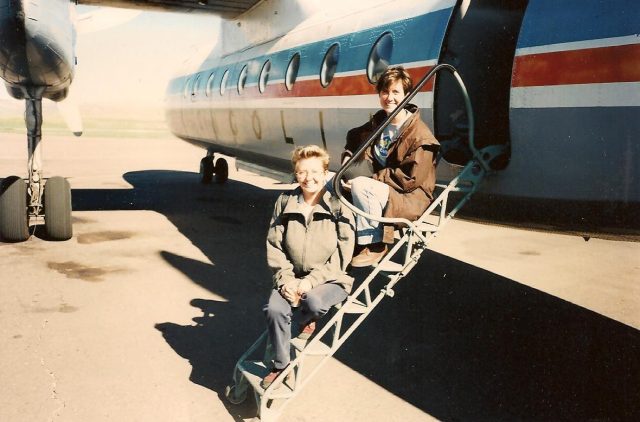 Everything was a shove. There was no point standing back politely. It really was a scrum. Elbows were put to use as we only had 3 boarding passes for the 4 of us! Again, apparently this wasn’t a problem. As long as we shoved and pushed nobody seemed to notice whether we actually had a boarding pass or not.

Matt had to pay tax somewhere and disappeared and by the time he came back the bus to the plane had left. There was no airport ground staff around but other passengers were shouting “Khovd” and pointing to the plane furthest away on the tarmac so we all rushed in that direction after the bus. About ¾ of the way to the plane an official appeared from nowhere and put us all on an empty bus heading back to the terminal….which after a while turned around and took us to the plane after all.

Everybody was carrying a ton of luggage which had to be dumped at the back of the plane (on the tarmac). Most packages and boxes didn’t get checked in. We had to wait at the bottom of the steps for 15 minutes while ground staff went in and out of the aircraft and others examined the wheels. Finally, our ticket numbers were called out and we scrambled for our seats. There were several people too many who sat with the luggage at the back and up with the pilot in the cockpit. There were also several people turned away who didn’t seem to mind too much. 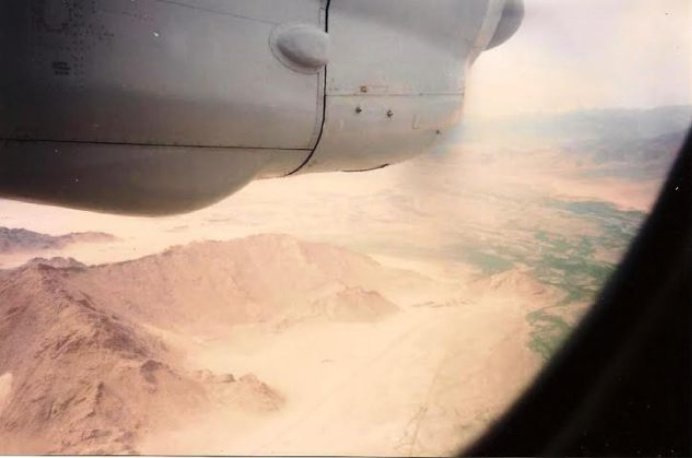 The inside of the plane – a 1950s propeller plane – was quite unique. It had absolutely no markings – no signs on the emergency exits let alone instructions, no seat numbers, no No Smoking signs, no logos, no seat-back tables and very few seat belts. I had half of a belt. On the return flight the luggage was stored in a section between the cockpit and passengers. The door to this section swung open when the plane pointed downwards, which was a handy indicator that we were landing.

Once we were on our way an announcement was made saying we’d be going via somewhere in the South Gobi. However, when we landed it was in a town disconcertingly called “Moron” in the far north, with a wrecked plane by the runway.

Taxi-ing from the runway to the terminal building the pilot took the most direct route – across the grass where there were sheep grazing. No one seemed to bat an eyelid about any of this, not that it was not the town announced, nor the crashed plane beside us, nor the unusual cross-country route. (Photo of Moron airport below). 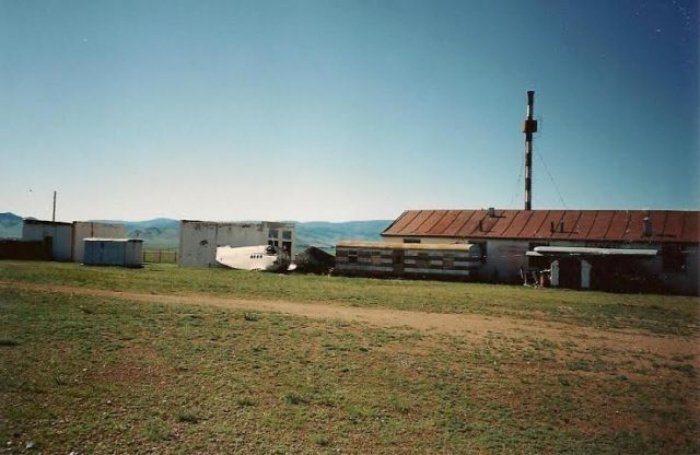 We were allowed off to buy the only things available, Snickers and Fanta (needless to say there was no catering on the flight) and took the opportunity to pose for photos on the steps without the scrum. It turned out this was a necessary refuelling stop. Also slightly disconcerting as it was only just over a 3 hour flight altogether!

I don’t remember much about Khovd airport other than that it was as chaotic as UB and had no toilets (or food or drink but that’s a minor detail). But I do remember that we had to weigh our luggage on arrival before being allowed out of the airport (having not weighed it at check-in). (Photo of a residential part of Khovd below). 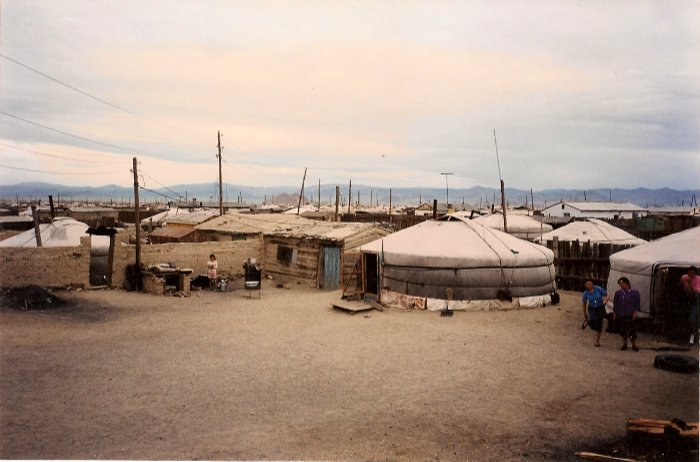 I don’t think I’ll ever forget this journey, my Mongolian odyssey. It was alarming, challenging, exhilarating and possibly the most adventurous flight I’ve ever taken. If, however, my memory one day fails me, Sally and I wrote a joint public diary of our travels which I’ve still got. (A sort of precursor to blogging? Sally now blogs about her nomadic life which I recommend you read. She’s had, and is still living, an incredible life of travel.)

I had a wonderful reread of parts of our journal to refresh myself of the finer details of this journey and honestly I haven’t made up any of this. I haven’t even exaggerated, in fact if anything, I’ve played it down compared to the descriptions in the diary. Travel on MIAT really was crazy! I’m glad I don’t travel like this any more but I’m so glad I did. 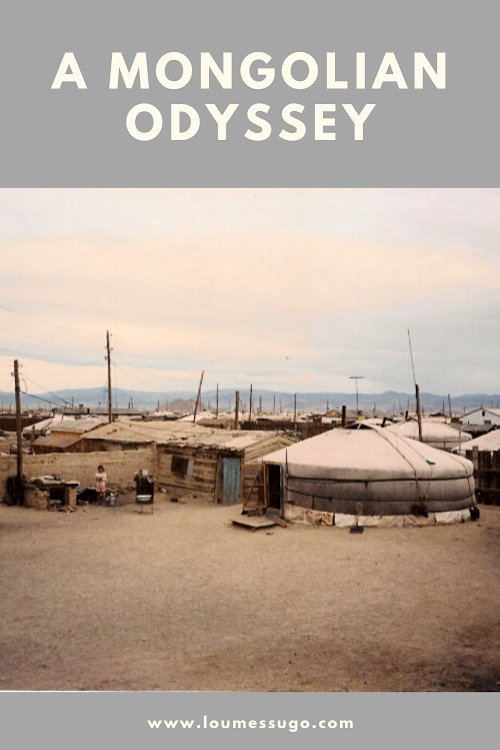