This week we’re off on possibly the most highly anticipated trip of the last 15 years, the biggest adventure ever for our very well-travelled but very European-based children, the most emotional and longed for journey in many many years – excitement is at fever pitch.  We’re heading back to Vietnam, the country where JF and I met 22 years ago and left two years later, almost exactly 20 years ago. Indulge me in some Vietnam memories.

For the last few weeks I’ve been finding it hard to concentrate on anything else, and despite everything being pretty much organised all I’ve wanted to do is keep on reading guidebooks, blogs and articles on Vietnam.  The more I read the more I realise just how much the country has changed over the last 20 years and although this is something I’ve been aware of as we still have friends living there and friends who go back regularly for business and others who have been back to visit, I don’t think until we’re actually there I can fully grasp just how different it’s going to be.  And this is always a risk with “going back”, going back to a place which holds such phenomenal memories of the most amazing time of my life.  There’s always the fear the memories won’t be lived up to or ruined in some way.

However, I think being fully conscious that this could happen will help ensure it doesn’t.   We’ll be in Vietnam with our children, showing them our old haunts and discovering new places together.  We’ll be seeing it through their eyes and making new memories and as long as we don’t get caught up continually comparing the present to the past I know we’re going to have a wonderful time.

I will never forget the first time I backpacked around South-East Asia as a student in the late 80s. I met several aging hippies in Thailand who went on and on about how the country was so much better in the 60s, that it was ruined and nothing like as “authentic” as it had been 20 years before.  I hated that.  I loved what I was seeing and experiencing in the 1980s and couldn’t have been there in the 60s – for most of the decade I wasn’t even born  – and disliked intensely being made to feel inferior that I hadn’t seen the “real” Thailand.  This early independent travel memory has always stuck with me and I’m determined not to be that travel bore, repeating the mantra “it was better back in the day”!

My kids don’t need to hear that, they didn’t exist back in 1990s when we were living in Hanoi and of course countries change, they develop and it isn’t by any means all for the worse.  While the pollution, traffic and some environmental issues may decidedly be worse, many things about Vietnam are greatly improved since “our day”, it’s one of the fastest growing economies in the world and it would be peculiar and rather sad if things hadn’t changed in a generation. 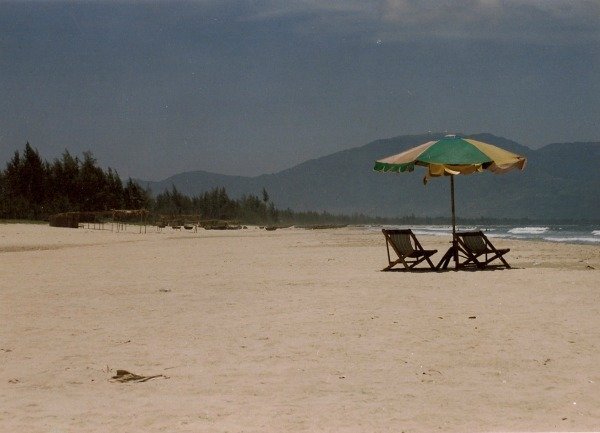 I lived in Hanoi from early 92 to the end of 96, 4.5 years and JF was there from 93-96, 3 years and even during that time we saw great changes.  In order to get it out of my system I’m going to indulge in a little nostalgic reminiscing and tell you something of how it was, back then.  After this I’ll try not to hark back anymore….

Here are some Vietnam Memories 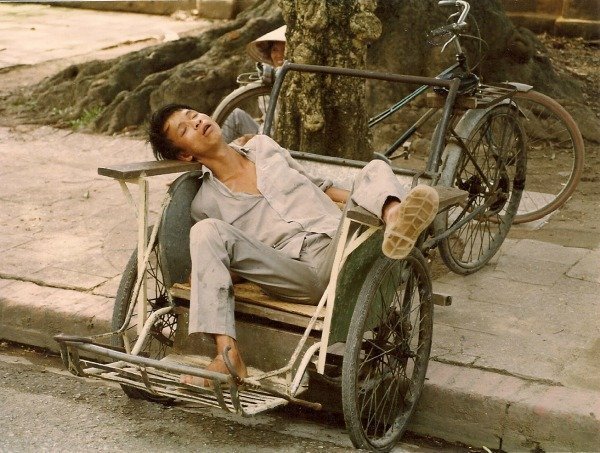 When I first arrived in Hanoi, foreigners had to have a permit to leave the city limits.  You had to apply for one in advance which meant spontaneous trips into the countryside weren’t easy.  One time I went off for the day with a group of friends without the necessary papers and got caught. The motley bunch of lads in the photo below arrested us and accompanied us at gunpoint back to a police station for several hours of questioning.  Despite being a serious situation it was reasonably good-natured and we got let off with a warning so I guess we were lucky.

While on the subject of papers, I was in Vietnam on a single entry visa which was theoretically supposed to last the 2 years of my initial work contract.  This meant if I wanted to leave the country I had to apply for an exit visa. This is such a ridiculous situation I can hardly believe it existed.  I had to apply to leave a county I didn’t belong to!  One time I was denied an exit visa and missed out on a trip to Bangkok with a friend. I do remember being very very upset by that.

Nowadays UK and French nationals and many other nationalities don’t even need a visa to enter the country for less than 15 days. Back in those days another big difference was that ordinary US citizens weren’t allowed into Vietnam at all, the only Americans in Hanoi were UN staff or some Pentagon officials searching for MIAs (soldiers missing in action).  The American embargo lifted during my time in Hanoi which started the process of normalising diplomatic relations between the two countries, but by the time I left there still wasn’t a US Embassy. Recently President Obama visited Hanoi and ate street food in a café opposite one of my old flats (I lived in many different places!)  Can there be a bigger change? 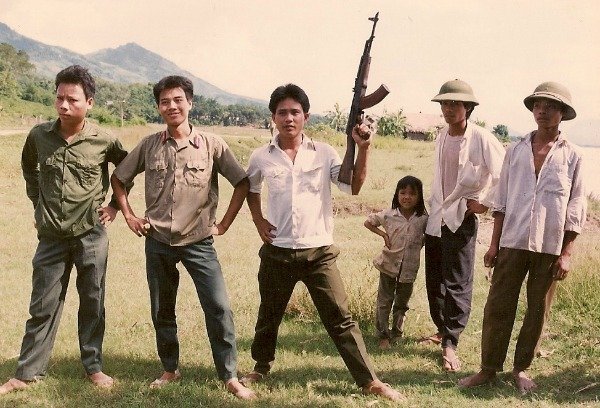 In the early days of my time in Hanoi I pretty much knew every car on the street other than the Russian Volgas that Vietnamese officials (and I) were driven around in (photo below of my trusty Volga on a trip to the seaside.)  There were so few Western cars in the city and they all belonged to UN agencies or Embassies that I knew who drove them.

Cyclos were the main way to get around (for everyone, foreigners and locals alike) if you didn’t want to cycle or use a scooter and they were also the main form of delivery vehicle.  There were more bicycles than you could ever imagine and the majority of motorbikes were Russian.  The greatest status symbol was to own a Honda Cub, the family motorcycle par excellence.

By the time I left the first taxi company had opened in Hanoi with a fleet of about 20 Kias.  Looking at images of Hanoi’s traffic now I know cars are everywhere, motorbikes rule and the few cyclos that are left have been poshed up and are only for tourists. 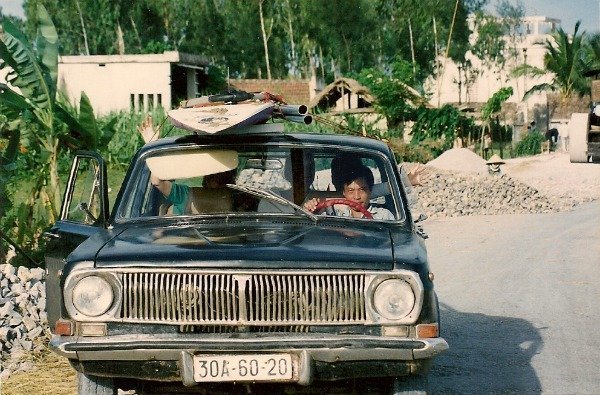 Russia ruled back then.  Not literally of course but the vast majority of pretty much anything imported came from Russia:  cars, trucks, motorbikes, kitchen utensils (I still have some!), tinned food and even шампанское (Russian sparkling wine, which despite being unauthorized was called champagne and oh boy it was foul!)

The photo below shows one of the main streets in Hanoi (Trang Tien) with a bookshop sign in Russian “книга” on the right (and very little traffic including no cars).  In the early 90s Westerners were so rare in Hanoi that kids would shout “Liên Xô” at us meaning Soviet Union as foreign basically meant Soviet. By the time I left we were called “tây” meaning Westerner.  I wonder what we’ll be called now. 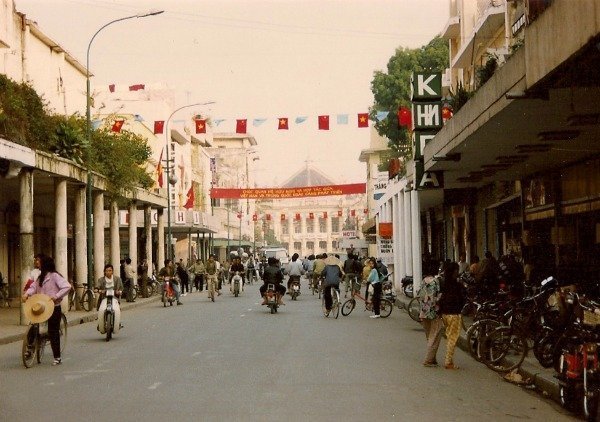 When I arrived in Hanoi I remember being struck by how recent the American War seemed.  (Yes, I say American War for that is what it is called in Vietnam, clearly the “Vietnam War” doesn’t make sense there!)  Landing in Noi Bai airport I could see bomb craters all around and evidence from the conflict permeated into all walks of life.

Street cafés used old military parachutes for shade, farmers used bomb craters as ponds for their ducks, there was a crashed army jet in a lake in Hanoi and it was a daily occurrence to see war-injured men getting by without limbs on makeshift trolleys/crutches. There were so many creative ways in which old weapons and other military equipment had been recycled/reused; in this photo you can see military patrol boats being used as a café in Hoi An.

Many things will have changed, I hope we don’t have an Escape Rope on our flight from Hanoi to Danang like I so usefully had on that route in 1993 (see photo below) but some things stay the same.  One of the best cafés in those days, the only place where you could find tasty croissants, pastries and yogurt, was 252 Hang Bong street, fondly known as Mr Chi’s.

Mr Chi is now almost 100 years old, has handed over the reins to his daughter in law and the café is still going strong; it even has the same photos on the wall of Catherine Deneuve eating there while filming Indochine.  I can’t wait to take my boys to Mr Chi’s in a few days. 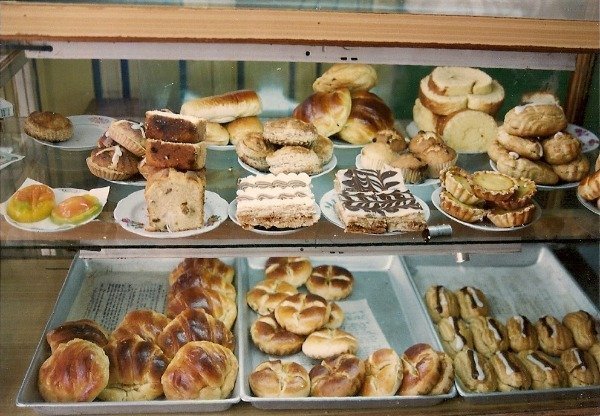 I could go on and on, I’m loving going through old photo albums and reliving some of the best years of my life, but I better stop, I guess…. As you must have worked out the photos here are all pre-digital scanned copies and developed in dodgy street labs where the quality varied hugely from batch to batch, so please excuse them.  I can’t even imagine how many more photos I’m going to take on this trip now that we’re not limited to a 24 or 36 exposure film! 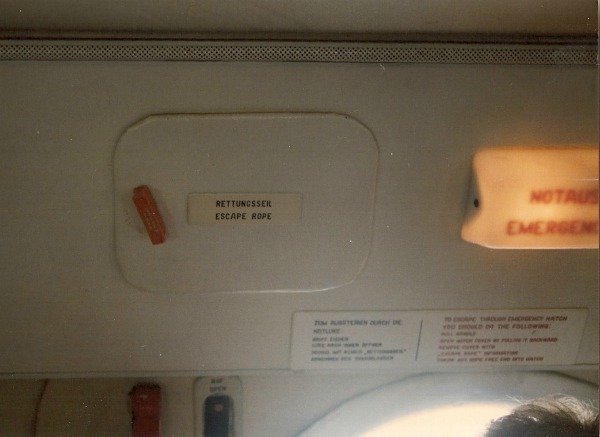 The anticipation for this trip is almost overwhelming, my Vietnam memories are soon to be refreshed; I simply can’t wait to be back in steamy, sultry, noisy, chaotic Hanoi with my kids and my locally-found Frog!  Have you ever been back somewhere after a long time period?  What do you think of returning to old haunts?

Getting Back into the Swing of Things 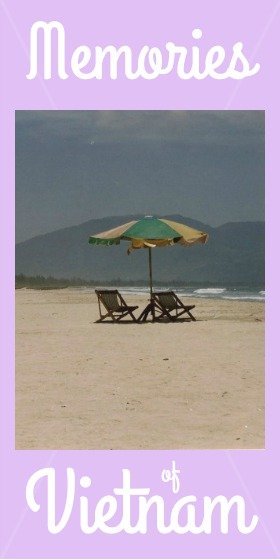