Nice and the Francophonie Games

This weekend sees the beginning of the 7th Francophonie Games (les 7èmes Jeux de la Francophonie) in Nice. What on earth is this? Well, it’s sort of, very roughly, France’s equivalent of the Commonwealth Games (which probably doesn’t mean much either to my American readers) and I thought I had a ticket to the opening ceremony. Luckily I decided to check online what I was going to because it turned out that I had been given a ticket to a mega-sing-a-long with 450 school kids (none of them my own I hasten to add). Now if you remember my post about the end of year dance shows then you’ll know just how long these “spectacles” can be and how you really do have to be a devoted parent to sit through them. So, I’ve bummed out of this evening’s “entertainment” and will just have to watch the real opening ceremony tomorrow on the internet…shame I would have liked to have seen Manu Dibango but at least I’m spared the eternal speeches by Flanby* and his cronies!

So, what is la Francophonie? I first became aware of this concept and the international organisation when living in Vietnam in the 1990s. Just as I was leaving the country, Hanoi was preparing to host a Francophonie Summit which was a big event for the Vietnamese government back then and it was difficult to avoid hearing about it. La Francophonie describes the people and institutions which use French as their maternal language, language of daily use, administrative language, teaching language or language of choice. And hence the Organisation International de la Francophonie is a collective of 56 member countries and 19 observers who have French in common. It exists to promote peace, human rights, democracy, cultural diversity and the protection of the environment. It may come as a surprise that there are so many countries using French (it is the official language in 32 states or governments) though many seem to have a very tenuous link…Bulgaria – Francophone? Over the years that I was a regular visitor and the 6 months I lived in Sofia, I can’t say I heard any French…but what would I know? The majority of the Organisation is made up of France’s ex-colonies (parallel with Britain and the Commonwealth), coming mainly from central, west and north Africa, from the Indian Ocean, parts of the Caribbean and parts of south-east Asia, “Indochina”. There are the obvious countries such as Canada, Belgium, and Switzerland but large numbers of eastern European countries, in particular ex Yugoslavia, are also part of the Francophonie. The Organisation holds a summit every 2 years and the Games, just like the Commonwealth Games, are every 4 years. 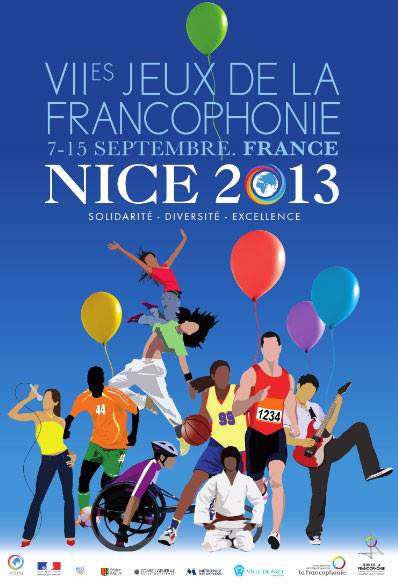 Getting back to the Games, this event will last 10 days and is as much about culture as sport. In fact there are only 8 sports participating whereas there are competitions going on in street performance, singing, storytelling, literature, art, photography, dance and digital and ecological “creation”. (Not too sure about the last 2!) The idea is to promote good relations between countries which have the French language in common, and while doing so promote French itself. All events are free, including the opening and closing ceremonies, though you do have to get a ticket to enter the venue. Some events are sold out (such as the real opening ceremony tomorrow to which I am not going!) I think it’s going to be a lot of fun and bring an international dynamic to an already fabulous city, and I’m definitely going to check out the ecological creation event!

*Flanby is the nickname for François Hollande, Monsieur le Président!