We recently packed up a picnic and headed off for a lovely Sunday walk with some friends, which made me think this would be a good category for my blog: recommended walks.  So here’s the first in what I hope will be many: hill walk to the St Barnabé Plateau.

This walk starts at the village of Courmes which is about 25 minutes from Lou Messugo.  Head out of Roquefort towards La Colle sur Loup and at the bottom of the hill before the town turn left on to the D6 along the Loup river and up through the lovely gorges du Loup.  Look out for a waterfall on the right which I recommend you visit on the way home for well-deserved ice-cream or beer at the café.

At the hamlet of Bramafan turn right onto the D503 to Courmes, a steep, winding and very narrow two-way (though you wouldn’t know it) road.  The village is at the end of this road where you’ll find a large car park.

The beginning of today’s path (partly the GR51 with red and white markings, and partly just a local walk with yellow marks, just to complicate things) starts shortly after the car park, up the road to the left under a large oak tree.  (Click here for my tips on hiking in France including how to read signs).

After a few minutes you’ll come across a small crossroads in the path which isn’t significant, just keep going straight. At the first wooden sign (#83) you get the choice to take the more direct route to St Barnabé which is what we did. It’s a significant shortcut making the whole round-trip about 3 hours.  If you take the long route I don’t know how much longer it is, but it’s definitely a lot!  This shortcut is the less significant-looking path though it is clearly marked in yellow.

From now on it’s all straight forward and uphill along rocky paths with lovely views across to the village of Cipières and Gréolières in the distance, and the Barre du Cheiron, an enormous cliff-like mountain to the north.  All along the open path we were treated to blackberries to feast on and sloes to gather for ambitious plans to make sloe gin! 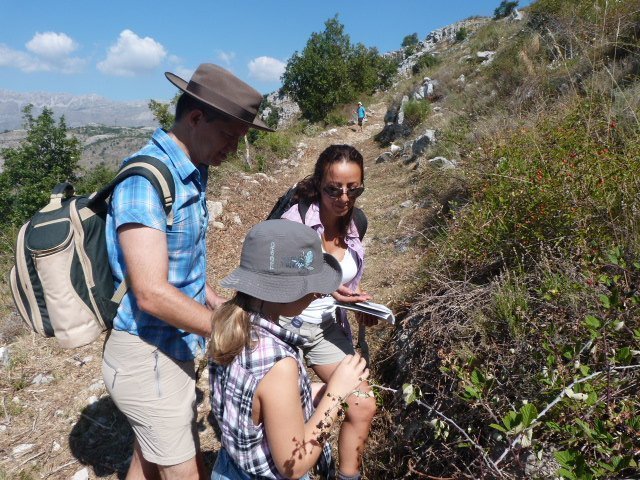 This hill walk is consistently uphill but it’s pretty easy going as it’s just so beautiful and you’re rewarded when you reach the vast expanse of flat land on the St Barnabé plateau. Situated at just under 1000 m, in winter it can be under snow, but no matter what the weather, it’s an unusual landscape with very few trees and weird stone sculptures created by erosion creating a rather spooky atmosphere.  It’s truly beautiful though, don’t get me wrong!   You feel like you’re on top of the world, it’s completely silent with only the sound of the wind and the occasional bird.

Once on the flat of the plateau take the main path north towards a shrine to John the Baptist (signpost #86) in the middle of the open landscape where you turn sharp right.  This section of the walk follows under high tension electricity pylons but it doesn’t ruin the glorious isolation. Look out along here for silhouettes of black cats stencilled on to rocks.  We spotted four.  I don’t know why they’re there but their presence certainly helped to keep little kids’ spirits up. Searching for cats as well as looking for the next yellow marker helped motivate the younger members of the group. 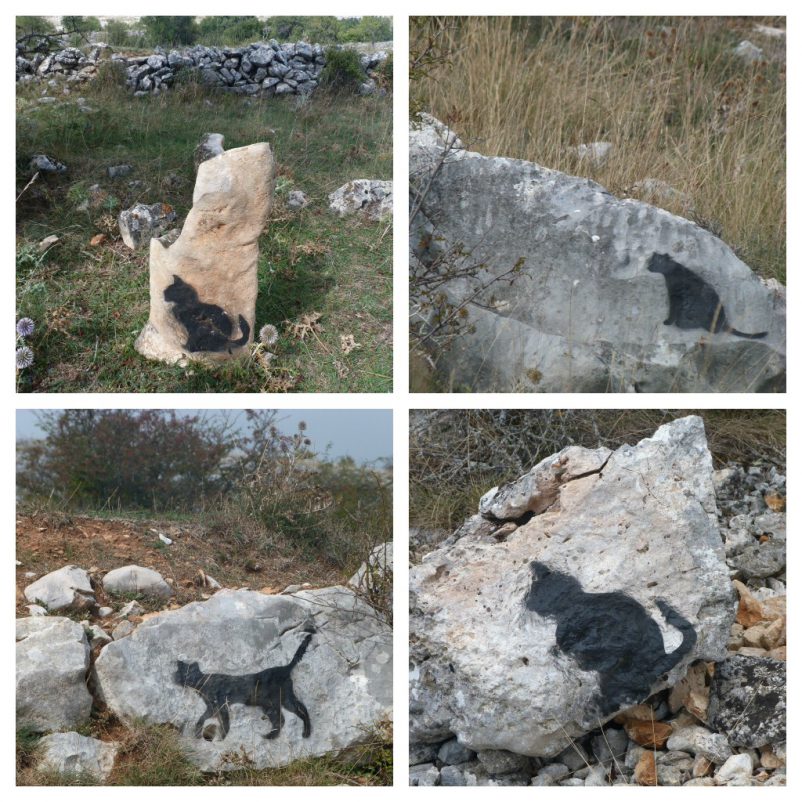 In spring the plateau is covered with rare orchids, lilies, fritillaries and other protected flowers and as with nearly all walks in the area you’ll see and smell plenty of wild thyme.  Treading on it releases the smell of Provence – mmm heavenly!

You’re now nearly at the hamlet of St Barnabé and you’ll start to see signs of habitation such as “la maison de Poupée”, the doll’s house.  Saint-Barnabé is tiny and the chapel bearing its name is minute. It was firmly locked but we could peer into the gloom through the little windows.  It looked very dark and very damp.  This is as far as the trail goes, you now have to turn around and walk back the way you came.

If, like us, you’ve run out of water, there’s a drinking fountain just outside the chapel but if, like us, you find it dry, here’s a tip:  open the manhole cover nearby and turn on the tap!  That’s what we did.  When nothing came out of the tap we set to a little detective work as our friend pointed out that the ground around was wet.  JF, ever the engineer, decided to open the nearby manhole cover which sure enough had a tap in it.  He turned it on, we filled our bottles from the fountain, turned off the tap and replaced the cover.  Simple!  (Probably not advised in a busy street but St Barnabé is as sleepy as they come).

Do you like hiking?  Do you have a favourite walk?  I’d love to hear from you.