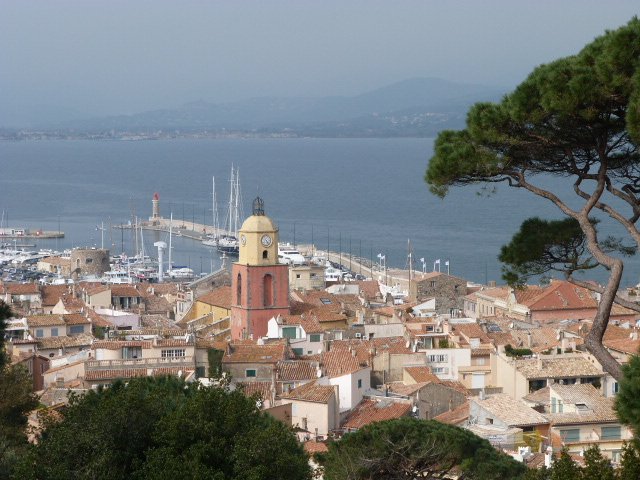 I set off armed with both a full battery and an empty SD card in my camera and a fully charged phone aiming for a photographic tour of St Tropez in perfect spring conditions.  Leaving home at 7.30 in the morning the day looked promising and the drive was sunny.  I hadn’t been to the mythic, hedonistic town of St Tropez for 12 years I worked out, which was a bit of a shocker as I felt like I’d been fairly recently.

There was a time when JF and I went regularly, most summers, but I realised it was before we moved to the south, when son N° 1 was still a toddler and N° 2 wasn’t even born. How time flies!  All the more reason to look forward to a day wandering around with my camera.

But as we got closer the clouds covered over and by the time we arrived it was overcast, flat, grey, dull and cold. What a disappointment after several weeks of perfect blue skies! Bam went the plan for a photographic blog post on the pretty Provençal town.

So having grabbed a coffee on the (empty) Place des Lices I headed up the hill to the Citadel, a 17th century fortress overlooking the town.  On my way up I passed plenty of gardeners busily mowing, strimming and preparing the park for spring, but no visitors.

This was a bit of a precursor to the rest of the day although I didn’t know it yet. I didn’t see a single other soul (apart from the cashier in the ticket office) in the fort though I got to share it with a magnificent peacock who obligingly opened his tail just for me.

From its dominant position the Citadel offers the best views over the town and across the bay to Grimaud and Ste Maxime and for a minute or two the clouds parted.  I was able to take a couple of photos with some light definition, but the sun didn’t last and it was quickly back to grey.

All alone I felt a little spooked in this ancient historical monument and didn’t stay too long though I’m sure my boys would have enjoyed the canons, drawbridge, turrets and arrow holes. 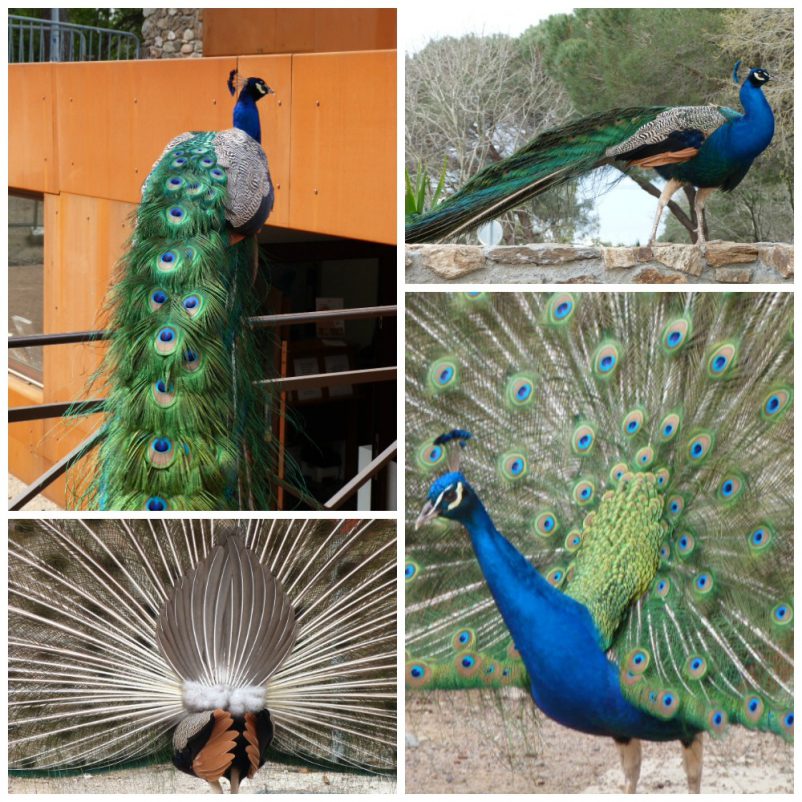 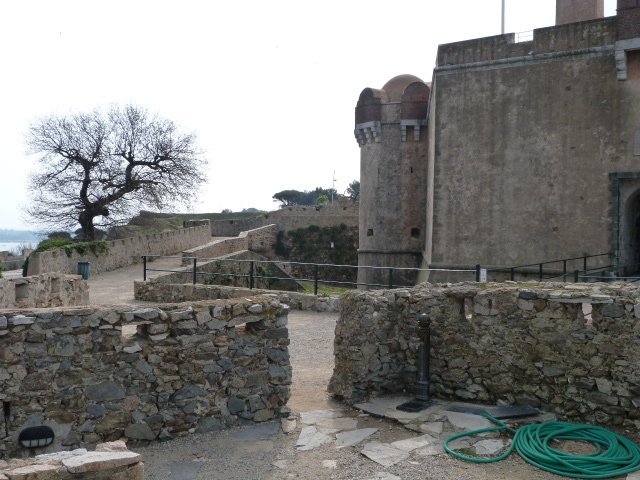 Having left the Citadel I wandered through the old town, randomly turning here and there as I fancied.  I had no plans, no agenda.  Occasionally the sun came out brightening up the dusky pink alleyways but every time I thought I’d take a photo there was a bloody white van in the way, or a wheelbarrow, or some messy scaffolding covered in flapping plastic, or a stepladder, or a pile of building rubbish…you get the idea.  It didn’t look pretty!

And then I noticed the only people around were builders and painter/decorators.  So much for glamorous St Tropez! The more I explored the more I realised absolutely every single shop, café, bar, apartment and house was under renovation. Shutters were closed, windows were papered over, dust was streaming out of vents, the air was perfumed with fresh paint and instead of cicadas or seagulls all I could hear were sanders, saws, drills and hammers.

I began to feel like I’d wandered on to a film set being built; everyone was manically preparing for a grand opening, for the beginning of “the season”, it really felt quite surreal. 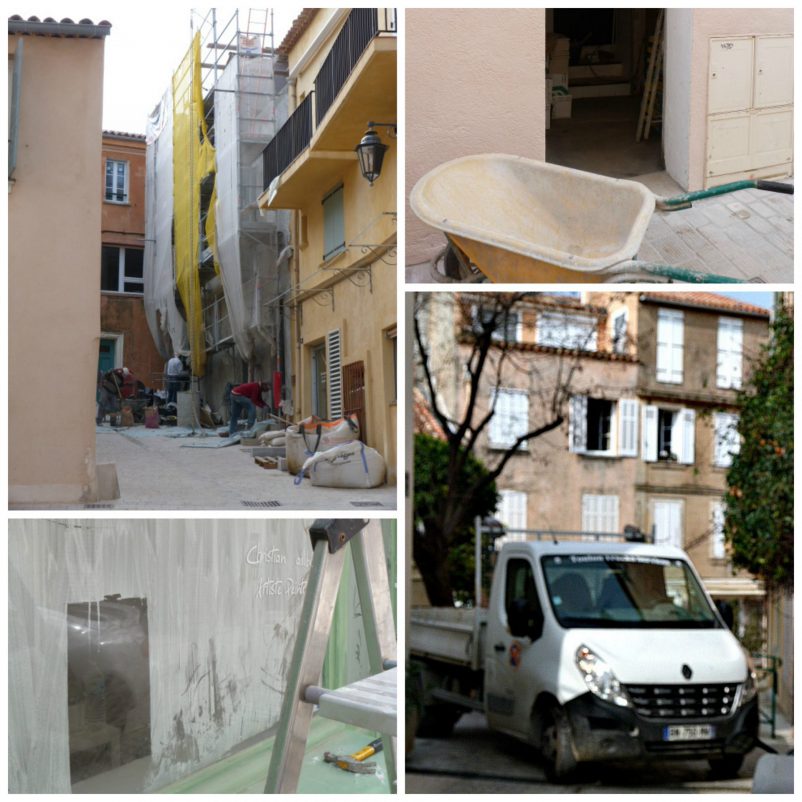 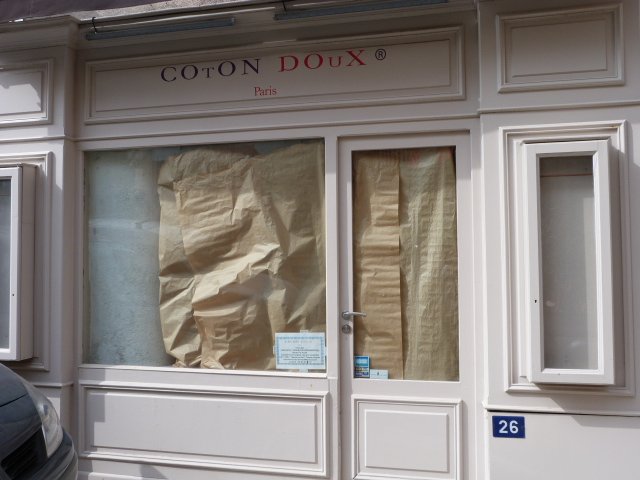 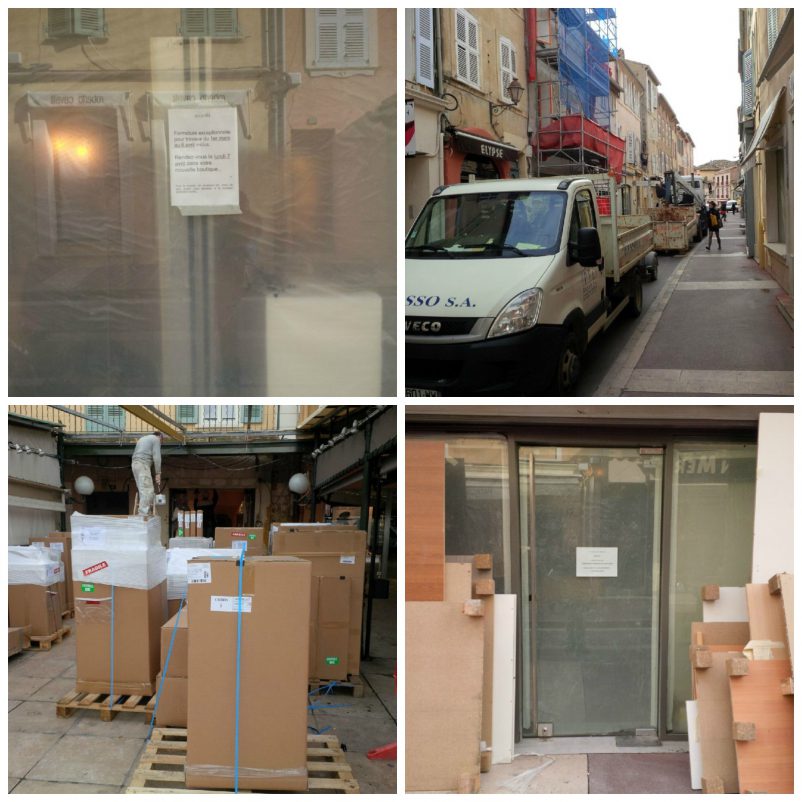 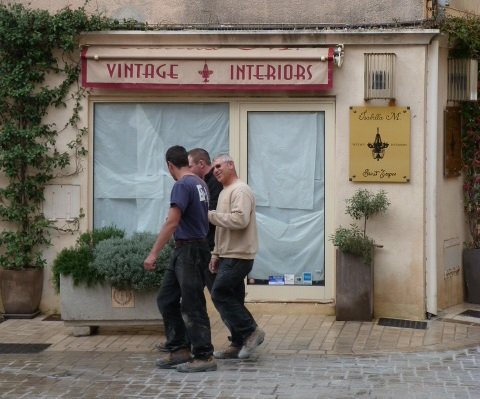 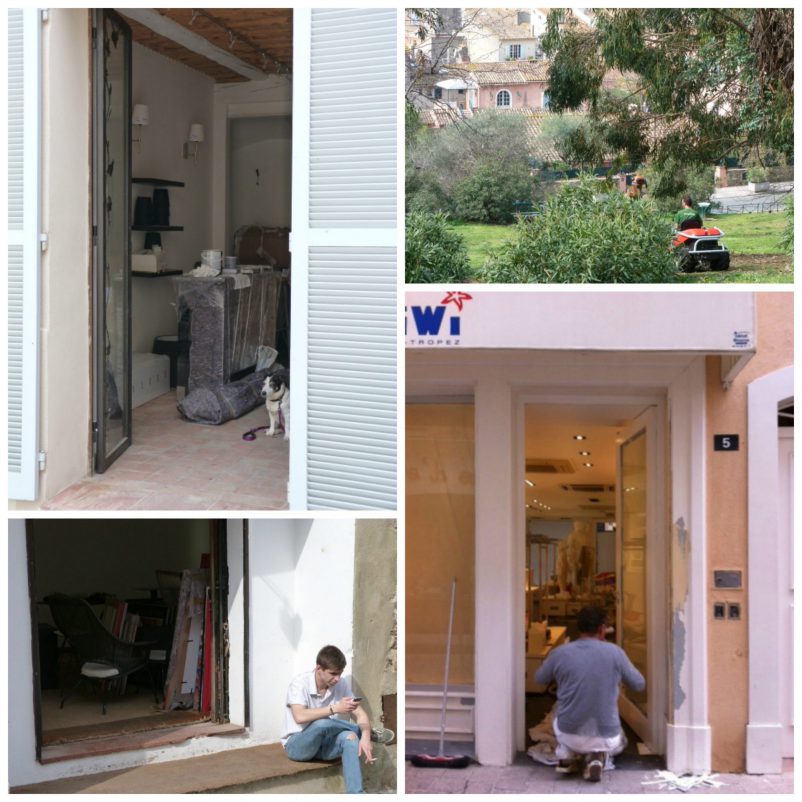 If you look beyond all these works, and give it another couple of weeks, you’ll find St Tropez is a lovely town.  Its facades are rendered in subtle pale pinks, oranges, yellows and ochres.  Almost the only brightly coloured building is the yellow and red church tower that pops out of the middle of the old town.

The port, however, was one place not en travaux and with a distinct lack of mega yachts docked along Quai Suffren, and the few restaurants that were open being utterly devoid of customers, I could almost imagine how the pretty harbour might have looked before St Tropez became the international jetsets resort of choice. When it was just a sleepy fishing village.  Before it became a magnet for artists, musicians and film-makers.  Before Brigitte Bardot and topless sunbathing brought it notoriety. Before it became the famous party town centred around the mythic Hotel Byblos.  A long time ago. 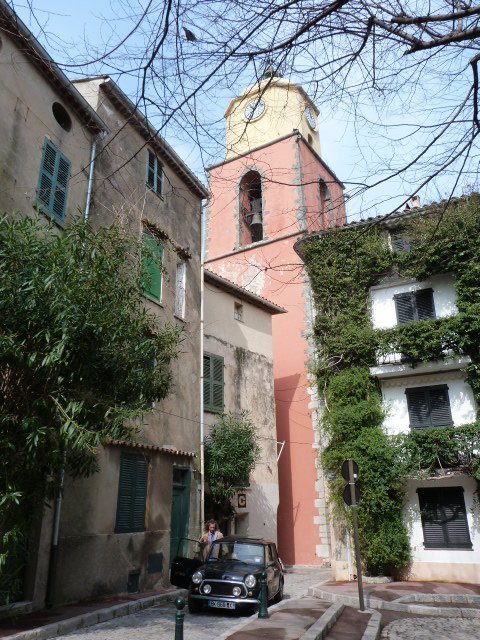 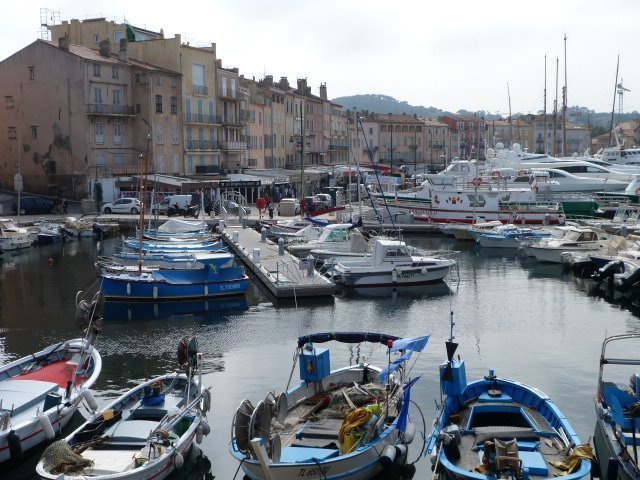 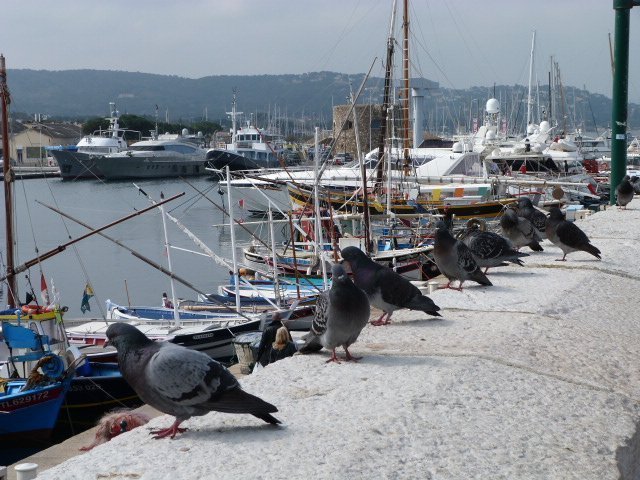 If you want to see St Tropez in action don’t go in March! But don’t go in March expecting quiet either, (although after the builders have stopped for the evening I imagine it’s very quiet).  I didn’t expect the renovation mania that I stumbled upon at all but if you look beyond that, it’s possible to spend a lovely day enjoying St Tropez out of season.

Very few restaurants were open but La Tarte Tropeziénne Boulangerie/Salon du Thé, home of the eponymous Tarte Tropézienne, was open for business as usual. It is located on the central square, Place des Lices, normally buzzing with the clink of boules as one of France’s most renowned pétanque pitches though, you guessed it…it was strangely empty in March! 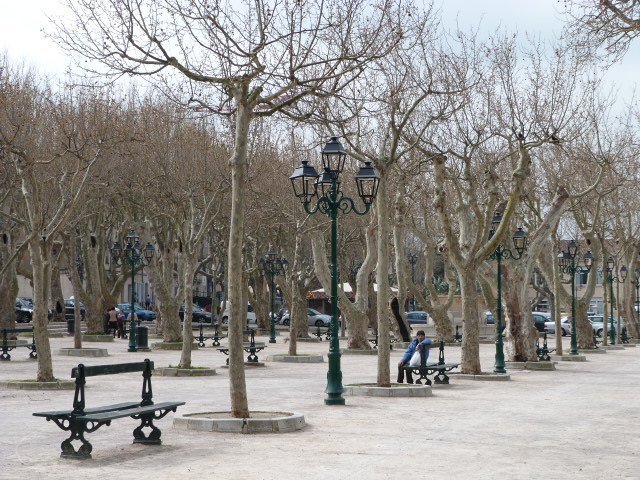 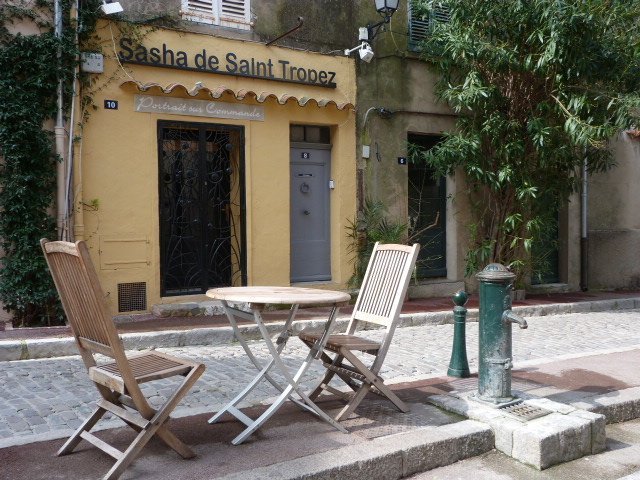 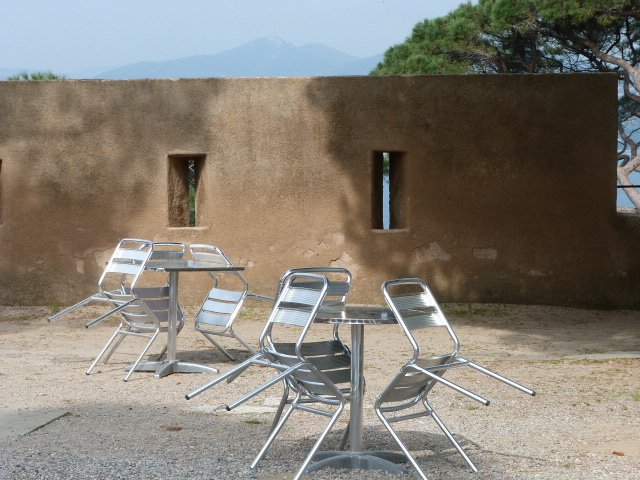 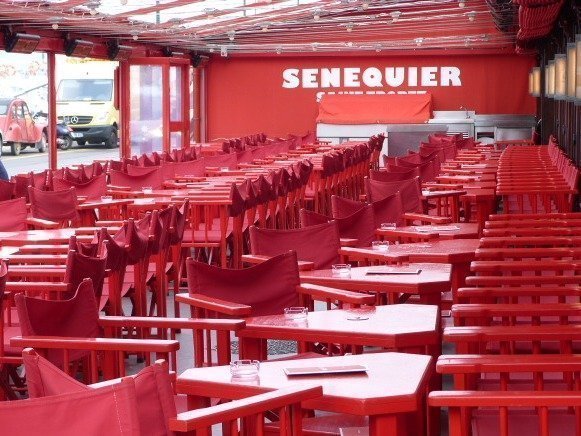 I met JF at La Tarte Tropézienne and after a delicious lunch consisting of a warm goat’s cheese in filo salad followed by a generous café gourmand (which considering its fame and position right on the square was very reasonably priced) we headed back home. 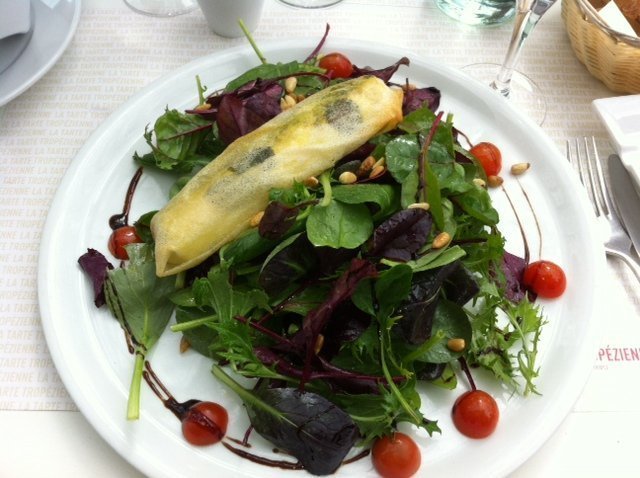 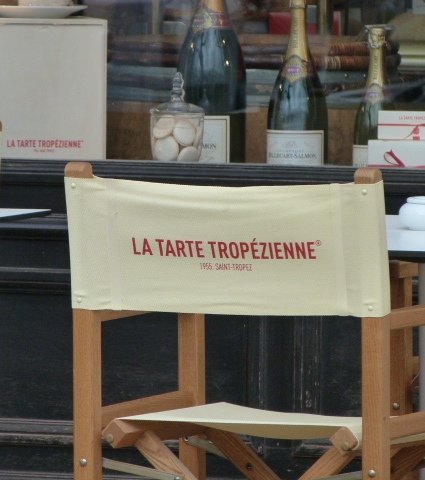 Have you ever been somewhere that was completely closed up?  Somewhere that took you by surprise? I’d love to hear from you. 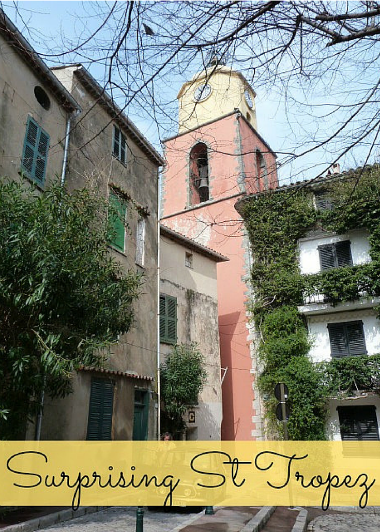 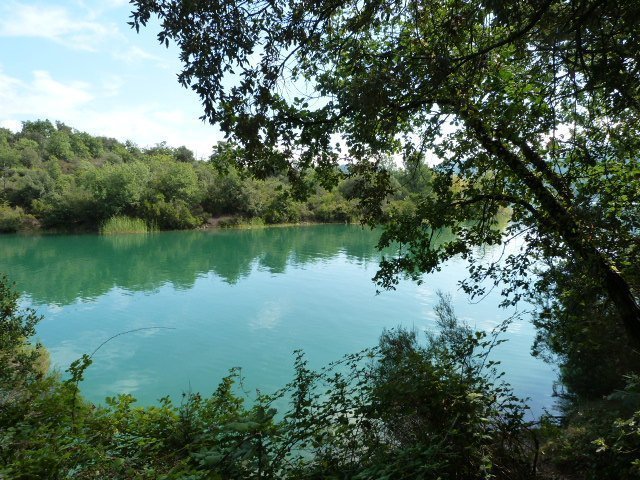 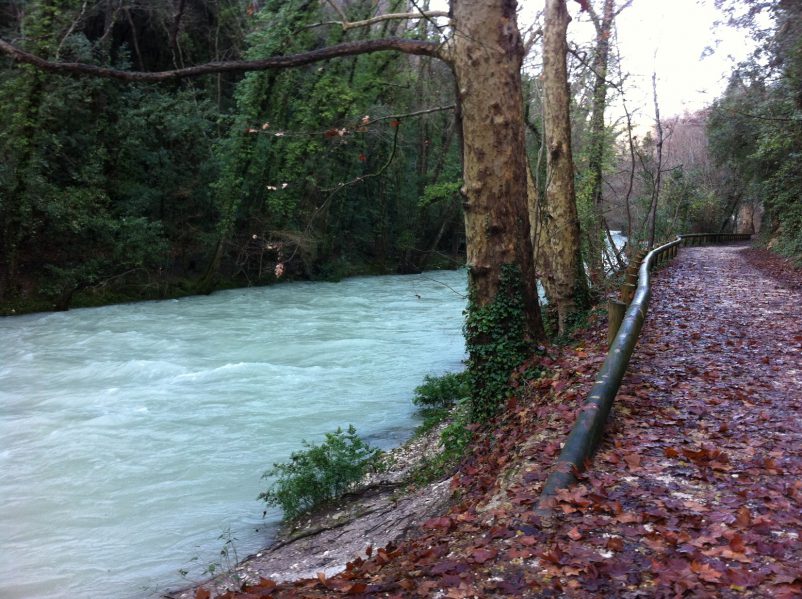