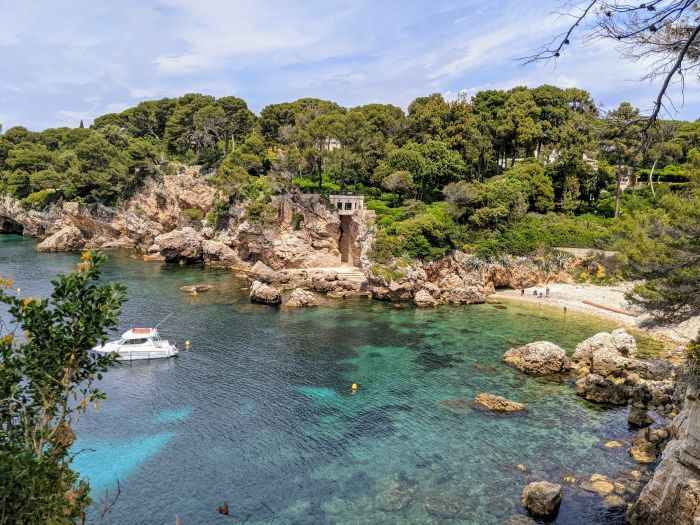 The Cap d’Antibes on the French Riviera, a name synonymous with luxury properties, phenomenal wealth and perfect manicured gardens is not often linked with untamed natural beauty. But a walk around its coastal path reveals a surprisingly wild landscape, often more reminiscent of Brittany than the Côte d’Azur. It’s a delightful walk, perfect really, taking in gorgeous views of the Mercantour National Park one way and the Estérel mountains the other while gently climbing up and down well maintained rocky paths next to the crystal clear sea. It’s hard to stress just how lovely this coast walk on the Cap d’Antibes is. 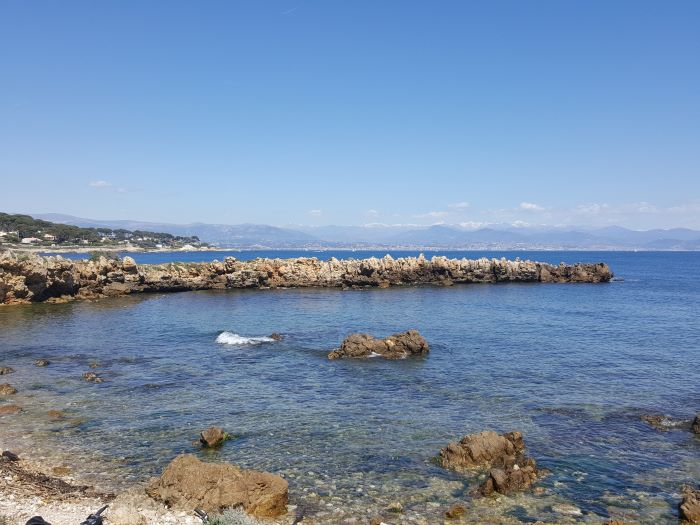 This hike (though that word implies more effort than is required here in my mind) is just between 5 and 5.5 kms (depending on your route, see below) and takes about 1.5-2 hours without extended picnic stops. Start at the car park behind the plage de la Garoupe (on the Cap d’Antibes) and take the path that runs along the right side of the beach along a stone wall. From here on for as far as you can go along the coastal path the route is obvious and doesn’t need to be marked as there’s no choice. 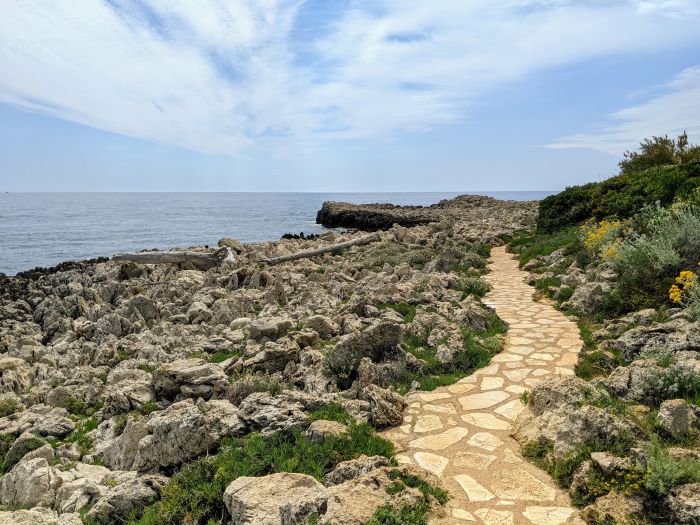 A note of warning however, do not take the path in bad weather/high seas/strong winds as it can be dangerous.  This is a fair-weather walk and none more fair than the day we did this coast walk on the Cap d’Antibes for the first time. It was during the Toussaint holidays in early November a few years ago, since then we’ve done it plenty of other times in all seasons. 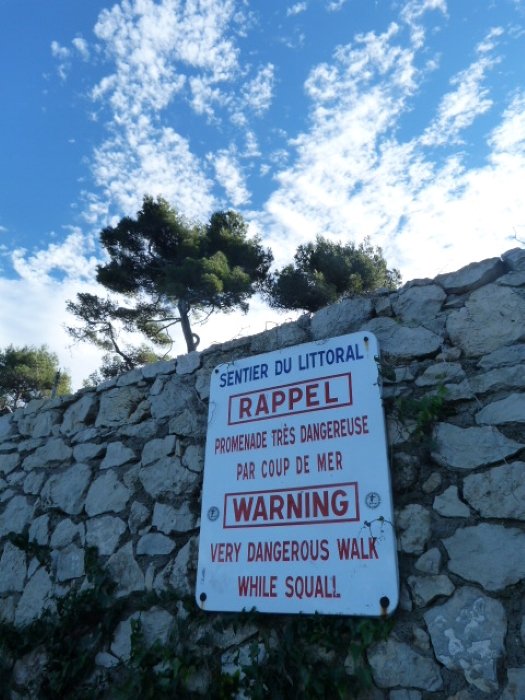 Hiking the coast walk on the Cap d’Antibes for the first time we stopped for a picnic early on, almost immediately in fact, owing to the time of day.  This turned out quite fortuitous as further on along the path there are fewer places to make a camp and at times there is no room at all to leave the narrow track.  We ate our lunch on a wide open point with a magnificent view over the eastern side of the Côte d’Azur and across to the Alps behind. 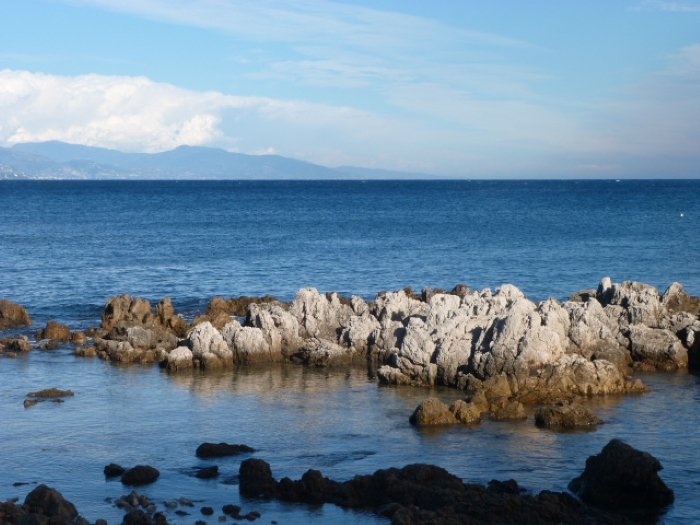 Despite it being November we were all dressed lightly in t-shirts and the children even swam at the end of the walk!  Our group consisted of three generations from seven years old to over eighty and everyone coped well with the length and level of difficulty of this walk.  I must admit though that the eighty-three year old with us was fit and determined and I doubt many of her age would be able to manage it. 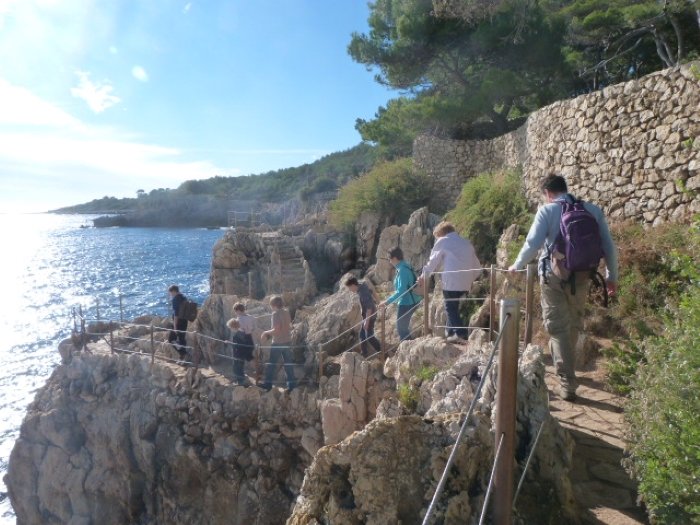 The trail follows the old customs path right along the water’s edge, winding up and down along steep white limestone cliffs and past narrow rocky coves.  It’s well maintained, even cobbled at times, with hand rails to hold onto in the more precarious parts.  Looking down to the left the water is beautifully clear, deep blue and sparkling, and looking up to the right you catch glimpses of private gardens behind high stone walls. 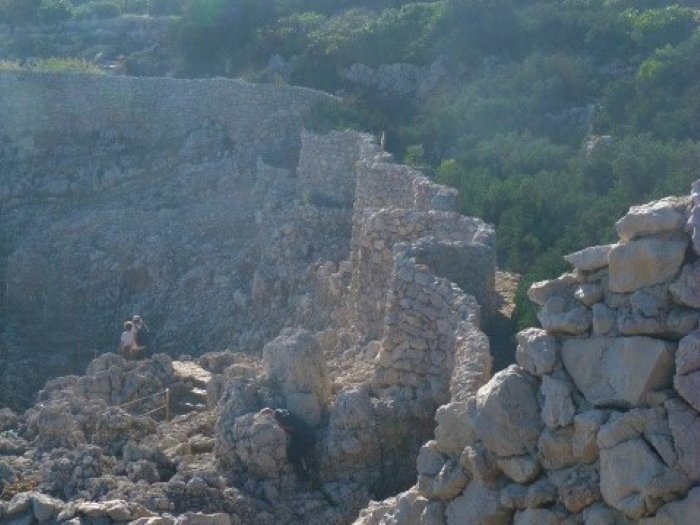 Every now and then there’s a gate into one of the luxurious gardens through which you can see ancient olive trees, Aleppo pines, enormous agaves and exotic cacti.  Did you know that the agave flowers only once and then dies?  (Well now you do!)  The jagged white rocks are covered in succulents, such as the “Witches Finger” which seem to grow out of nothing.  You wonder how they could possibly survive but apparently they thrive on the salty spray and warm sun. 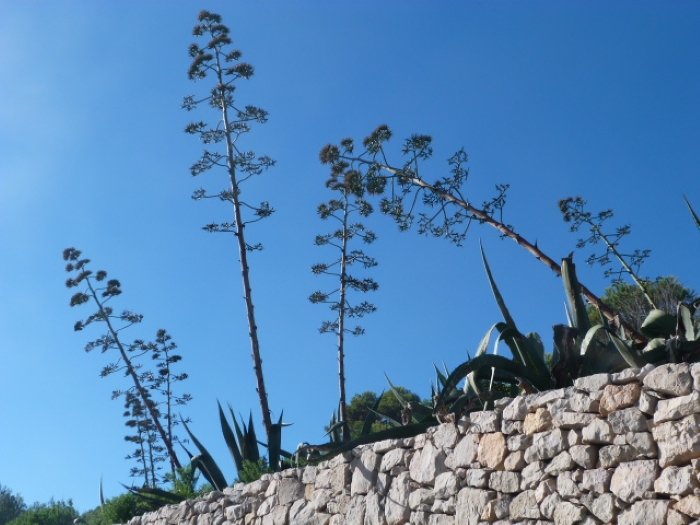 After a while the path levels out onto an open flattish area of rough low rocks with a smartly renovated wall on the right.  You get the feeling someone really big lives here judging from the number of security cameras and you’d be right.  The Château de la Croë, once home to the Duke and Duchess of Windsor and known locally as The White House, is now in the hands of Russian squillionaire Roman Abramovich, owner of Chelsea Football Club. 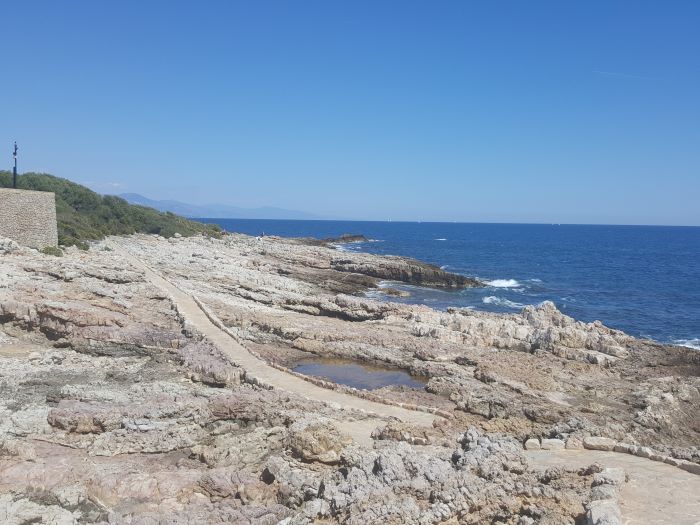 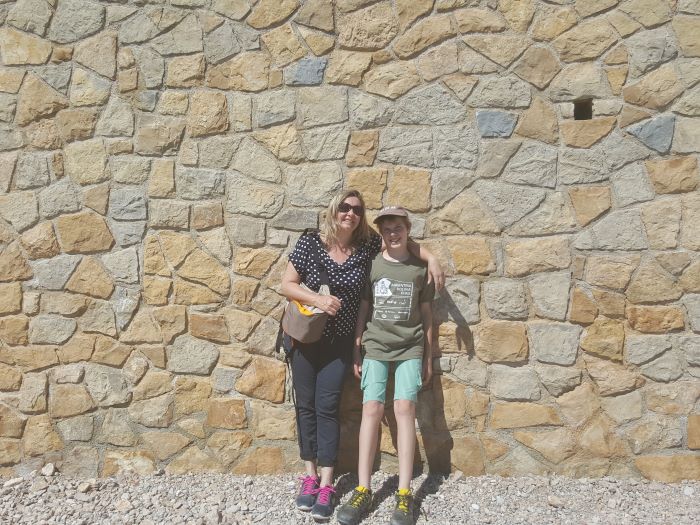 On this bit of the coast walk on the Cap d’Antibes you’ll notice a round concrete block, a sort of lookout, at the end of a path heading out towards the sea.  This is all that remains of a failed attempt by Abramovich to build a pontoon to moor his yachts at. 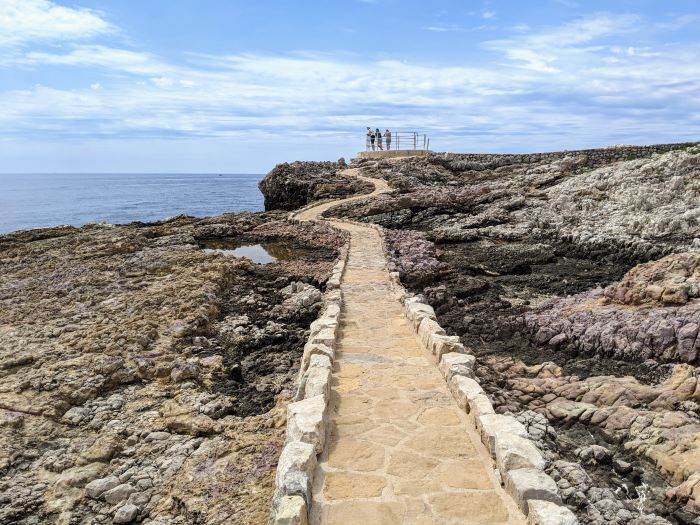 In a true David and Goliath story a local sea urchin fisherman pulled the plug on these illegal plans as no one, not even Roman, has the right to build up to the water’s edge.  The irony of this is that now that all the curious walkers can spy into his property as the concrete block serves as a viewing platform without which his house would have stayed truly private. 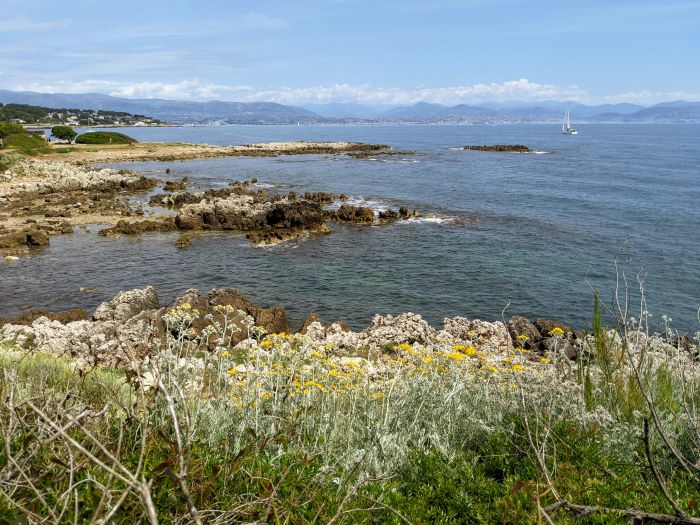 You now have a choice to make the walk a little shorter by heading inland between two high walls separating two enormous properties: the Villa Eilenroc on the left and le Croë on the right.  I couldn’t help thinking as I walked along here that the budget for Roman’s security alone, and perhaps just along this section of his boundary, was undoubtedly more than my own house, Lou Messugo, is worth. 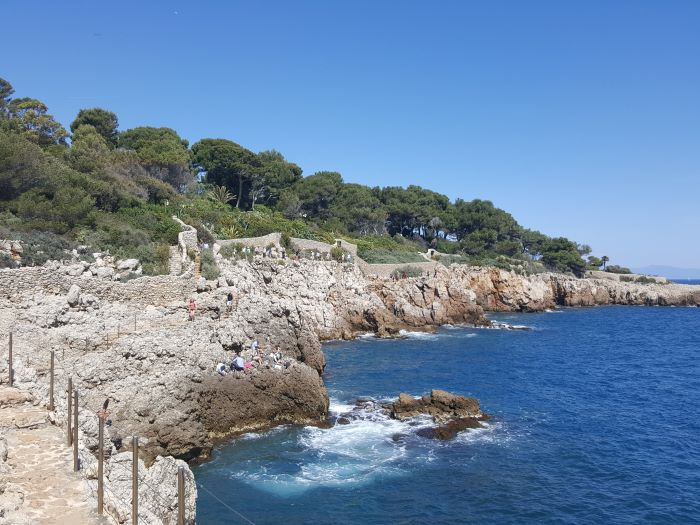 The wealth in this part of the Riviera is astounding and at times overwhelmingly vulgar but it only goes to highlight one of the reasons why this walk is so lovely; the contrast is so unexpected.  The Cap is wild and untouched, almost fierce in its beauty, yet it’s bang in the middle of one of the most heavily developed parts of the French Mediterranean coast. 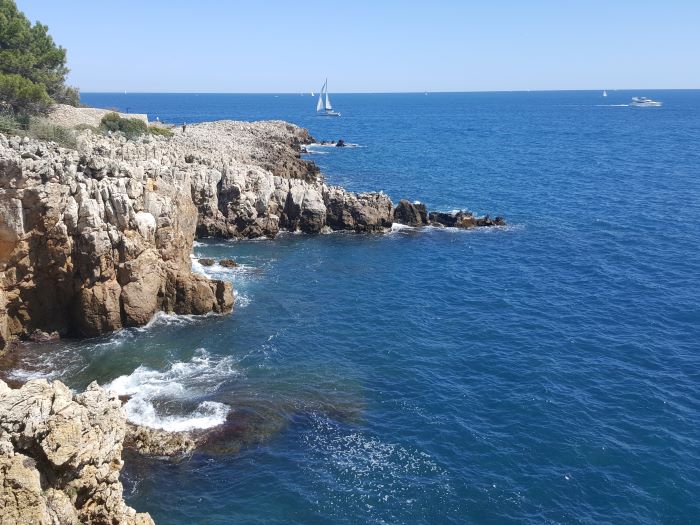 If you choose to return at this point the last part of the walk is along the street.  Take Chemin des Douaniers and then Avenue de Mrs Beaumont until you get to the main road and then immediately turn right into Avenue de la Tour Gandolphe.  This street is full of surprisingly modest old houses with smallholdings.  I’m sure the property developers would love to get their hands on some of this land but it’s certainly refreshing to see that some ordinary folk still live here.  I wonder for how much longer?  At the end of this lovely street you’ll find yourself back at the car park where you started. 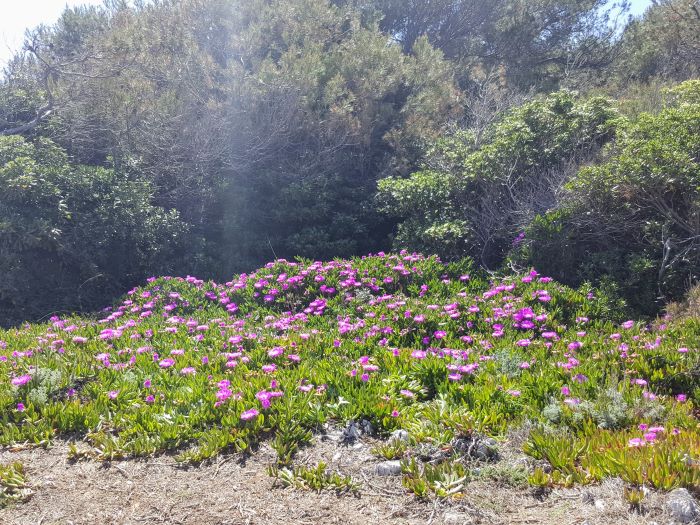 However, if you choose to continue along the coastal path you will be well rewarded with views of one of the prettiest bays on this part of the coast, la baie des milliardaires (billionaires bay!). Instead of turning up away from the water, go through a gateway just a couple of metres into the high walled path mentioned above, and you will find yourself in a shady part of the coastal path. 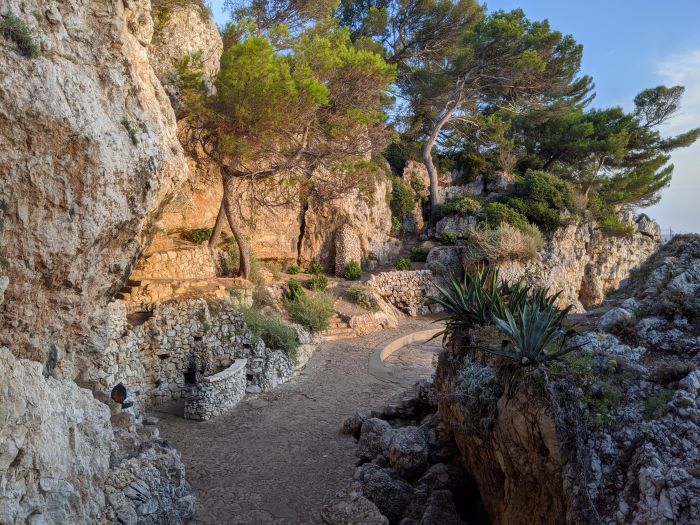 Continue following the obvious and well-marked path as it winds down through a section where, depending on the time of year, you might see daredevils jumping off the high rocks (like my crazy son below!). 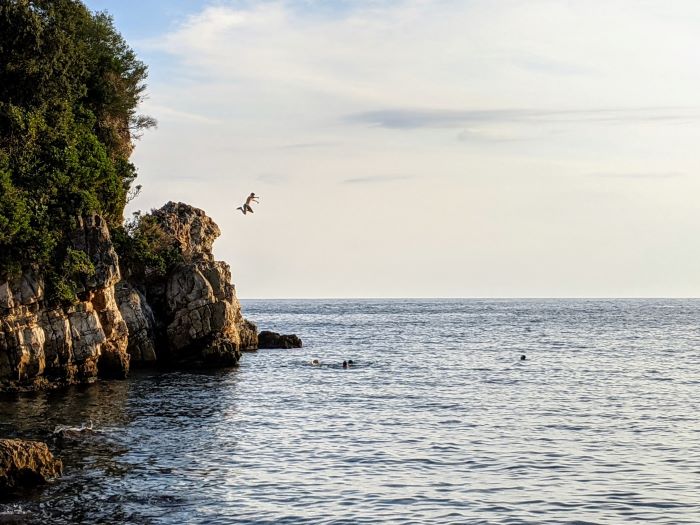 This area has a concrete platform and metal ladder into the sea which is great for swimming off.  You’ll see the remains of the summer kitchen from the Villa Eilenroc on your right before the path climbs steeply upwards. 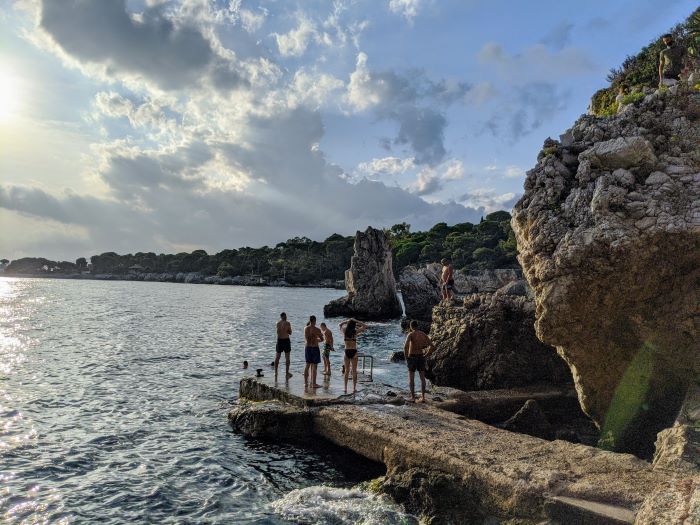 At the top of the steps on your right you get lovely views into the gardens of the Villa Eilenroc, with the villa itself visible too. The Eilenroc (an anagram of the original owner’s wife’s name Cornélie) was built in the 1860s but it wasn’t until the 1920s when it was acquired by an American couple Mr and Mrs Beaumont, that the gardens were landscaped. 27 acres of gardens! 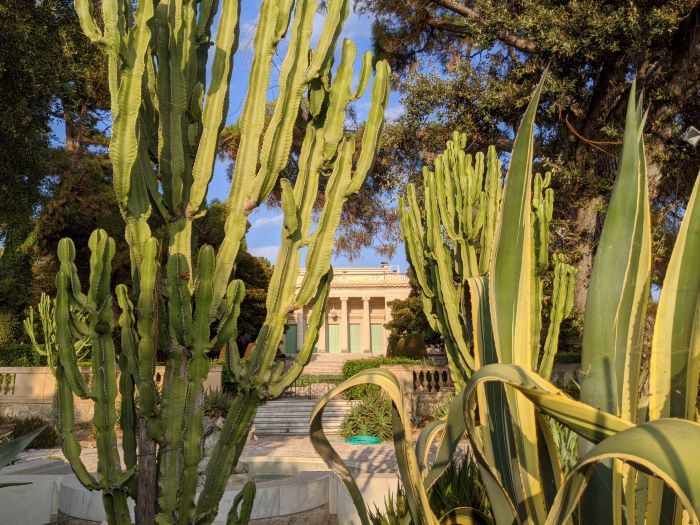 It’s hard to imagine how such enormous gardens can fit into such a heavily built-up part of the coast, but they’re open on Wednesdays and Saturdays if you want to have a look as Mrs Beaumont very decently bequeathed the property to the town of Antibes in 1982, on the condition that the gardens are to the public. 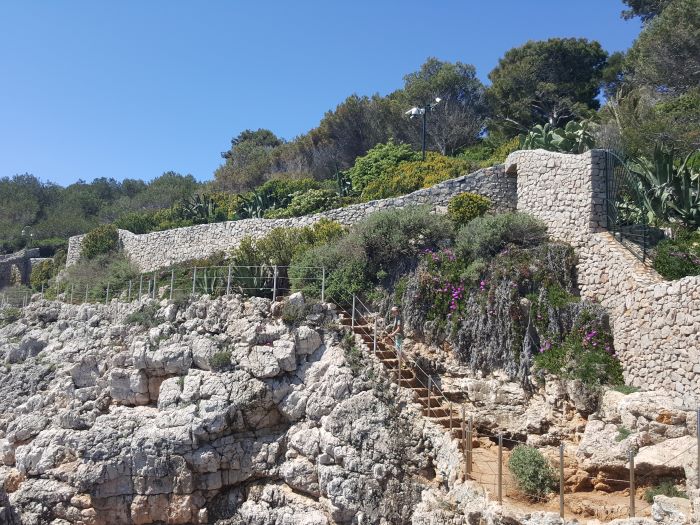 Saving the very best to last, if you’ve made it this far you will be rewarded with possibly the most picturesque bay in this part of the Côte d’Azur, certainly on the Cap d’Antibes: billionaires bay. The limpid water is always turquoise, the rocks glow golden in the sun, there are often a couple of well-placed boats and the perfectly-formed beach which appears to be white sand from a distance (though is in fact pebbles).

This really is the end of the coastal path, so unless you want to return the way you came, you have to take the deceptively steep path up away from the beach to Avenue de Mrs Beaumont and follow the directions already given earlier in the text. 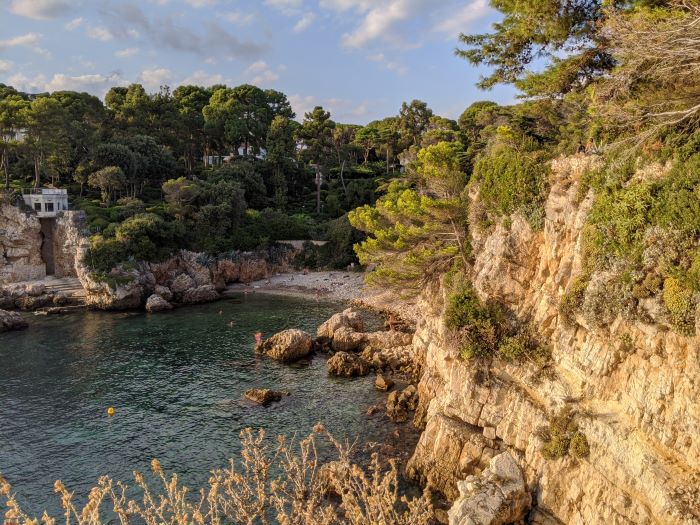 That’s my family’s favourite local hike, the coast walk on the Cap d’Antibes. Do you have a favourite walk?  Do tell!

This post was first published in November 2012 and has been updated. 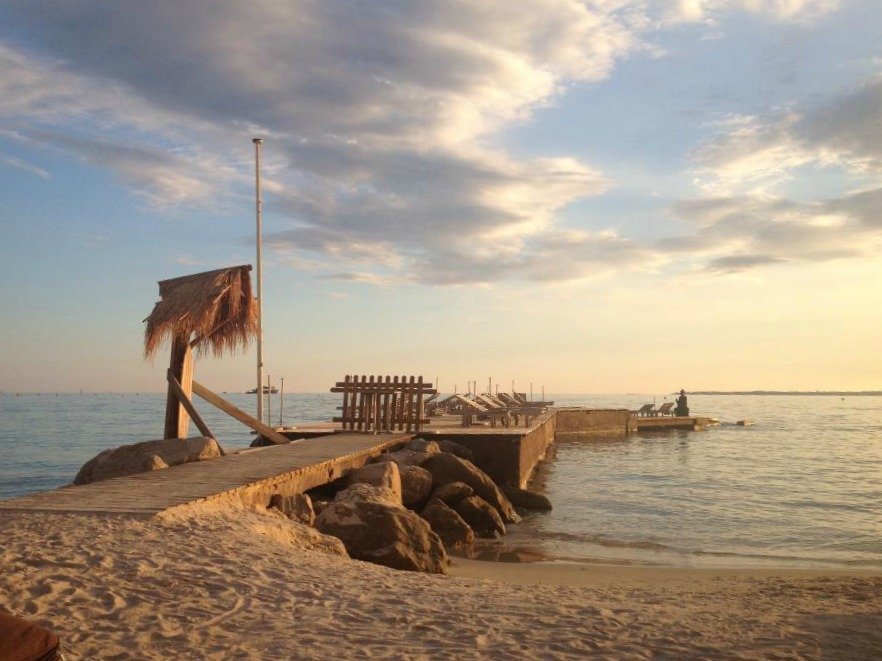