It’s December! Let the the build-up to Christmas begin! I know in parts of the world it has already begun with Christmas lights twinkling in London since the start of November and Christmas markets already open across Europe, but around where I live there is little sign of Christmas before December. And I must say I do kind of like it like this. When I saw the admittedly stunning festive decorations in Galeries Lafayette in Paris in late October it just felt wrong. This is partly related to the fact that I’d been wearing shorts and sandals until only days before as the weather in the south stays warm throughout October and therefore just isn’t conducive to festive thoughts, but also in part to my dislike of how commercial Christmas has become in general.

But don’t get me wrong, I’m not at all bah humbug about Christmas, I love it and the build up, I just don’t think it should start too early.  Some of the things I love are carol singing and carol concerts. Christmas markets, mulled wine, mince pies and hot chestnuts.  The rounds of Christmas parties, pantomimes, seasonal ballets like the Nutcracker and even the ever more ridiculous school Nativity plays.  Out of all of these France does markets, chestnuts and vin chaud very well and if you’re lucky you might find a performance of Casse Noisette (Nutcracker), but there is no tradition of panto, carols or Nativity plays and certainly no mince pies!  And despite having lived all over the world and for 17 years in France, these are things I miss and still hanker after at Christmas.

Christmas in France has always seemed to me to be a more low key, traditional family affair than in England.  The build-up just isn’t as full-on.  Let’s take schools for example.  As French state schools are by law secular there is absolutely no form of Nativity play, not even with penguins, cowboys, trees and other extras that English schools add in to get around this!  Your child’s class might put on some form of show but it will have nothing to do with Christmas, perhaps a multicultural dance performance as seen in the photo of my son below.  There is usually a special meal somewhere towards the end of term billed as a Christmas meal but it is different every year as apart from bûche de nöel there isn’t really a “traditional” Christmas meal like there is in England.  Obviously many families create their own traditions and it is usual to eat certain things at Christmas like oysters, smoked salmon and foie gras, but there just isn’t the same emphasis on the “traditional” roast turkey with all the trimmings.  And before I digress completely into food, another huge difference for me is that owing to how little parents are involved at school sometimes schools put on shows just for themselves without inviting parents to watch. 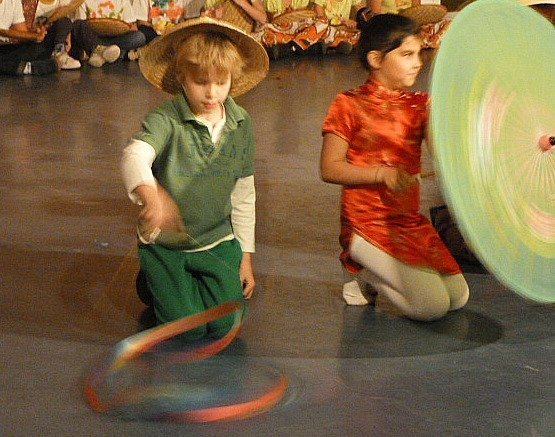 Carols are an integral part of the Christmas experience for me and I’ve tried to pass some of my love for them on to my sons, but it hasn’t been easy.  They recognise most tunes now as I blast them out every year while decorating the tree and throughout much of the festive season but they don’t know the words and couldn’t really care less.  Carols barely exist in France and the tradition of carol singing from door to door or in village squares is unheard of.  Luckily for me living in such an international area with a high presence of Brits there are usually one or two carol concerts on in December which I try to get to. 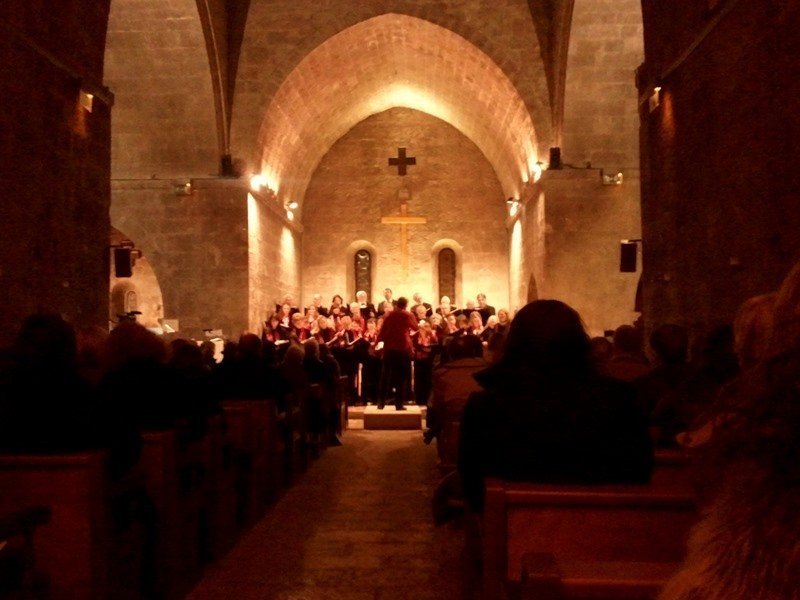 France doesn’t really have the dreaded wonderful office Christmas party that is such a part of British working life in December.  This is mainly because professional and social lives are much more separate in French culture than Anglosaxon and it’s not so common to socialise with your colleagues, and if anything is to be celebrated within work it’s more often the new year than Christmas.  (I touched on this here).  But it’s not just office parties that are missing in December, it’s parties in general.  Amongst my French friends and family there is really very little difference in the social scene in December from any other time of year. There aren’t the manic rounds of Christmas drinks that mark the build up to the big event in England, but this is where the expat community comes into its own.  Everywhere I’ve lived there have been plenty of just such parties held by foreigners clinging to their home traditions which has meant that over the years I’ve been to Swedish, Dutch, German, Icelandic and Czech celebrations to name a few as well as plenty of British parties! In fact back in 1994 in a bid to feel “christmassy” my flatmate and I held a Christmas drinks party in Hanoi, serving mulled wine, which JF and I have carried on every year except one, I think, since then.  Our “vin chaud” party has become quite a tradition with friends coming from as far as London, Geneva and Paris to get into the Christmas spirit with us. 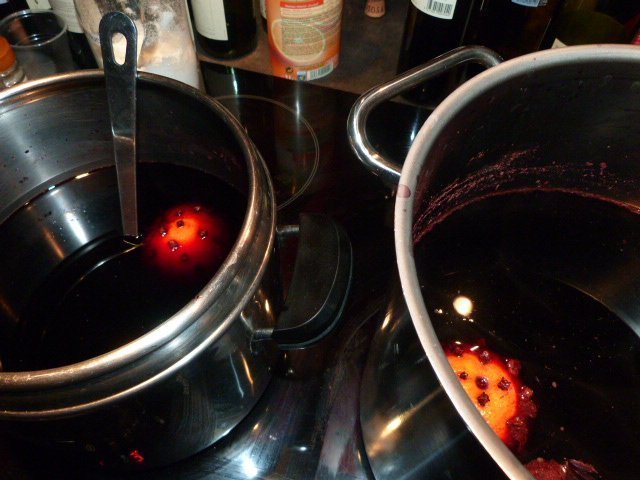 One of best ways we as a family get into Christmas in the south of France in December is to visit the varied and wonderful Christmas markets in the region.  Most towns in the area have one, whether just for a day, weekend, or several weeks.  It’s unlikely to be snowy or even very cold but that doesn’t stop the festive atmosphere when the smells of cinnamon, spice and roasted chestnuts fill the air.  We haven’t been to them all by any means but some of our favourites are Nice for a ride on the big wheel, Le Rouret for its traditional theme, Monaco to skate on the harbour amongst the superyachts and Valbonne for its original entertainment (often light shows). For a fairly comprehensive list of all the markets and their dates in the Alpes Maritimes click here. Another gorgeously atmospheric and unique way to find the Christmas feeling is to visit the hilltop village of Lucéram which is decked out with over 400 crèches from now until Epiphany, the 6th of January. As an antidote to the excesses of commercial Christmas this stands in first place.  There’s nothing for sale, nothing to spend your money on, just miniature displays of village life and Nativity scenes made with traditional Provencal santons wherever you look.  On a bright sunny winter’s day it’s a magical experience.  For more details take a look at the piece I wrote on Lucéram, the Christmas village. 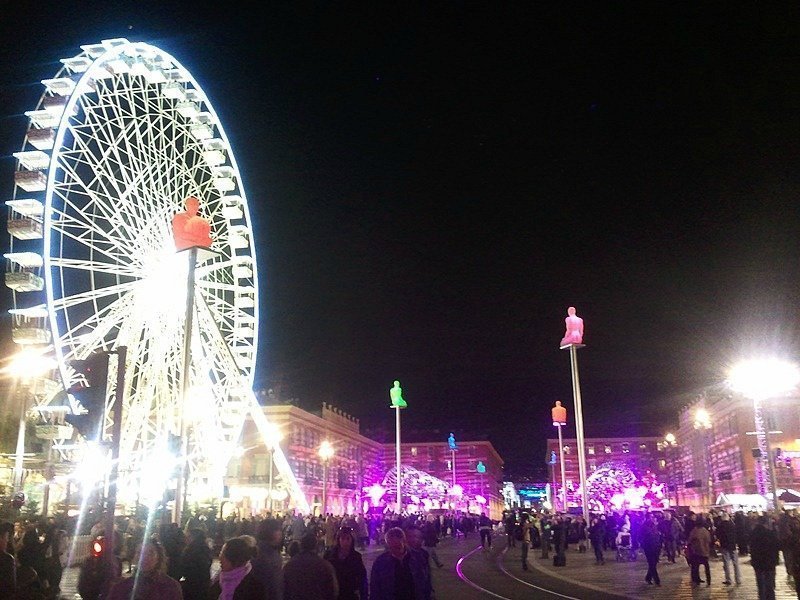 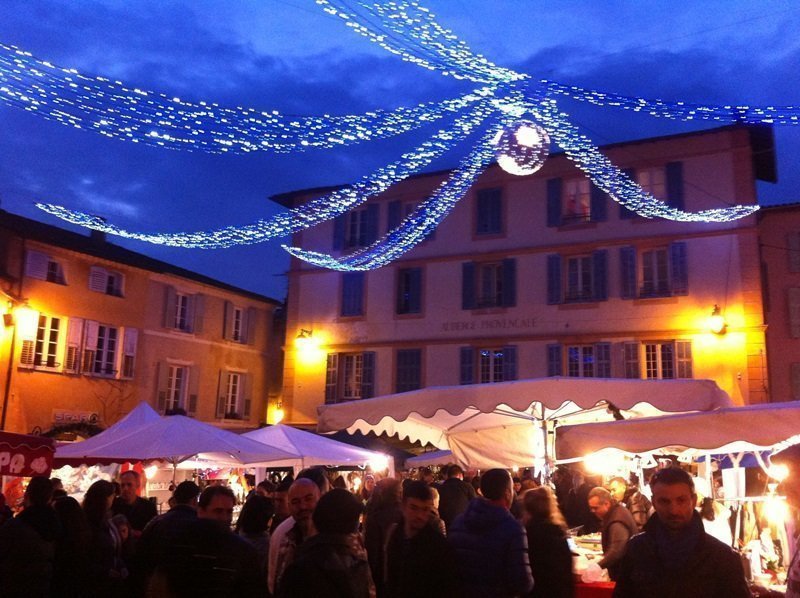 Over to you.  When do you like Christmas to start?  If you’re living or have lived out of your home culture what traditions do or did you miss?