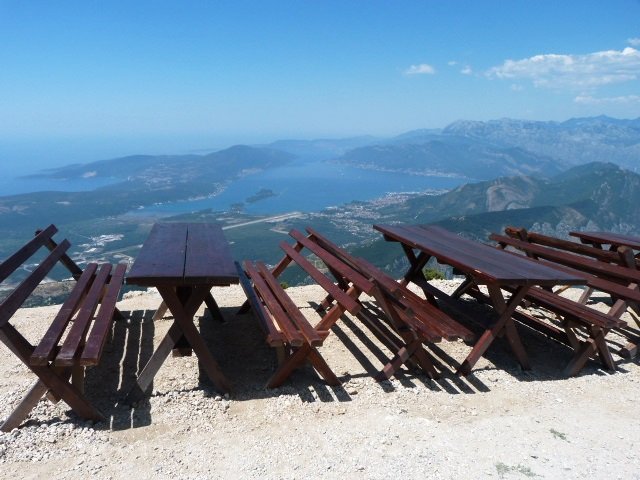 Often described as one of the world’s most dangerous drives as well as one of the world’s most scenic routes, the road between Kotor and Cetinje in Montenegro – the Lovćen road – is certainly jaw-droppingly beautiful.  As a family we love a good road trip and our journey through Croatia, Bosnia-Herzegovina and Montenegro by car, included driving over this stupendous mountain road.

It was with some trepidation that we set out from Kotor as we’d read that this “white knuckle ride” was “insanely precipitous”, didn’t have any safety barriers and was for the most part single lane despite being two-way.  But we live in an area with some pretty hairy mountain roads and have driven in some fairly crazy places in the world so despite a slight sense of nervousness we were definitely excited. 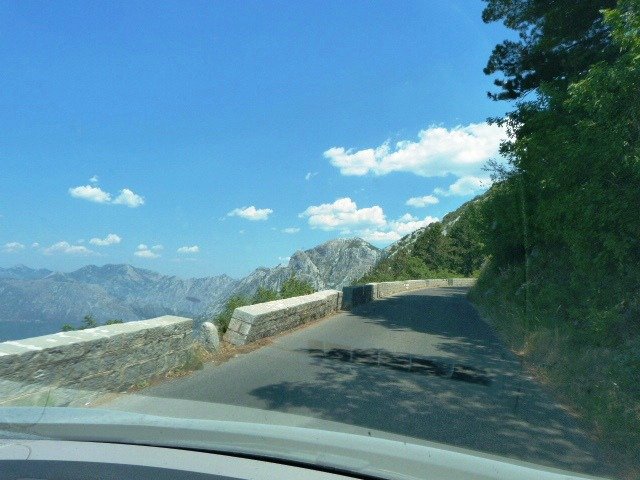 The road from Kotor Bay over Mt Lovćen, the black mountain from which the country is named (“monte” or “gora” = mountain “negro” or “crna” = black), to the ancient capital of Cetinje was built in 1879 by the Austro-Hungarians.  It involves driving around 25 hair-raising hairpin bends as it rises steeply above the bay, each switchback providing increasingly gorgeous sweeping vistas across Boka Kotorska, the Luštica peninsula, over to the Adriatic sea and on to Croatia. 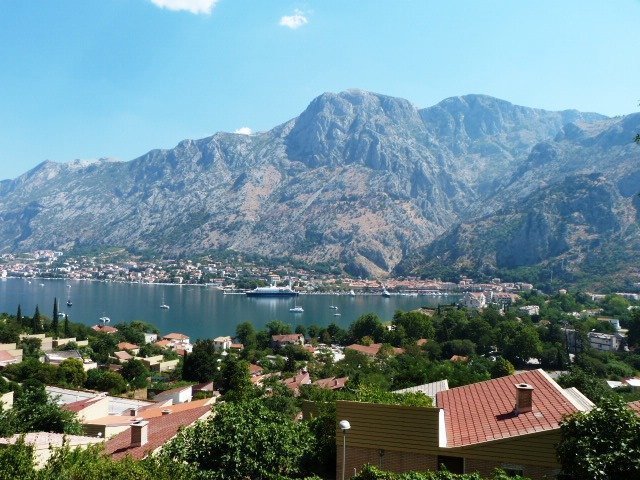 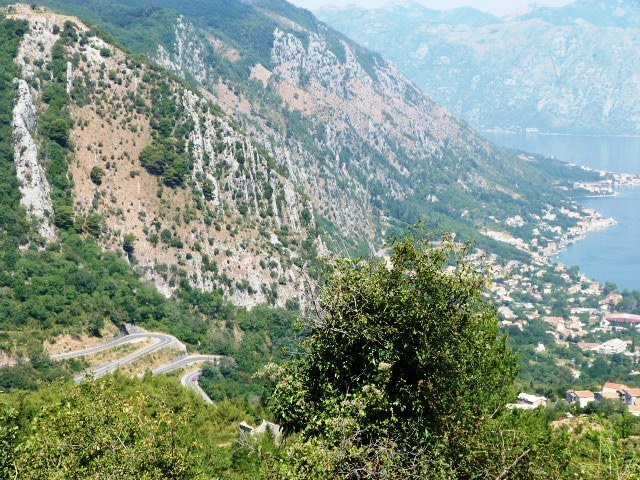 It is these spectacular views which give you the courage to continue driving up and up as the road really is narrow and it’s highly alarming passing traffic coming in the other direction, often with no form of security barrier at all. 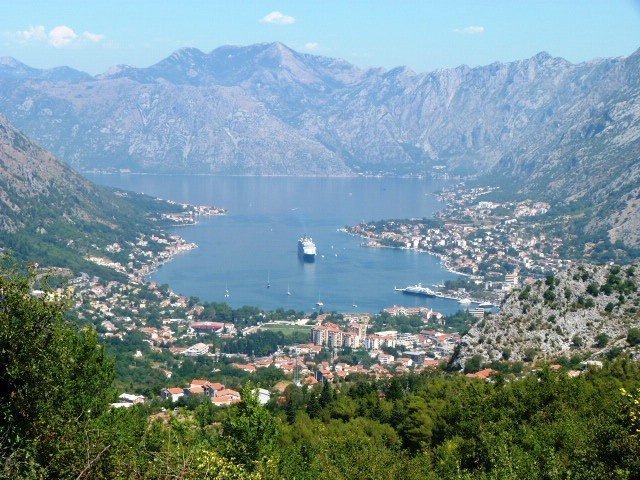 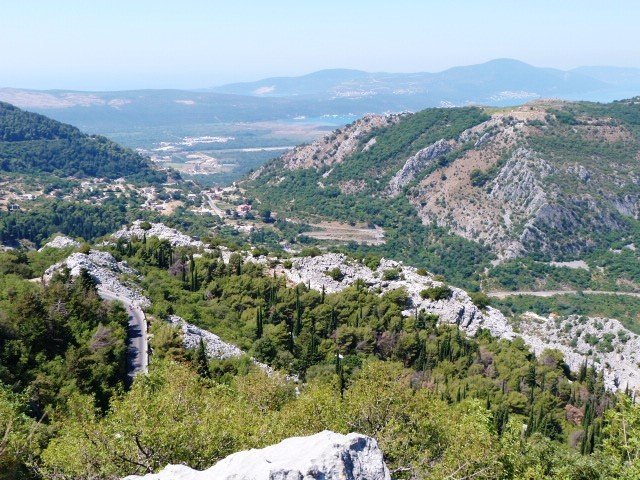 After a short while we found ourselves behind a bus but despite our initial disappointment at not having uninterrupted views infront of us we soon realised the advantage of being behind a large vehicle.  It ploughed on up barely giving way to oncoming traffic, making all descending cars reverse out of the way for it, while we snuck in behind.  It was with a great sigh of relief that we reached the top without having to back up for anyone! 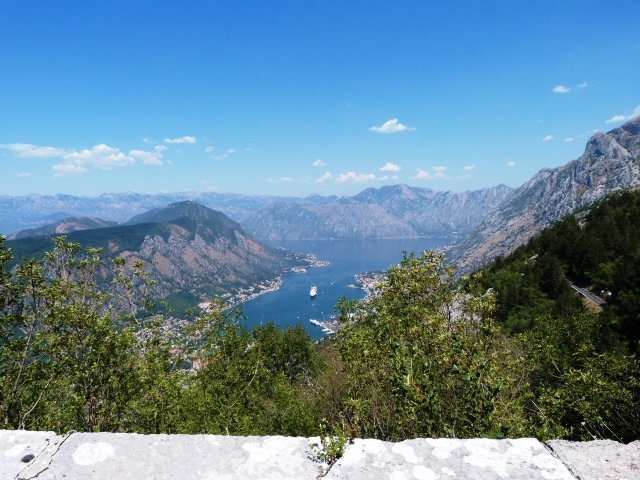 On the ascent we passed a couple of phenomenal picnic spots, with crazy stand-up tables and sheer drops.  I’m glad my youngest kid was 8 and not a toddler, but even so his standing on the edge gave me the willies. 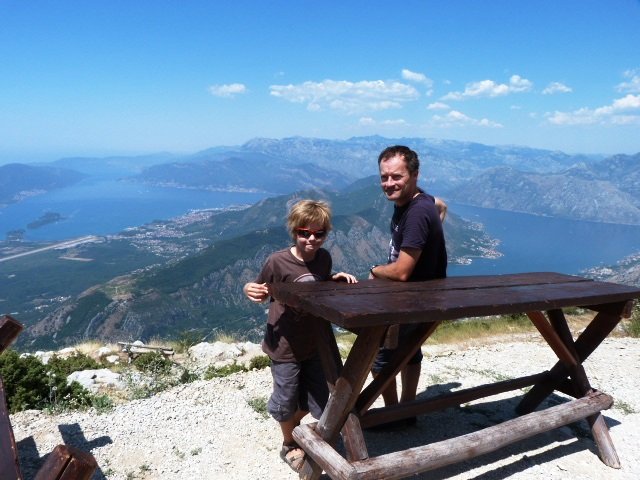 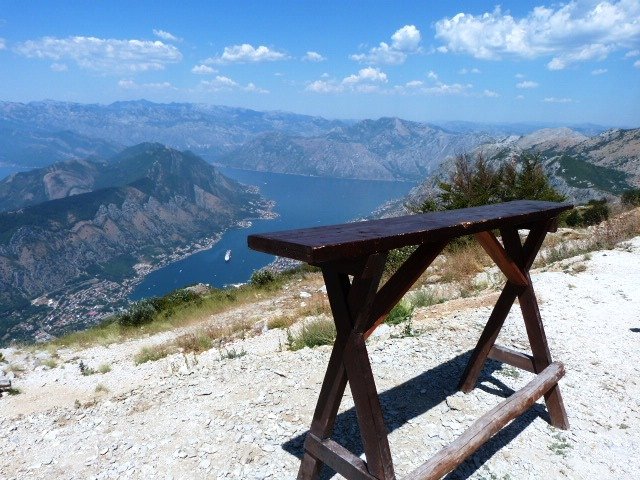 We also passed a restaurant with a perilous-looking terrace and million dollar view. It was closed so I didn’t have to face my vertigo demons and have a drink there, thankfully! 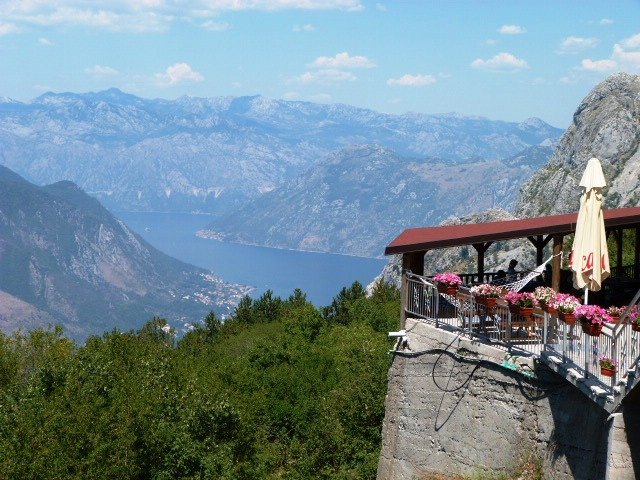 There were one or two isolated houses dotted about and we wondered at how often they might just have to pop out for a forgotten litre of milk and what a drive it was to get the groceries when we also passed a number of cows ambling along.  Perhaps that’s how they got their milk? 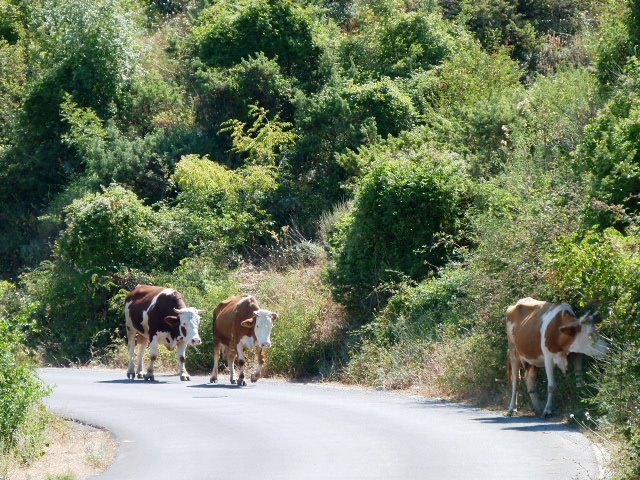 The road finally leveled out and cut across a rocky plateau, but even here it was alarmingly built a couple of metres above the surrounding meadow resulting in a nasty drop if you were to misjudge the width when passing an oncoming car. 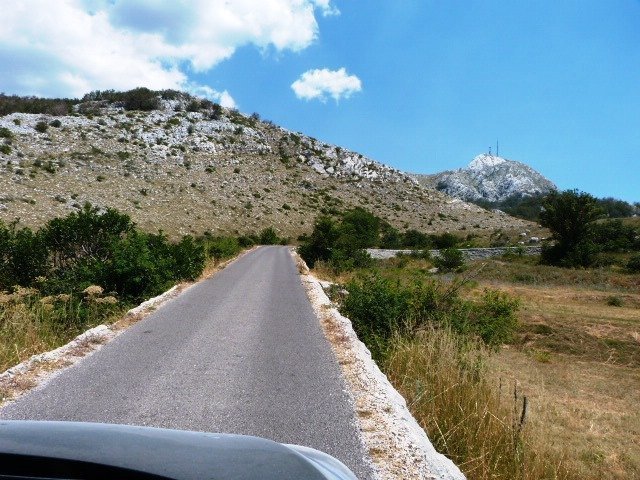 Midway between Kotor and Cetinje at the summit of the second highest peak in the Lovćen National Park (1657m) lies one of the most revered places in Montenegro, the mausoleum of Petar II Petrović Njegoš, Montenegro’s most venerated poet/philosopher.  This stark but magnificent structure sits at the top of 461 steps, guarded by two stone female giants.  Njegoš is buried deep within it beneath a massive granite sculpture of him reclining in the wings of an eagle, under a golden ceiling. 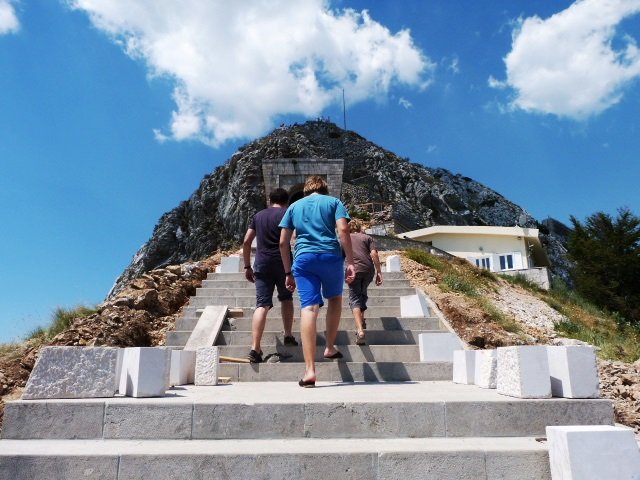 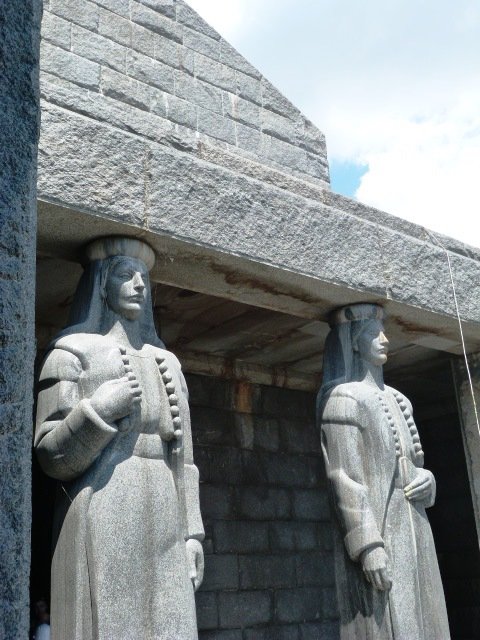 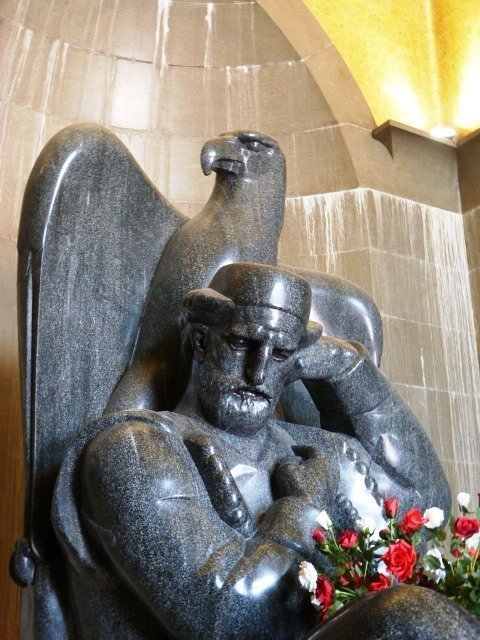 When we visited the site was under renovation and the steps were partially closed leaving us to scamble up a rough path at the side.  In a nod to health and safety procedures a handful of hard hats were provided which had been studiously ignored by everyone else but us.  JF, being the engineer he is and never knowingly going anywhere without a hard hat (not!) kitted out himself and the little kid much to the embarrassment of the teenager and amusement of other visitors. 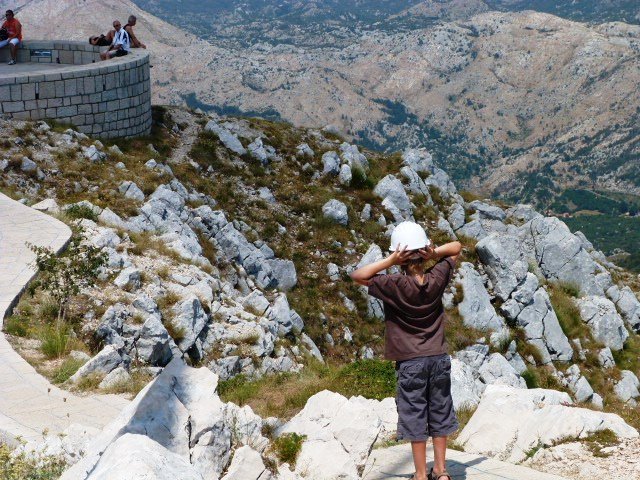 At the back of the mausoleum a path leads to a circular lookout offering remarkable views over the Lovćen National Park and most of Montenegro. 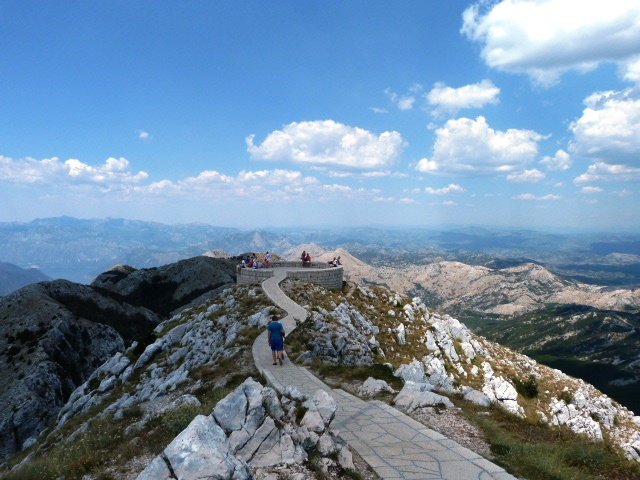 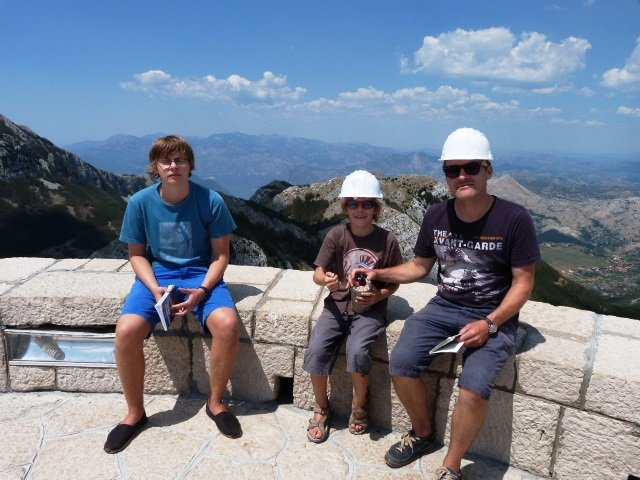 The spectacular views are endless in every direction famously causing George Bernard Shaw to wonder “am I in paradise or on the moon?” a century ago.  I doubt much has changed since then, there are no signs of modern development or human interference (the mausoleum aside!) 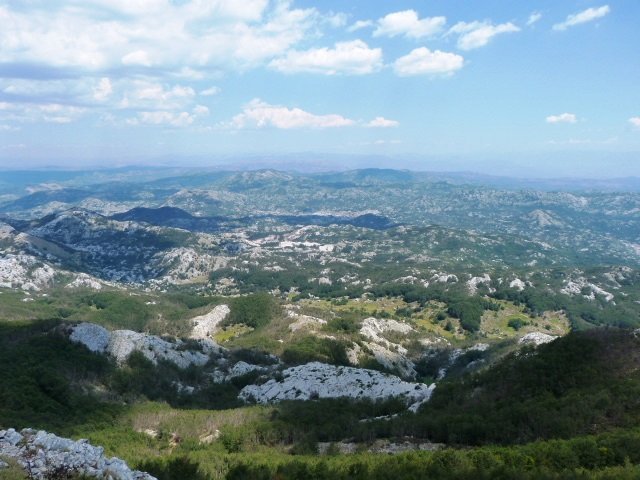 Visiting the mausoleum is free and there’s a restaurant perfectly placed on the side of the mountain with yet more gorgeous views.  We stopped for a drink at this one as it wasn’t quite as vertiginous as the one we passed climbing up the mountain. From the front of the mausoleum you can see right over to Lake Skadar which was the next stop on our tour of Montenegro. 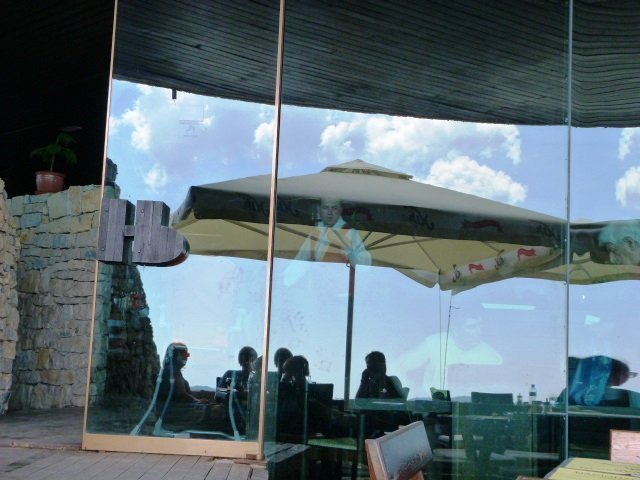 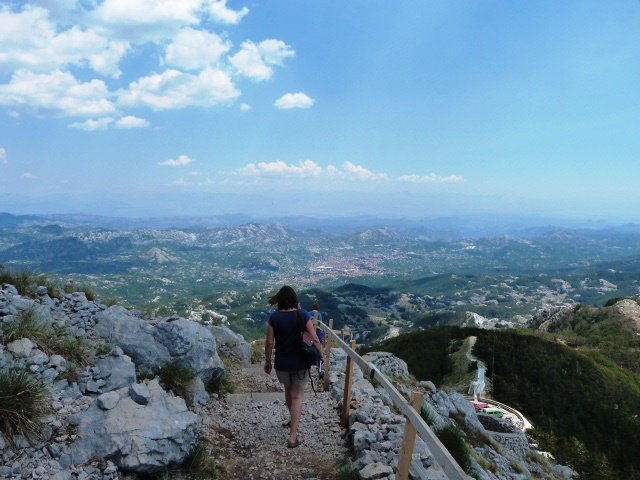 Lake Skadar is in the far right of the picture above where you can just make out 2 tiny volcanic-looking domes (much more visible with the naked eye than in this picture!) 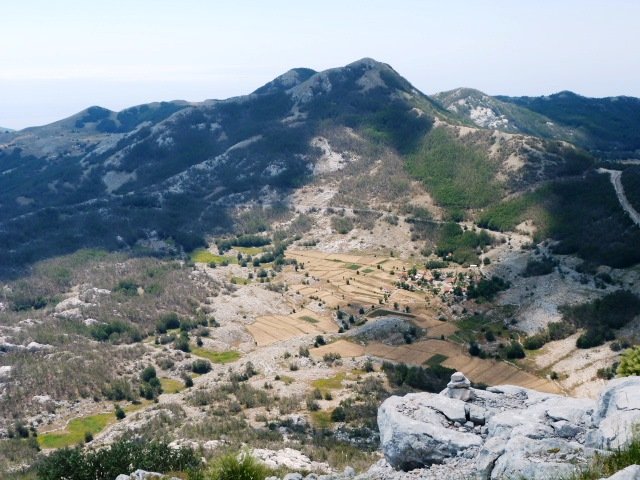 Leaving the mausoleum we continued on through the former capital of Cetinje towards Lake Skadar.  The countryside was less dramatic, no longer terrifying, rather it was bucolic, calm and peaceful, and still strikingly pretty. 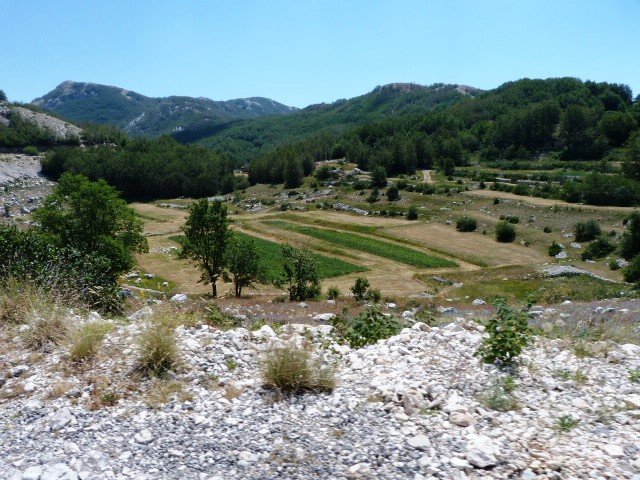 Montenegro is without doubt one of the most astonishingly beautiful places I’ve ever seen; my photos really do not do it justice and this road trip over the black mountain was one of the highlights in an astounding holiday.

Have you been to Montenegro?  What are you waiting for!

Postcards from a French road trip 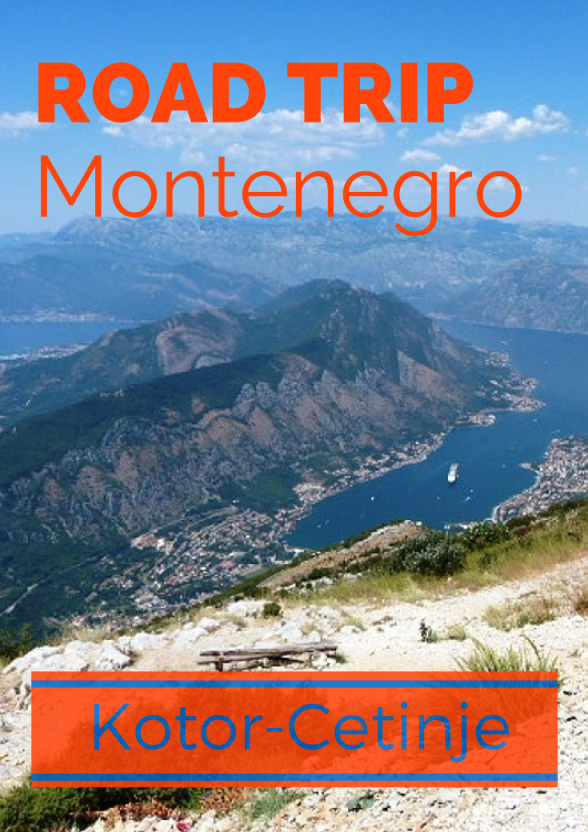 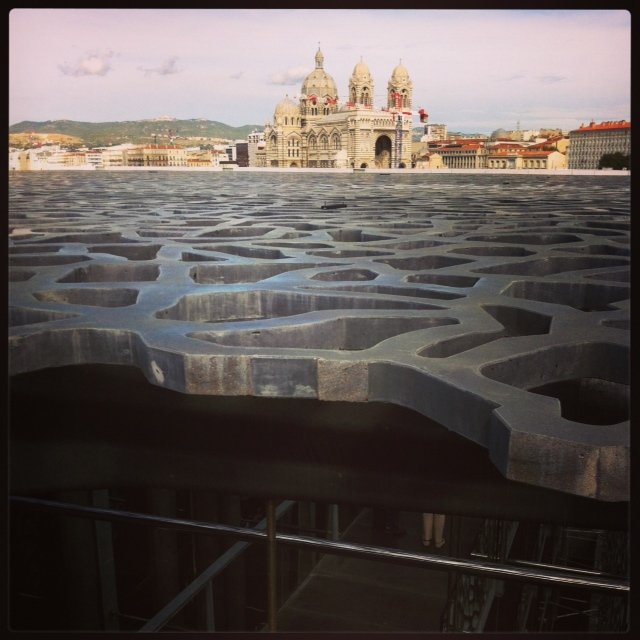 I'm not really a cat person as I'm very allergic,

On this miserable rainy day I decided that a #trea

Today's prompt from #lovemyfrenchstyle is #outdoor