Every year in early autumn in the Alps animals that have spent the summer grazing in high pastures are brought down to the valleys for the winter.  This movement of livestock is called transhumance and in many villages it’s the perfect opportunity to get together and celebrate; a great excuse for a fête.  A couple of weeks ago, with a less than inspiring weather forecast and only a few hours available, we decided on the spur of the moment to go and experience a transhumance for ourselves in a gorgeous little hill-top village.

We loaded up the car with rain gear and warm fleeces as we would be at about 1500m altitude, it was October and rain was expected.  The heavens were supposed to open on us just as the fête was due to start but don’t you just love it when the forecasters get it completely wrong, in your favour?  By lugging around winter clothes, we seemed to be guaranteed sun and warmth, perfectly lighting the exquisite autumn colours in the forests around. 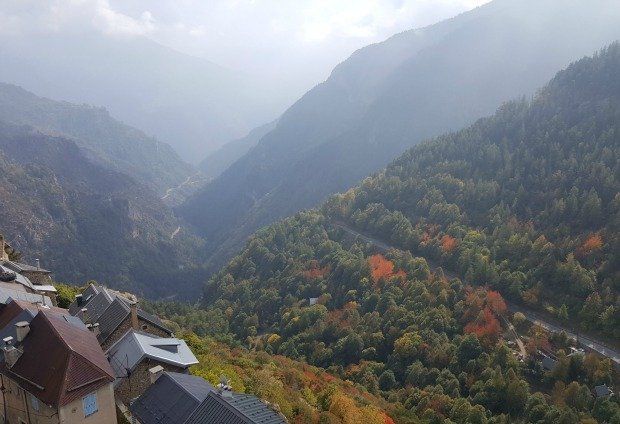 The fête de la transhumance we went to was in Roubion, a medieval perched village about 90 minutes (scenic) drive from home.  Although we’d been to the village a few years ago, we’d only been to the small ski resort a couple of kilometres from the old centre and we hadn’t actually explored the village itself.  I remembered a hairy narrow road and some precarious houses clinging to the cliff, and a wonderful Auberge on the ski slopes, that was about it.  Well, suffice it to say the road is still very “hairy” though we’re much more experienced driving on these alarming narrow mountain roads now than we were back then, and the village really is perched.  It’s almost vertical and it needs to be added to my list of top hill villages to visit near Nice, it’s tiny and full of charm. 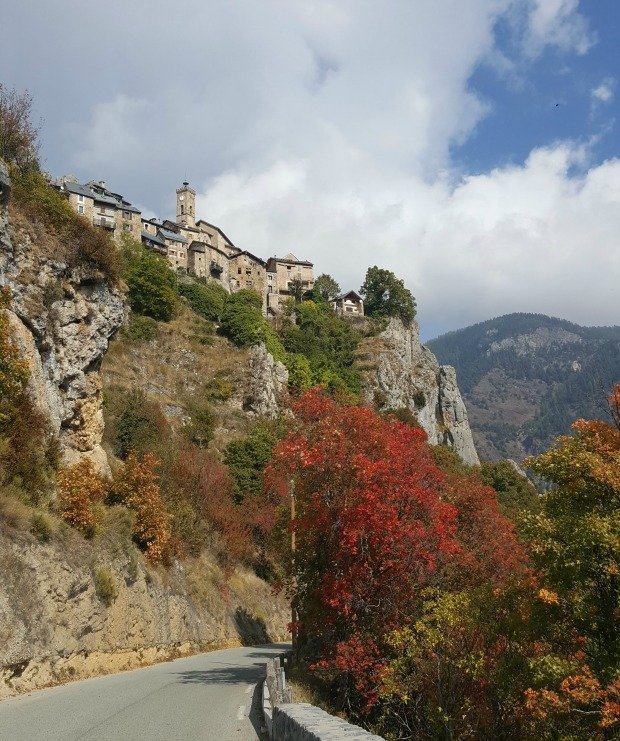 We arrived in Roubion at the end of the morning and by the time we’d parked and walked into the centre the four communal was just selling its last loaf of bread!  As part of the festivities the traditional communal bread oven, no longer in regular use, was baking loaves but we missed out by seconds!  Not to matter, we went in search of the best viewing point for the arrival of the sheep, passing a traditional Provencal band playing pipes and drums, and before long the action got going. 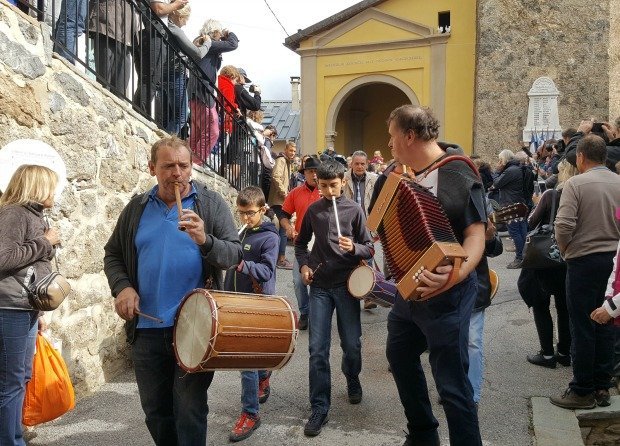 Preceded by the musicians and a couple of shepherds about 2000 sheep herded through the narrow alleyways of the village.  Sheep being sheep, they pushed and shoved and bleated along in a tight flock, looking bewildered and getting faster and faster as they squashed along.  TV cameramen bustled along with them filming for the local news and then it was over.  As quickly as they’d arrived, the sheep had moved on, leaving a trail of little round poos in their wake.  The idea then was to follow the flock to the ski area about 2 kilometres away where entertainment was provided including sheepdog displays and food stalls. Unfortunately, though we were short of time, having to get back to do a check-out and changeover in the gite before new guests arrived in the early evening, so we couldn’t continue along with the sheep. 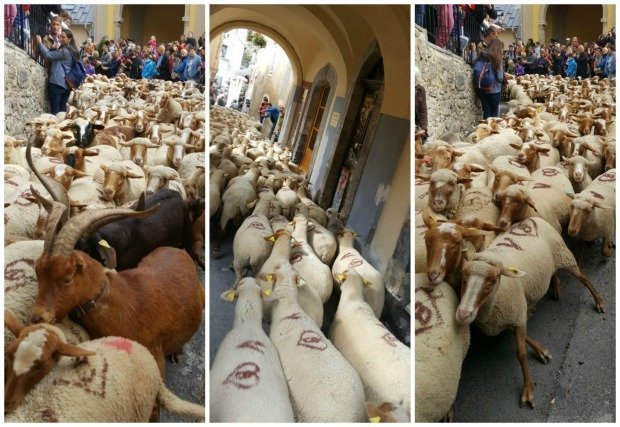 As the sun was out we grabbed some sandwiches and decided to climb up to the top of the village for lunch before heading back to the car.  Over the years we’ve visited many hill villages in the Alpes-Maritimes but never tire of exploring more, as each one has its own character.  Roubion, as I mentioned before, is practically vertical, with steep narrow paths leading up and down in the most higgledy-pickledy fashion I’ve ever seen.  My bilingual Frenchy husband and kid learnt a new word (expression?) that day… I’m not sure if I’d ever used it before, but it struck me that it was exactly the right way to describe the village.  Paths led up and down wherever you looked, almost Escher-like, a reference my 12 year old understood having visited the M.C.Escher museum in The Hague during the summer! 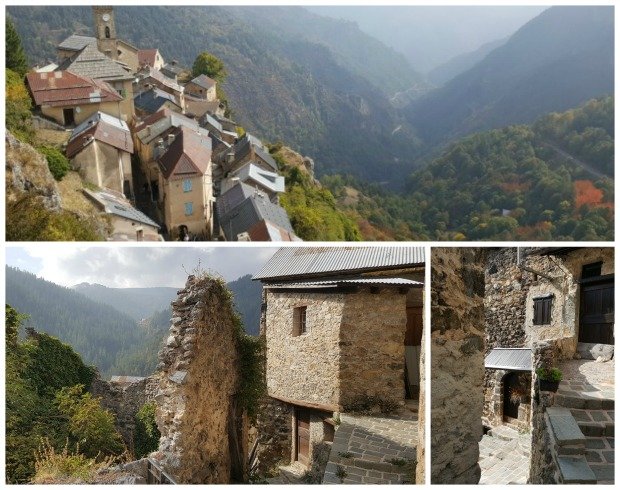 Houses in these hill top villages are often decked with flowers and succulents, growing out of the tiniest places, but this time we were charmed by an unusual feature that we’d not seen before – many buildings had naïve paintings of traditional country, mountain and village scenes on the doors, walls and shutters. 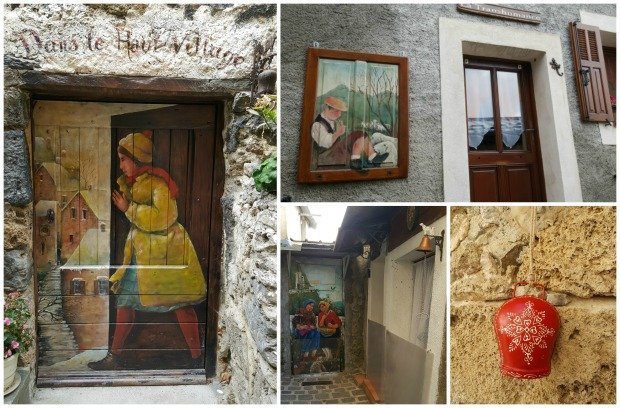 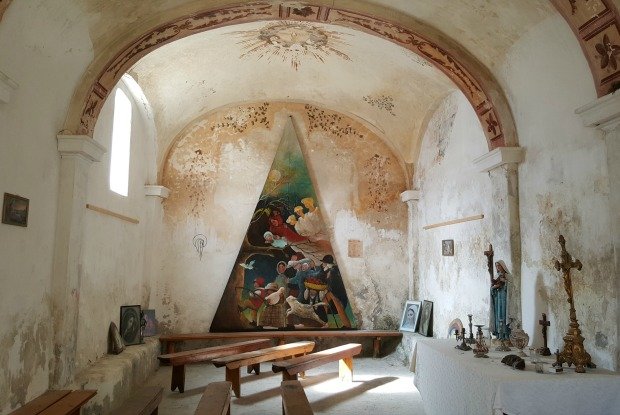 We climbed up past a curiously laid-out painted chapel and several ruined buildings under an impressive rocky outcrop, high above the village to be greeted with glorious sweeping views of the mountains and valleys dotted with flamboyant autumn colours – some of the best I’ve seen in this area. 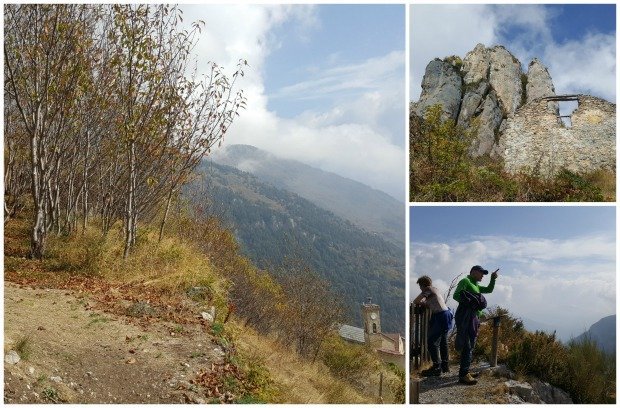 Loaded as we were with winter clothes we boiled in the hot sun and gulped down icy mountain water from the many fountains, for what we didn’t have with us was anything to drink (having believed that hopeless weather forecast!)  Sandwiches finished, we scrambled back down to the car and drove home. 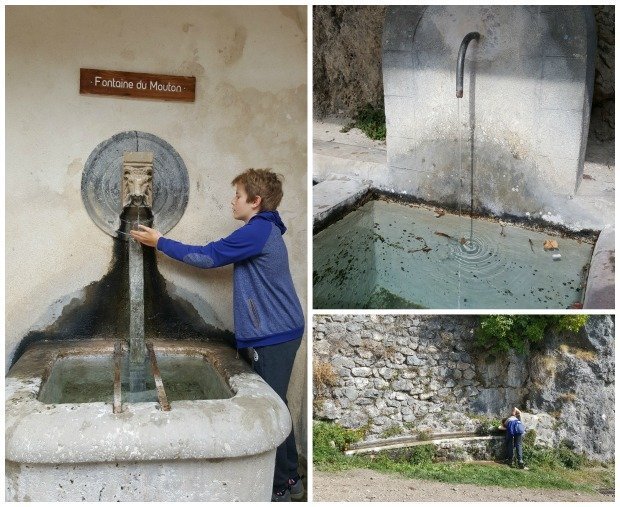 All in all we were out for about five hours – five hours of a complete change of scenery, in the mountains, surrounded by rich reds and yellows of autumn, and of course, the silly sheep.  And yet the following weekend we were back on the beach, basking in the blues of the Côte d’Azur. How can anyone fail to love this part of the world? 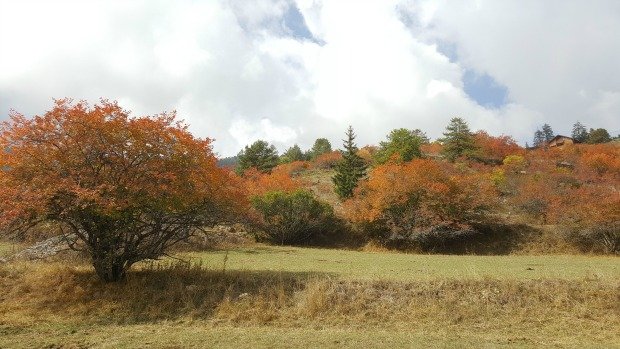 Have you ever been to a transhumance? Do you like going to these sorts of traditional events?  I’d love to hear from you.

You might enjoy these related posts:  13 of the best hill villages near Nice and Autumn pumpkin fair. 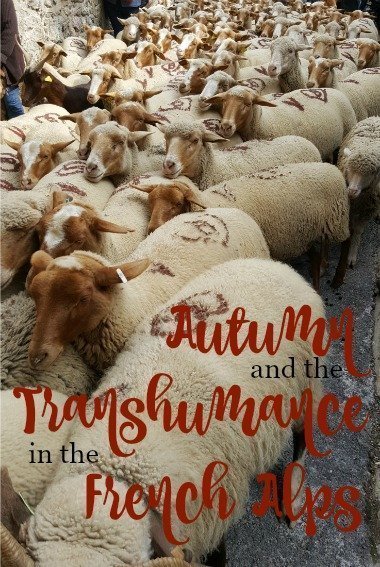