Carnival; it’s a big thing in France. It brightens up the depressing month of February with schools and towns across the country holding parades, people wear fancy dress and have fun. It’s the biggest time of the year for kids to dress up, although Halloween is pretty popular too. Before I lived here, carnival didn’t feature much in my life.  Although I’d been to a few around the world and had a ball – Sydney Mardi Gras, Notting Hill and best of all Trinidad (actually one of the most amazing travel experiences ever but that’s another story for another time) I mainly associated it with Rio and Venice. I had no idea at all how popular it is in France and that Nice Carnival is thought by some to be the oldest of all with the first written mention of it dating back to 1294.  It’s now the biggest annual event on the Riviera and one of the biggest carnivals in Europe. 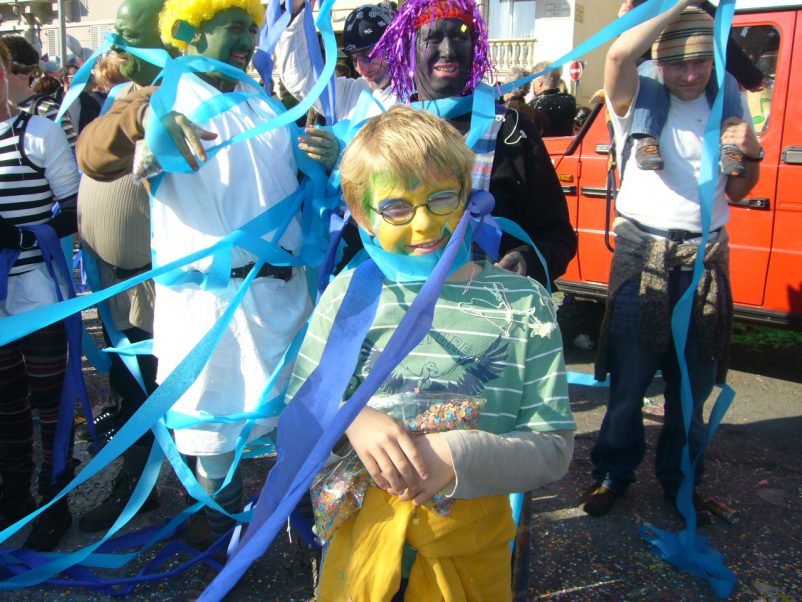 Carnival is originally associated with Lent, one last blow out before 40 days of fasting and reserved behaviour, which is why it takes place in the dreary month of February. Luckily for us in the south of France the weather is usually pretty good and every carnival I’ve been to in the last five years has taken place under bright blue skies and glorious sunshine. Couple the good weather with the colourful carnival floats and you’ve got a great tonic for seasonal depression. It always makes me happy, the kids love it and we go en famille to this big street party every year without fail.

There are two particularities about the Carnaval de Nice – one, that it takes place over 2.5 weeks (not just a couple of days) and two, that much of it focuses on flowers with its unique “Flower Battles“. Every 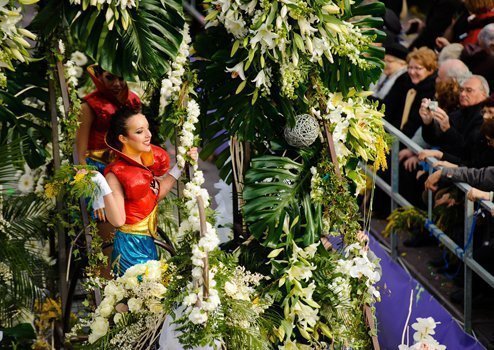 Tuesday, Wednesday, Saturday and Sunday during the carnival period there is something going on. There are day-time and evening parades of both the main carnival floats (Corso Carnavalesque) and the flower floats (bataille de fleurs). They last a couple of hours. Every year there’s a theme and 20 floats are created with giant burlesque, satirical characters, the “big heads” (grosses têtes) (usually around 150 in total) dominating each group. These characters can be imaginary or taken from real life, such as the British Royal family, the Pope, Zinedine Zidane and Putin (to name a few that I have seen recently). Each of the 20 floats has its gang of followers in coordinated outfits, including dancers, acrobats, marching bands, street performers and musicians. 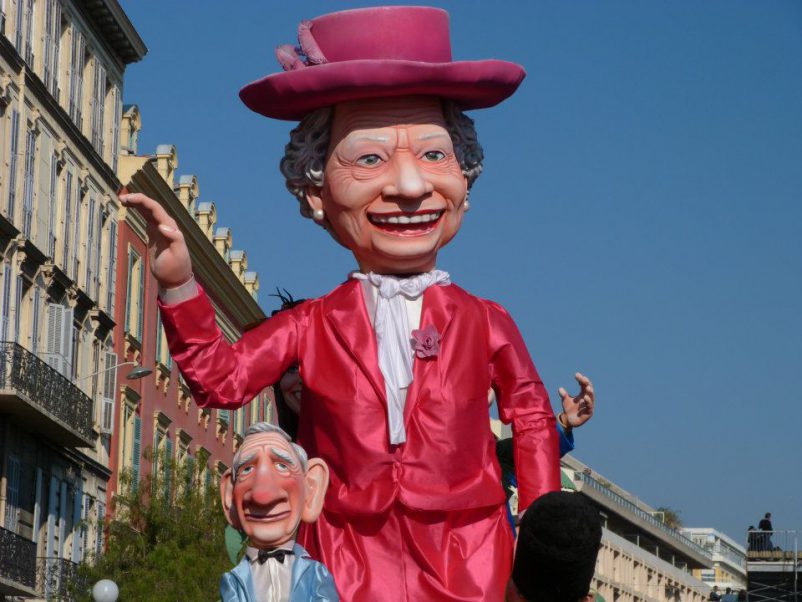 There are also participants from a dozen or so foreign countries often reflecting their national folklore and traditions. The flower floats follow the theme too but tend to be less parodying, concentrating more on the beauty of the flowers which are nearly all grown locally (90%) especially for carnival. Over the 2 weeks 100,000 are thrown out at the spectators from the floats in the “battle”. The aim is to catch a branch of mimosa or a lily and take it home. I’m torn between thinking it’s a shocking environmental waste and a beautiful, natural bit of fun. Whatever you think of it, it’s certainly unique.

During the parades you’ll find face-painters, stilt walkers, clowns and musicians wandering around in the park, Jardin Albert 1er, right in the middle of things. It’s always decorated with fanciful creatures or 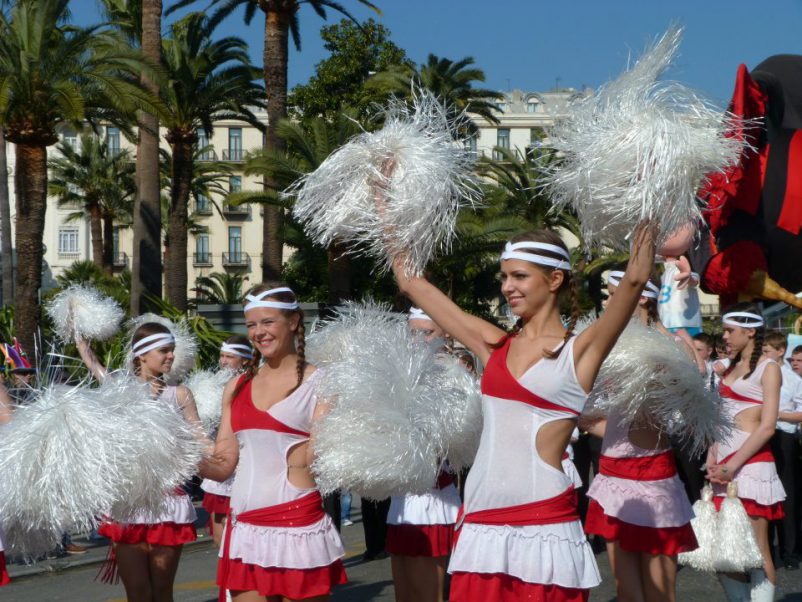 objects for the occasion too. One year there were people made out of leaves wherever you looked; climbing trees, sitting on benches, hanging on to balconies…. We always get there early to make the most of the fun, grabbing a slice of socca (a local niçois chickpea pancake – delicious!) for lunch and getting the kids’ faces painted. Most children dress up in fancy dress but it’s worth noting that you get in free to all paying events including the flower parades if you are in disguise! You can buy tickets to sit in the stands from where I guess you must be guaranteed a pretty good view but we never do. It’s so much more fun to stand on the roadside, mingling in with the carnivaleers, throwing 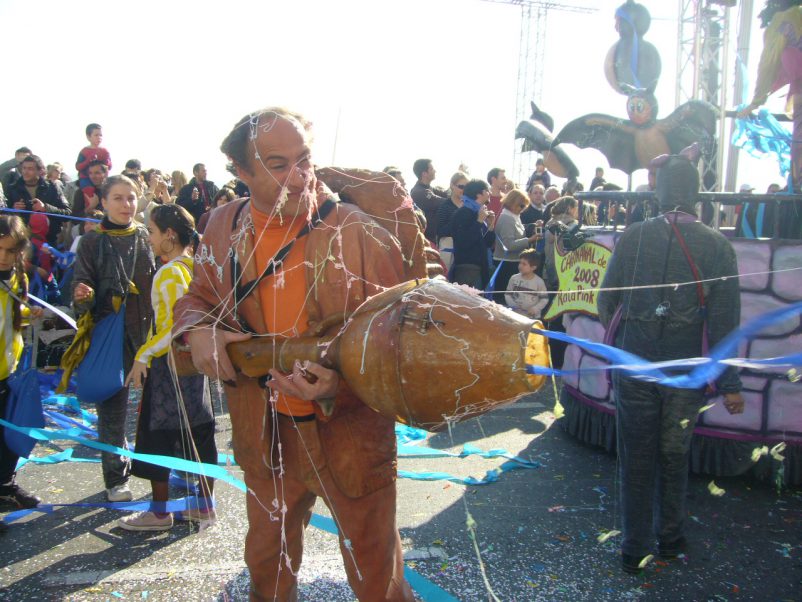 confetti and dodging the squirts of sillystring. Which brings me to my biggest bugbear about Nice carnival…call me old-fashioned but I hate sillystring! It’s that bright fluo coloured squirty plastic stuff in aerosols that kids just love. They squirt it in your hair, in your face and all over the floats to such an extent that by the end of the two weeks you can barely see the original characters. And don’t get me going on the environmental impact it must have….Confetti is fine, it’s traditional (first used in 1892) and biodegradable, produced from waste paper which is from a sustainable source in the first place. And it doesn’t ruin the floats. So here’s another tip, try and go to carnival nearer the beginning of the two weeks than the end if you can so that you get a good view of the amazing creations unruined by kilos of plastic yuck! 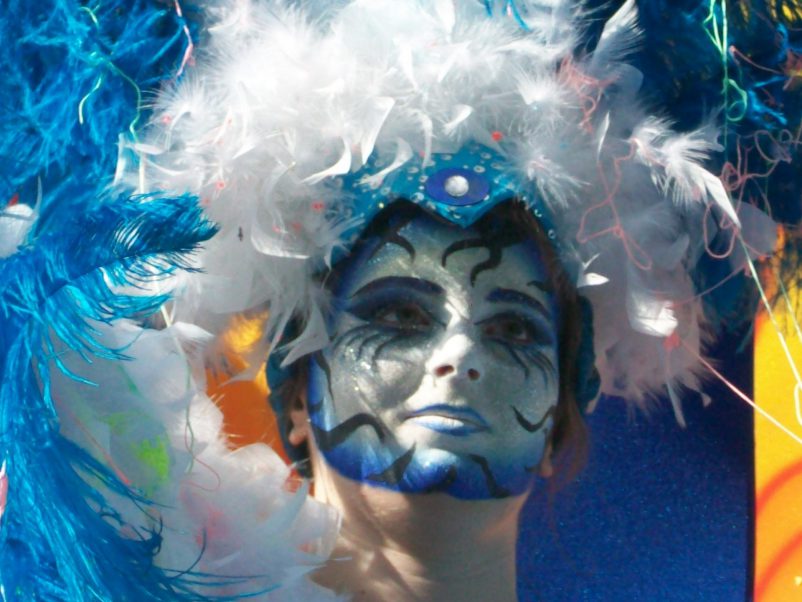 Carnival starts with the arrival of the King on the Friday night and the first weekend includes sporting and charitable events. There’s a 16 km Fun Run along the Promenade des Anglais and a crazy sea swim “le Bain du Carnaval”. The swim is free to enter and for every participant the organisers donate a sum of money to the local children’s hospital. Wetsuits are allowed and fancy dress is encouraged! The festivities end, 17 days later, with the ritual burning of the King out at sea in the Baie des Anges accompanied by music and a truly spectacular firework display. It’s a dramatic, even moving, moment and a couple of years ago number one son was nearly in tears. He wouldn’t like to admit it now, being a teenager, but he was, trust me!  The ending aside (which is great, no matter how sad!) Nice Carnival is a joyous time, full of colour, music, smiles, noise and fun.  It’s the perfect antidote to the winter blues. 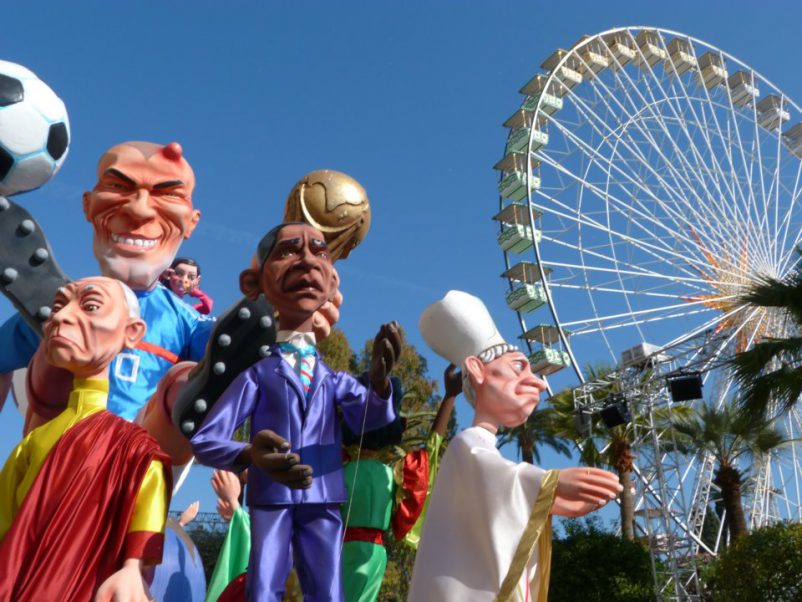 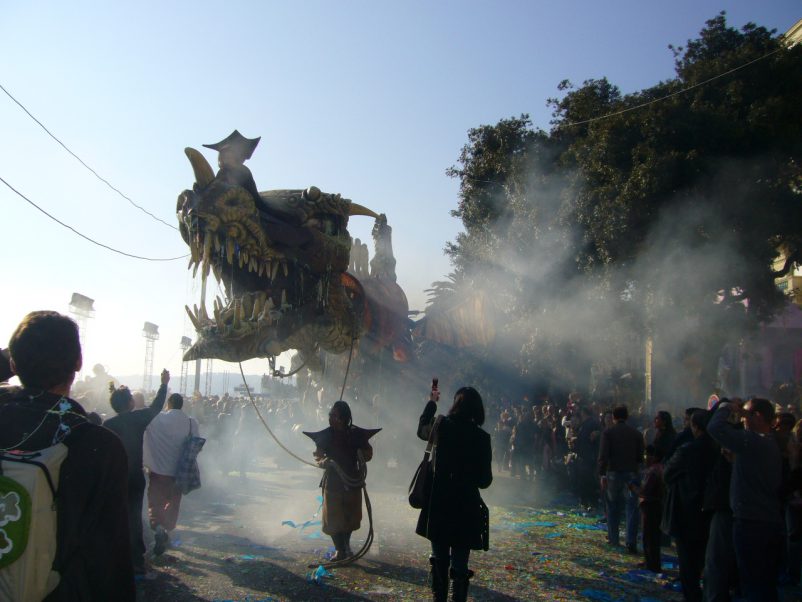 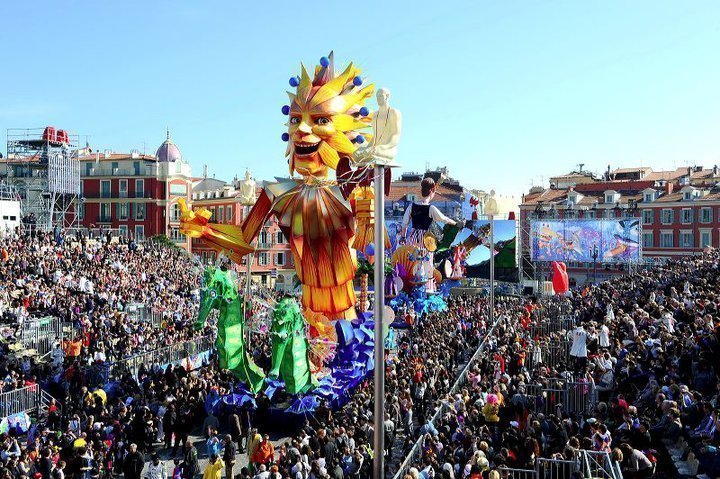 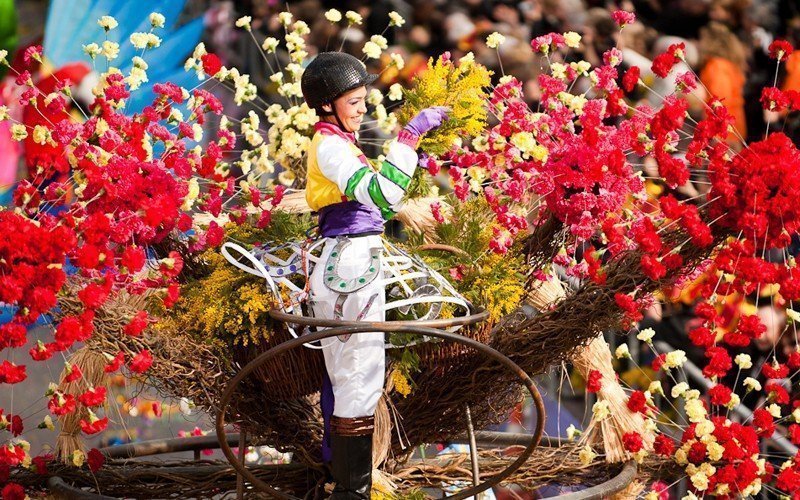 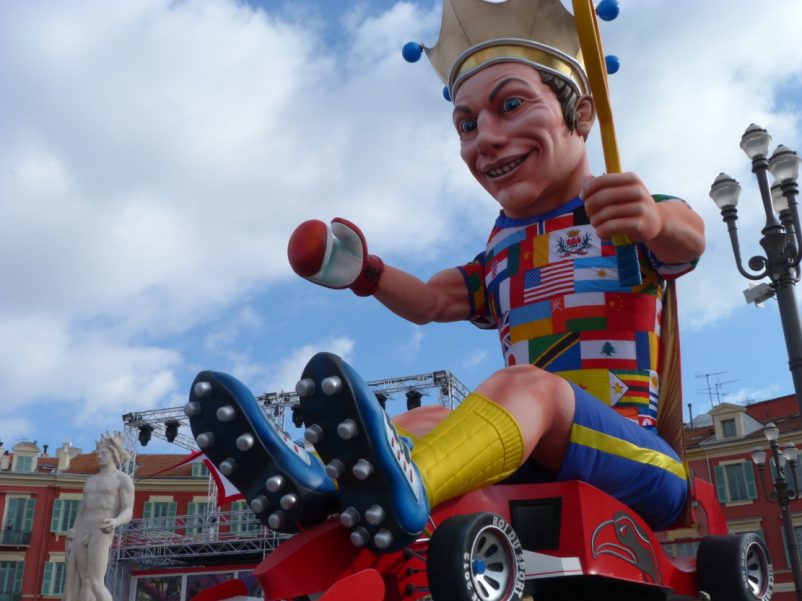 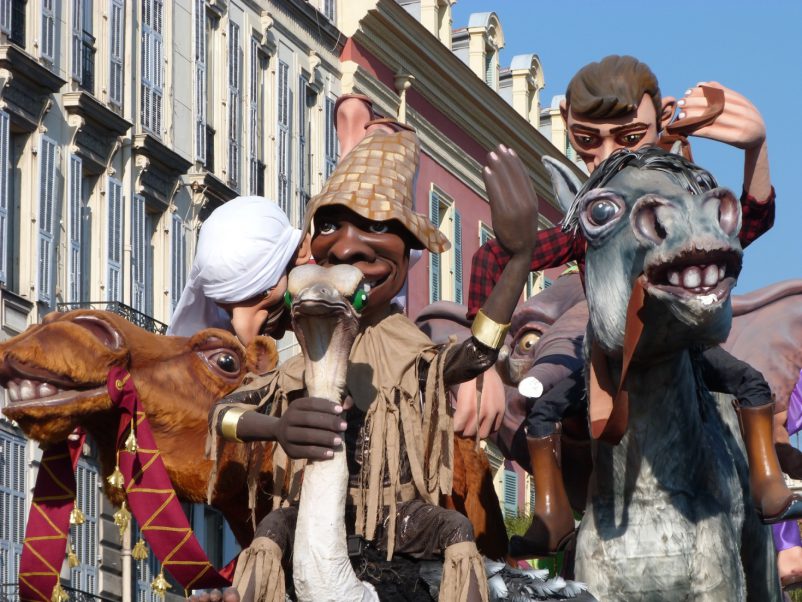 If you’d like to see more photos of Nice Carnival and the lemon festival in Menton which takes place at the same time just a few kilometres down the road click through to the other articles I’ve published:  Nice Carnival 2014 – a photo essay, Lemon Festival on the Côte d’Azur – Menton’s Fête du Citron and Battling with flowers and the meaning of Carnival in Nice.

Have you ever been to Carnival somewhere in the world?  Do tell! 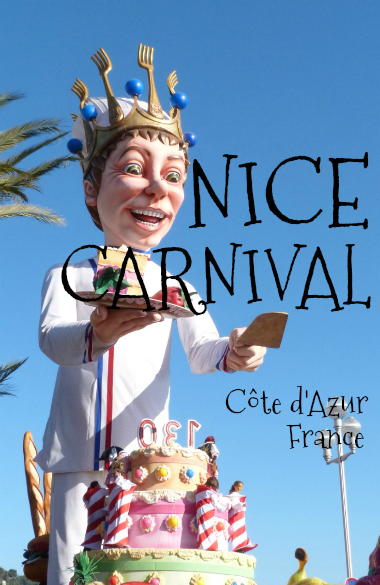 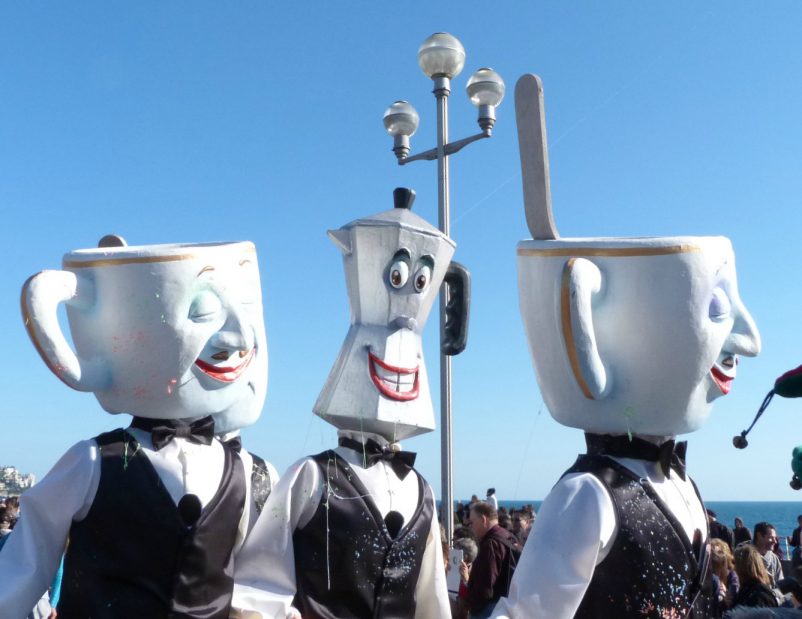