Last Saturday JF went for a walk and I went to bed.  I wasn’t sick nor was I having a daytime nap, it was bedtime and JF was setting off on a 53 km night walk through the mountains, with 1498 other people.

He was participating for the 3rd time in a local sporting (make that slightly crazy sporting) event.  Les Allumés de la pleine lune takes place every year on a weekend nearest to the full moon in May or June.  The name is a play on words as “allumé” means both crazy or fanatical person and lit up.  “Pleine lune” is full moon.  So basically it means the FULL MOON NUTTERS (in a nutshell!)  This suits JF as anyone who knows him would agree that “nutter” describes him well.  And anyone who chooses to walk 50+ km throughout the night is definitely a nutter in my opinion.

Les Allumés de la pleine lune is a not-for-profit association set up by a group of high school friends in 1998, just for fun.  A very small percentage of the very small enrolment fee goes to a local charity but it is not billed as a charity event, just a challenge.  JF simply sees it as a personal challenge whereas I see it as a fundraising opportunity. Having been brought up in a culture of sponsored “just-about-anythings” from toddles, to channel swims via moustache growing and bed racing, I felt JF’s hard work should benefit a worthy organisation.  By fundraising I felt I could be involved too, without having to do the hard work! So last time he did it I turned it into a sponsored walk and he raised £1250 for MSF.  However, my job as fundraiser was an eye opener as to French attitudes to charity donations and sponsorship in particular.  The sponsored “just-about-anythings” don’t happen here and my French friends and family-in-law just didn’t get it.  In England no one bats an eyelid if asked to sponsor a child’s cake bake, village bed race or manager’s haircut.  Events like Red Nose Day have become part of the calendar but charitable giving is very different in France.  For a start it’s private, it’s often an annual donation to a favourite charity (for which you can claim tax relief) and it’s rarely personal, humorous or self-deprecating.  I discovered this the hard way, badgering people for money wasn’t appreciated at all and I very nearly fell out with the in-laws over it; who’d have thought, I was just asking for sponsorship….This year I let JF get on with his challenge on his own though I won’t say I’ll never try again.  In the fifteen years I’ve been in France I’ve only been asked to sponsor someone twice; my son, who goes to an international school. 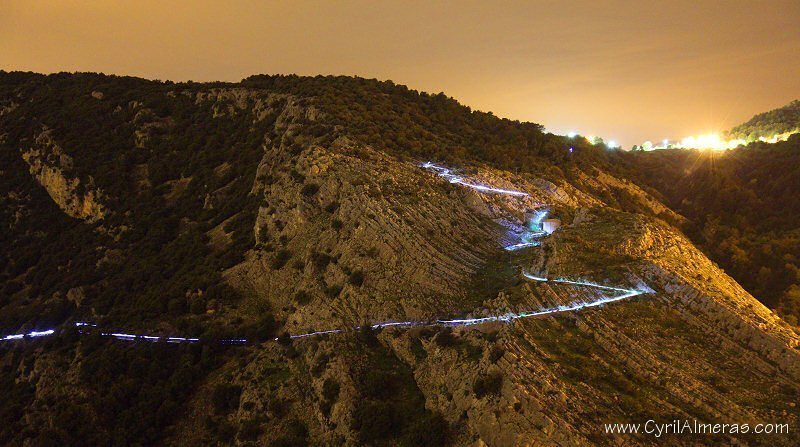 But I digress.  Let’s get back to The Walk.  This year it was 53 km and very steep with a vertical gain/loss of 1334m.  Starting at 10 pm it follows hiking trails and sheep paths (yes that’s meant to say sheep not steep though they’re that too) in the mountains north of Grasse.  There are several pit-stops/security checks with shuttle buses back to the start if you can’t go on, but basically you’re in the wild, in the dark.  The full moon shines light as long as there isn’t thick cloud cover (2012) or rain (2010).  The circuit starts in the picturesque village of St Cezaire, passing St Vallier de Thiey and Mons before returning to St Cezaire; all of which can be visited during daylight hours too!  By all accounts it’s a very scenic route following the Siagne river much of the way.  JF finished a very respectable 193rd in broad daylight, drove home, uttered the famous last words “never again” and went to bed for the rest of the day.

Lou Messugo is surrounded by fabulous walking/hiking country, from easy coastal paths to challenging mountain hikes.  There’s something for everyone and every level of fitness.  And you can even walk during the day!

A walking tour of Monaco in pink

Thanks to Cyril Almeras for the beautiful photo, taken of the walkers in pitch darkness (no moon) with a very long exposure.