Monaco is one of those places everybody’s heard of; its reputation precedes it.  It reeks wealth, glamour and fast cars. It’s the only place I’ve come across that advertises its distance as “15 minutes by helicopter” from an international airport rather than the train/bus timing.  It’s the only place I’ve been to where public toilets are like 5 star hotel bathrooms (well, minus the fluffy towels and cosmetic freebies, but in terms of cleanliness and decor) and it’s the only place I know where you can traverse the majority of the country through sparkly clean tunnels, travelators, escalators, elevators and walkways.  It’s also where I recently went on a walking tour of Monaco, in pink!

But then there are a great deal of superlatives for Monaco.  It’s the most densely populated country in the world, with the longest life expectancy too (at nearly 90 years).  It has the highest GDP in the world and the lowest unemployment globally.  It also has the lowest poverty rate and highest number of millionaires and billionaires per capita.  And not surprisingly it has the most expensive real estate in the world.  But does all this make it a nice place? Let’s take a little walking tour to find out. 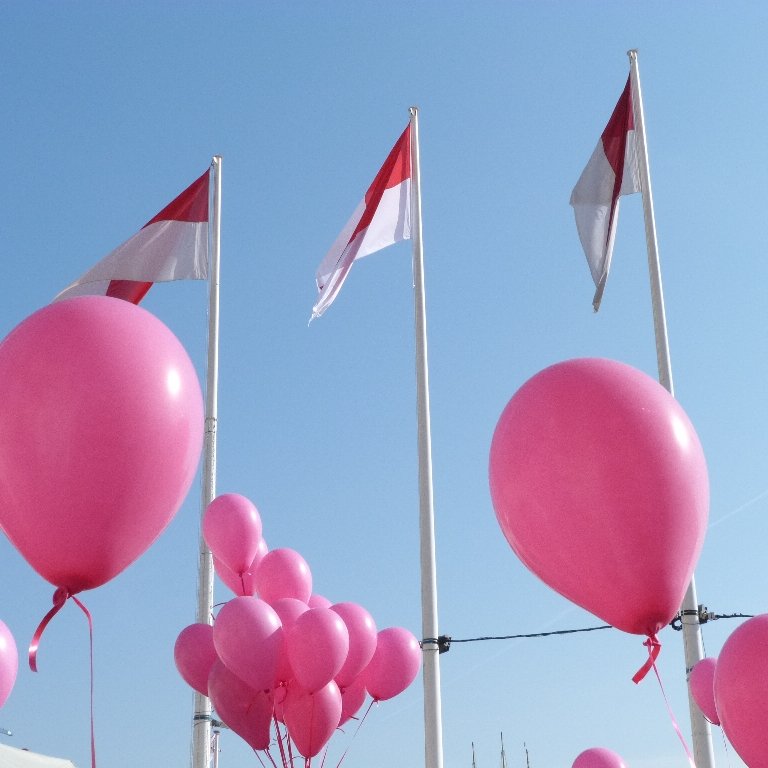 A walking tour with a twist.  Recently my family and I, along with 20 or so friends and a further 380-ish pinkly-dressed strangers, participated in the 3rd annual Pink Ribbon Monaco Walk.  We couldn’t have asked for a more beautiful day to wander through this enigmatic Principality.  Basking in the sunshine which actually produced heat despite the March date, Monaco looked its best and I’d defy anyone not to fall under its charm in these circumstances. 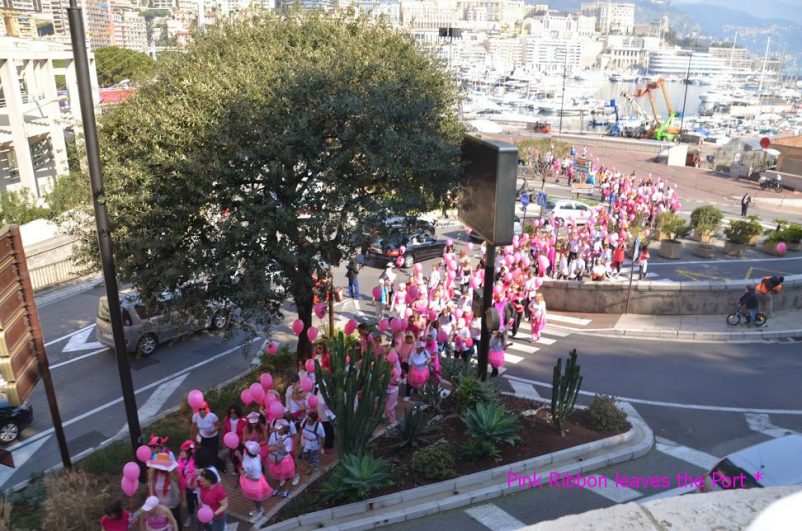 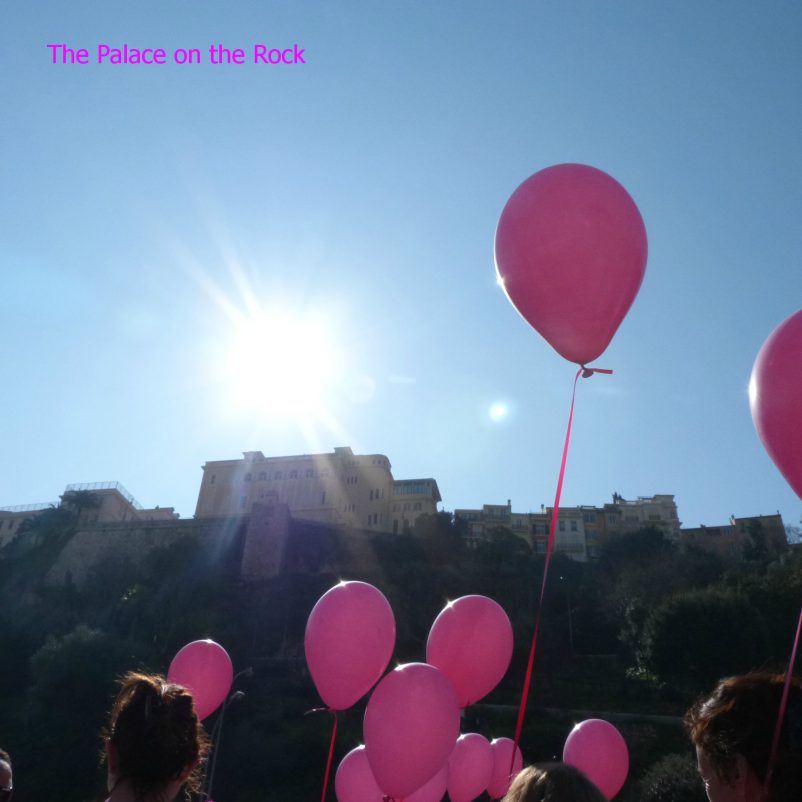 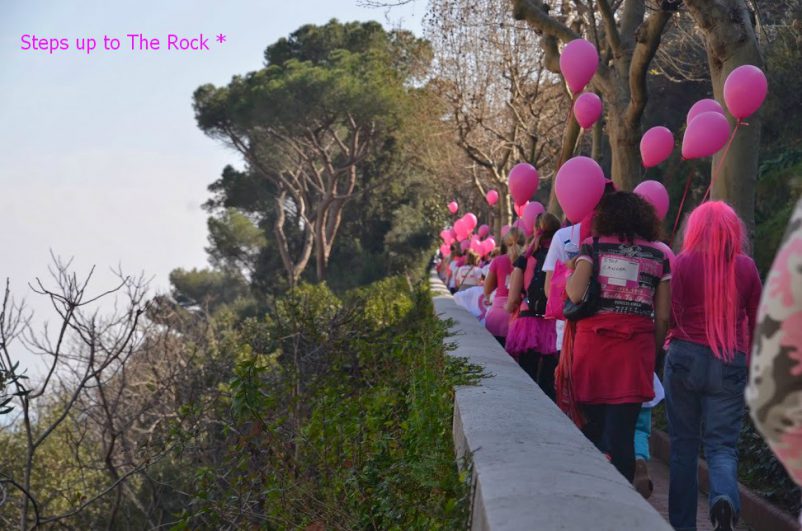 The walk started on the main port – Port Hercule – at the iconic start and finish line of the famous Monaco Grand Prix.  From there we wound our way up the hill, snaking along in one great pink ribbon, on to “The Rock”.  This is the historical old part of Monaco where narrow medieval alleys, the Cathedral and Royal Palace are located.  It’s the area with the most charm, though its perfectly renovated buildings, squeaky clean streets and (far too) many souvenir shops leave it a litle soul-less compared with many of the other medieval towns on the Riviera.  So having come up Avenue de la Porte-Neuve, we passed in front of the magnificent Oceanographic Museum (possibly the best thing about Monaco) and into the lovely Jardins St Martin. This park, planted with Mediterranean and tropical species, and plenty of exotic cacti, is gloriously lovely, with its views out to the sea, up to the Cathedral and over the Fontvieille port.  We walked through the middle this time but if you pop over to the Pointe St Martin on the sea side you get the most wonderful view of the museum, and along the coast eastwards taking in three countries at once: Monaco, France and Italy.  At the end of the park you come to Ruelle Sainte Barbe, lined on the right by beautiful old colourful houses (with squillion dollar views!). 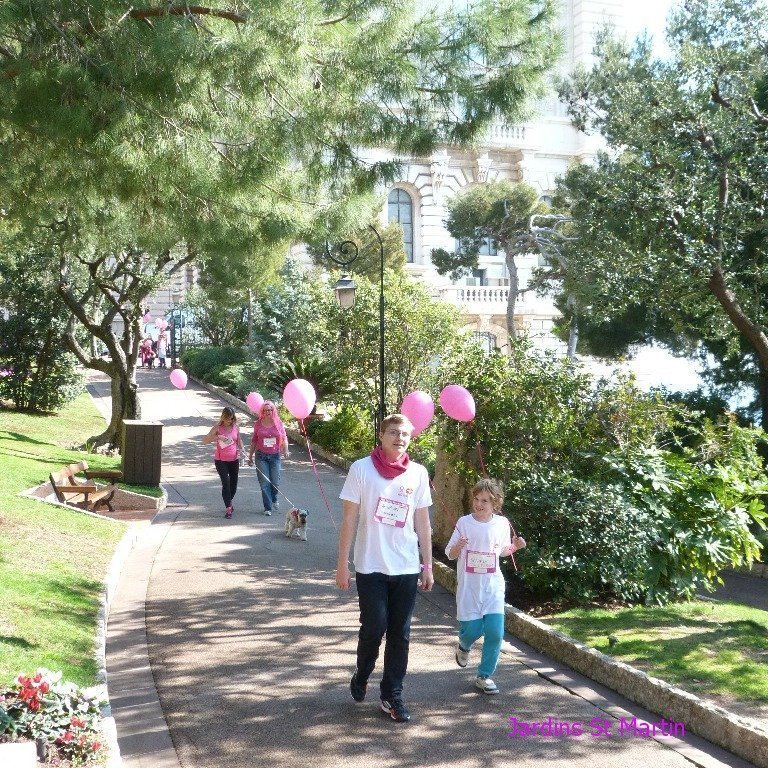 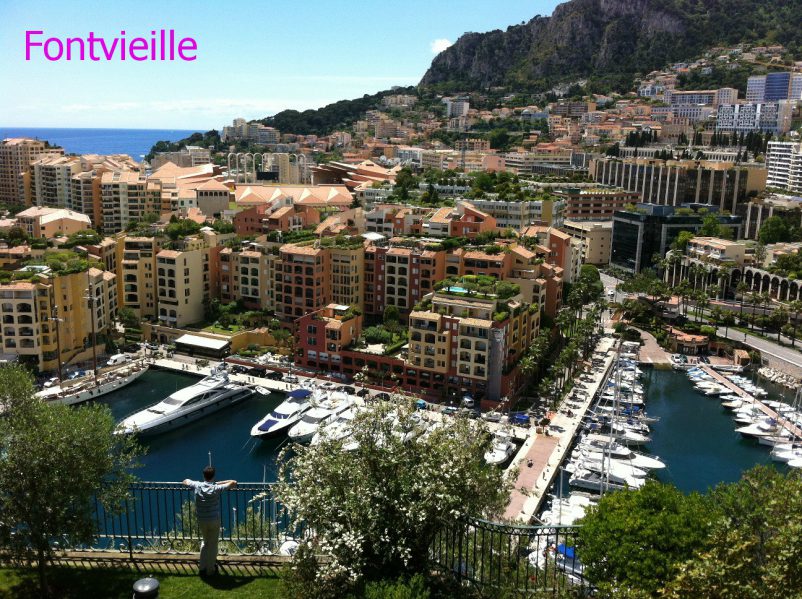 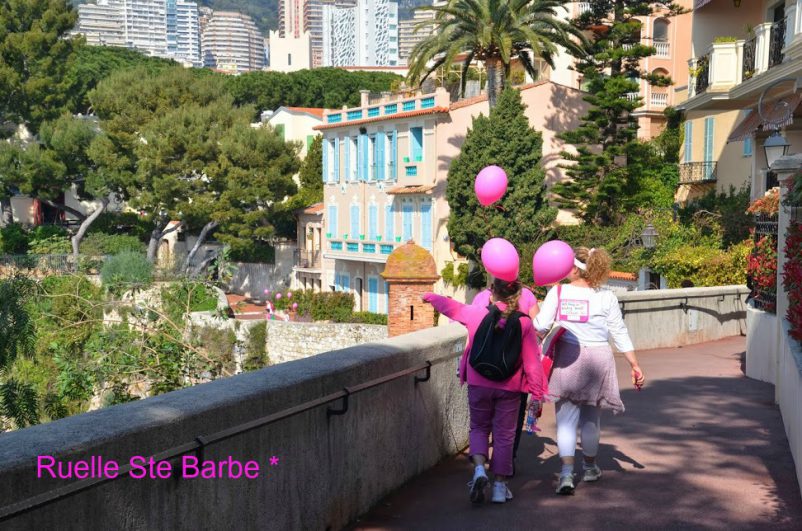 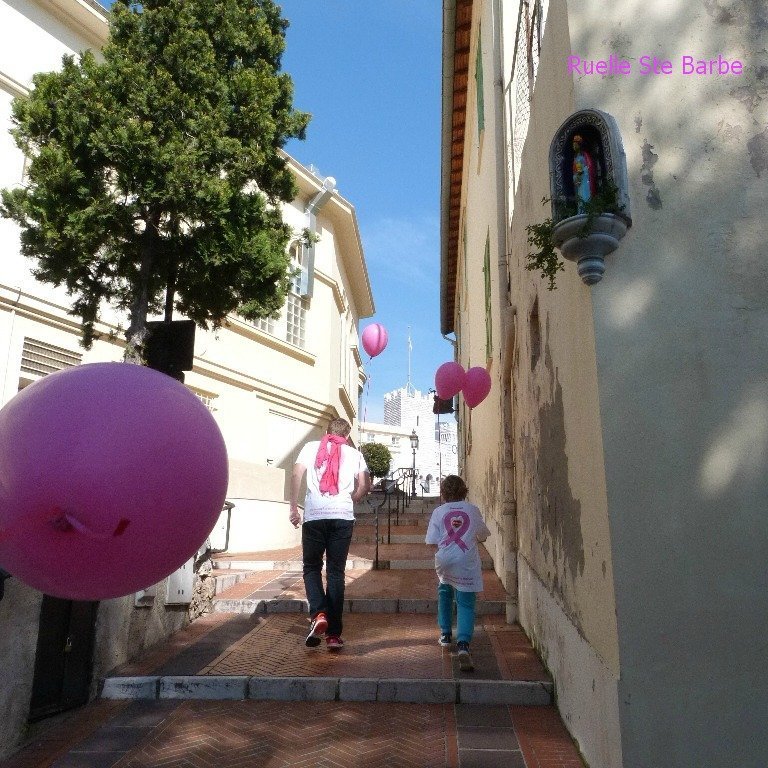 Next up on our little walk was the Place du Palais, the Palace Square, for a group photo.  The Palace is the home of Prince Albert II, constitutional Monarch and Head of State, and tours are possible. (This brings us to another superlative as regards Monaco, that it has the longest reigning monarchy in the world – the House of Grimaldi have ruled, with brief interuptions, since 1297.)  Once the press photo was taken we were off again, down the steps known as the Rampe Major offering great views across Port Hercule and the highrise towers that surround the harbour. 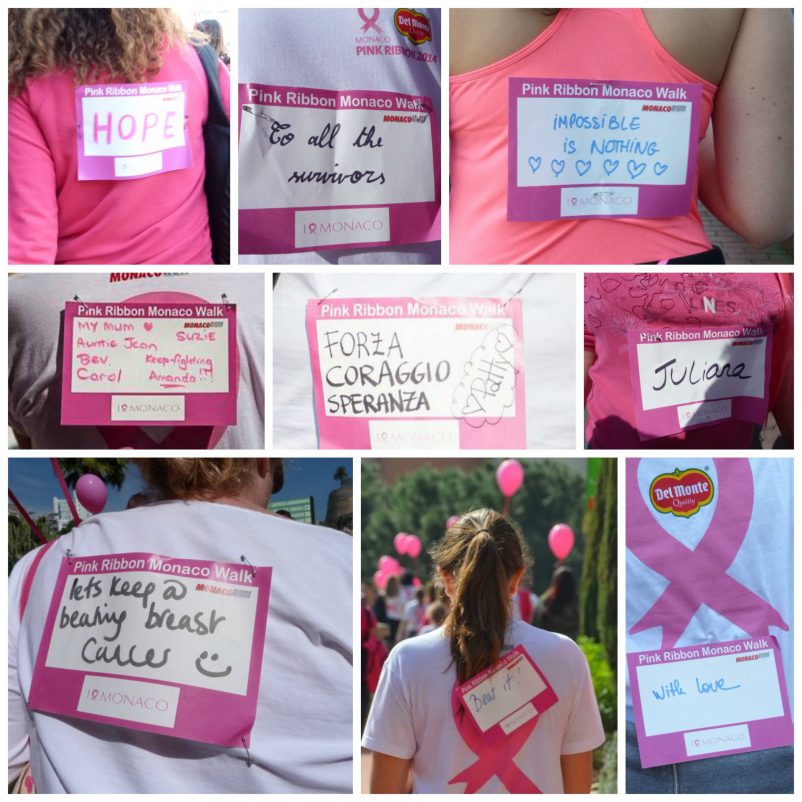 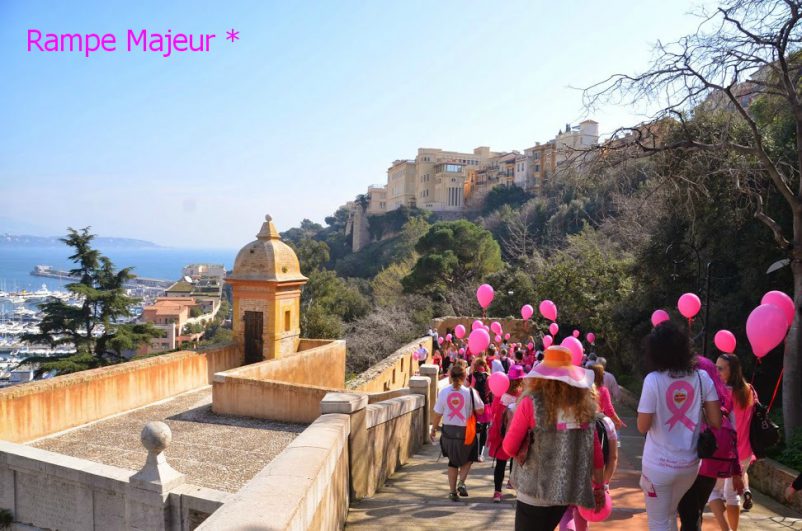 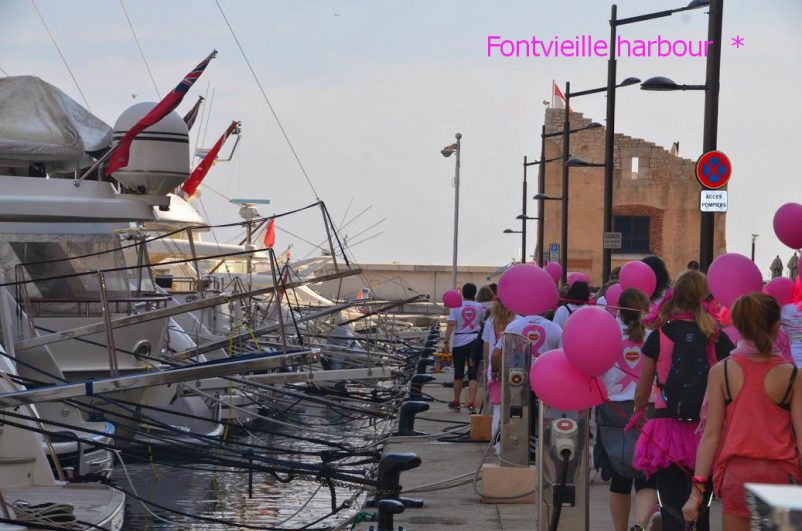 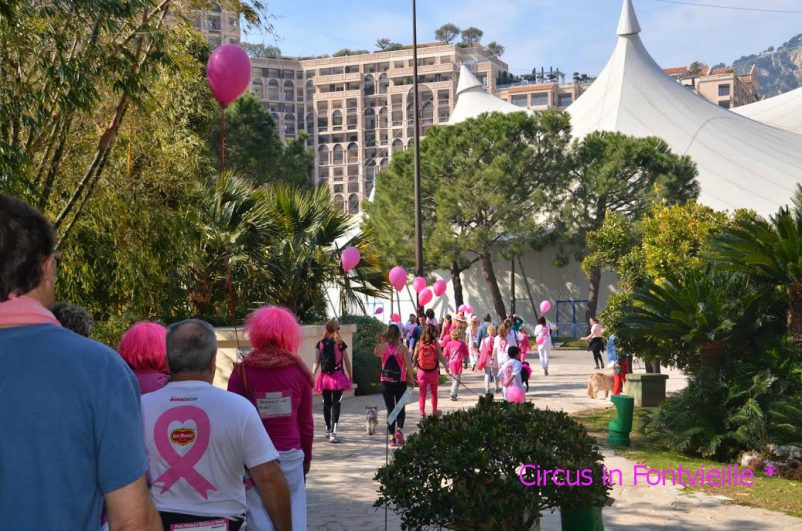 We circumvented the Place d’Armes and headed into Fontvieille.  This part of Monaco is constructed on reclaimed land; it contains some of the slightly cheaper housing, the second port, the all-important heliport, the “normal” shops, the permanent circus bigtop (home to the International Circus Festival of Monte-Carlo held annually in January) and the stadium.  It also has some charming parks, including the Princess Grace Rose Garden, which even in March were full of flowers in bloom. For anyone interested in sculpture there are plenty of unusual and striking pieces dotted through the gardens. So we walked along the edge of the port, following Quai Jean-Charles Rey, as far as the Heliport. There we turned right to pass the circus and cross the attractive green parks before taking an escalator back up to Place du Canton.  Retracing our steps we found ourselves back in Place d’Armes where under stripey red and yellow awnings local Monagesques were going about their Sunday shopping in a charming little street market.  It was a side of Monaco I hadn’t seen before, authentic and a far cry from the glitzy, designer boutiques most commonly seen here. 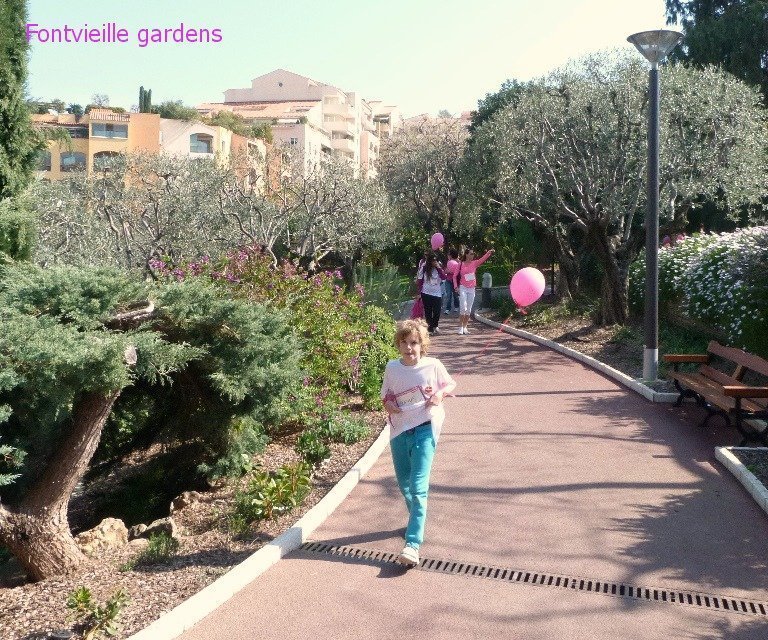 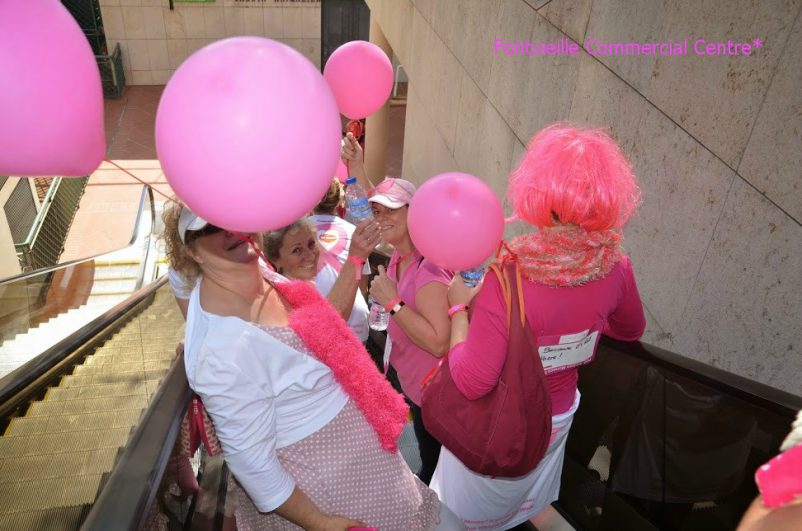 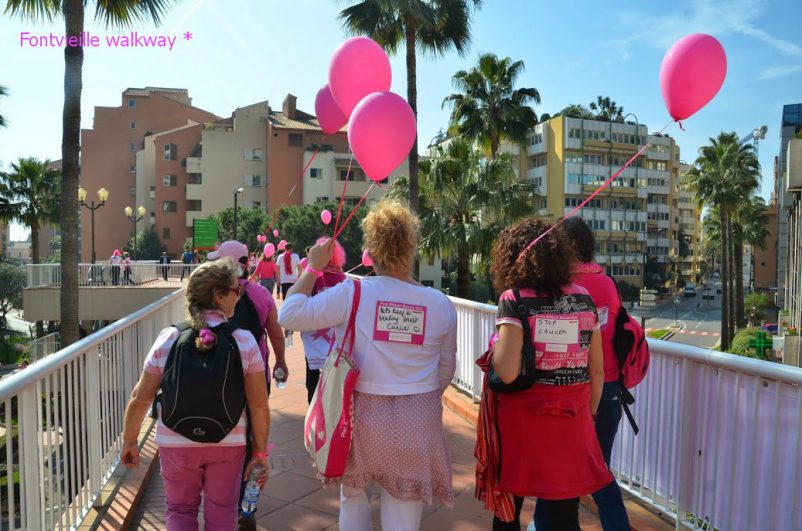 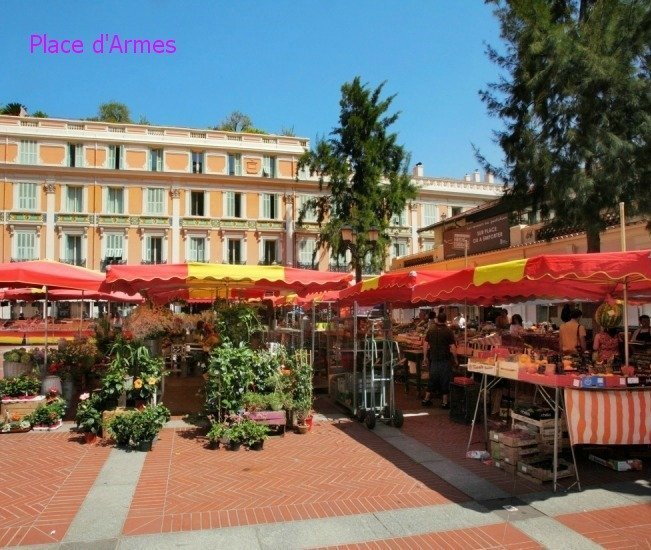 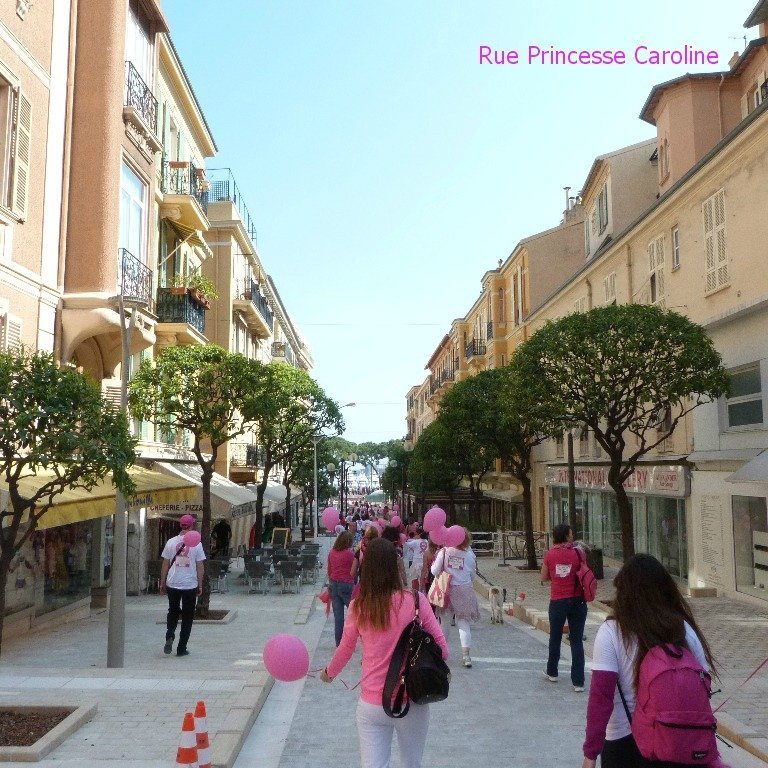 The final bit of the walk took us from the Place d’Armes into the area known as La Condamine, down a fairly ordinary pedestrian street, rue Princesse Caroline, and back out onto the port where we started.  All up it took us just over an hour and a half, walking at regular pace, not fast, not slow, with only the one stop outside the Palace.  It’s an easy walk for all levels of fitness though owing to the number of steps it wouldn’t be easy with a child’s buggy, nor possible in a wheelchair.  But what it was perfect for, as well as sightseeing, was creating awareness and raising money for breast cancer sufferers. 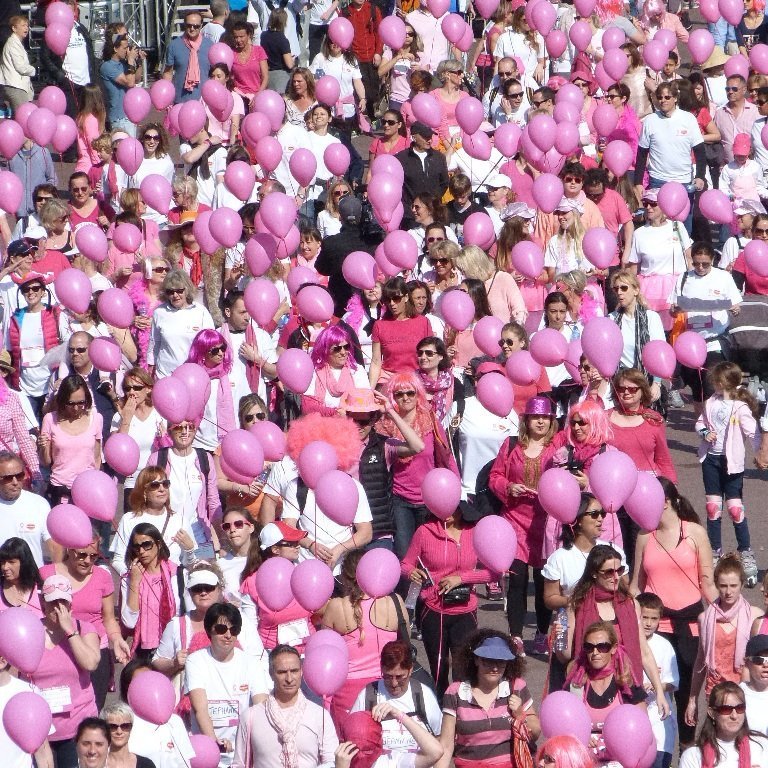 Pink Ribbon Monaco is affiliated to the worldwide movement but all funds raised go towards local projects. This walk was only the 3rd and it has grown in numbers year on year.  It was a great event, in a perfect setting, blessed with the best weather ever!  I found the atmosphere incredible – emotionally charged, hugely supportive – as everyone there had a story to tell.  Instead of numbers our bibs were left blank to write a personal message dedicated to a loved one fighting or lost to cancer.  I walked with two survivors, both young mums, and reflected on two friends lost recently to the dreadful disease.  I hope this walk continues to grow and urge anyone reading locally to get involved next year.  (You can read the inspiring story of my friend’s fight against cancer in her recently published book “Breathing Out“.)

So back to my original question.  Is Monaco a “nice” place?  I think the answer is a resounding “yes”. “Nice” sums it up well.  It’s so perfectly clean, efficient and well looked after, with lovely green spaces amongst its densely built-up streets, and extraordinary views, that despite any misgivings about its phenomenal wealth and lack of “soul” it’s a good place to visit.

I’ll leave you with some more images from the day. 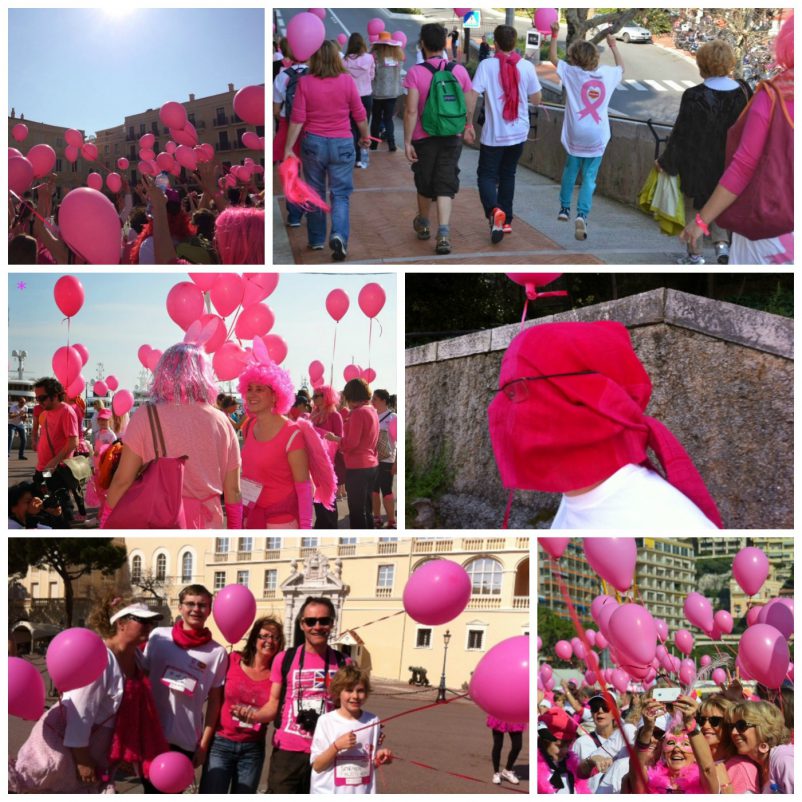 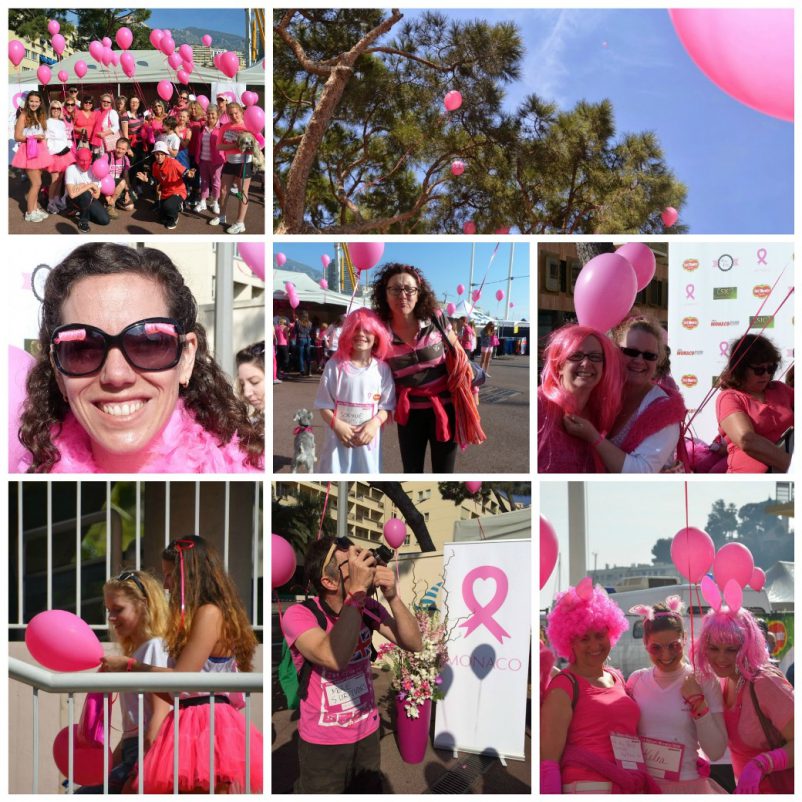 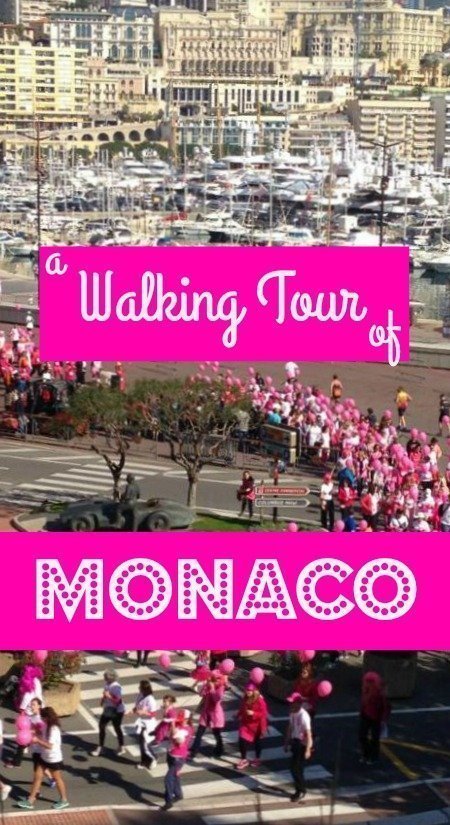 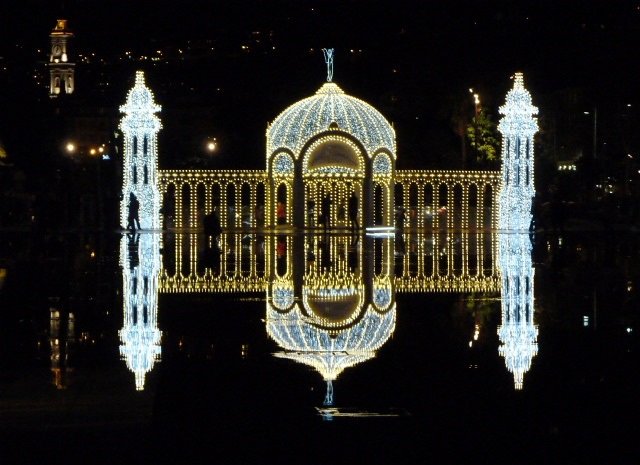 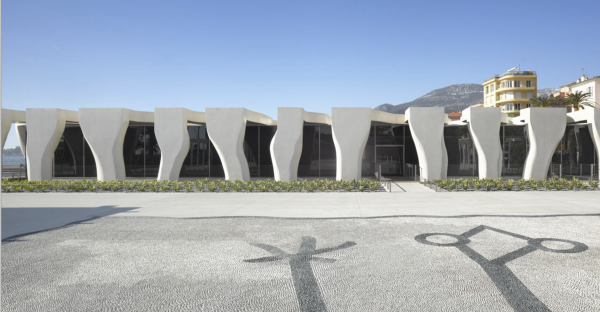