St Martin – The Franco-Dutch Island in The Caribbean

For the fifth post in my series on far-flung France we are off to the Caribbean again, to the island of St Martin. My guest writer today is Susan Hays, a globe-trotting Brit now settled in South-West France having lived all over the world.  Here she tells us about living on the French side of the unusual island of St Martin, a DOM-TOM until 2007, now collectivité d’outre-mer.

Guest post by Susan Hays at Our French Oasis

Writing this on my terrace in the Charente Maritime, the Caribbean seems very far away and a long time ago, but my affection for sun, sea and palm trees has never really diminished, and with good reason. For once – sixteen years ago, we spent a great deal of time in a part of France that had not only all of that, but also a very multi-cultural population, an afro-caribbean vibe that shimmied throughout a mountainous but small island, and which had a shared border without guards that enabled the curious to stand with one foot in France, and one foot in Holland…. 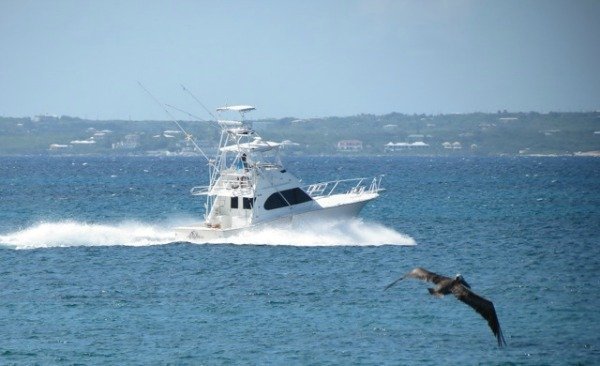 St Martin, one of the northernmost of the Antilles, is a medium-size 34sq mile volcanic remnant that sits a mere 20 minutes by normally choppy boat-ride from Anguilla, and a 40 minute ride from St Barts to the south-east, the well known playground of the rich and famous. Back then, I spent two years of my life running between St Martin and Anguilla, keeping an eye on the shoreside interests of our sport-fishing charter business. We had our first-born in tow, a frizzle-haired 2 year-old girl, who caused much amusement with her out-of-sync but natural blonde dread-locks. Her piping English tones were standard fare for the Anguillans, but on St Martin her blondness stereotyped her as a Dutch child, out for a jaunt to the foreign side of the island. 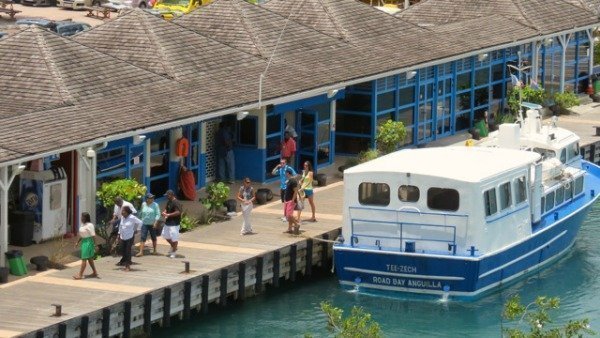 St Martin is that rare find in the Caribbean, if not the world. It is a piece of steeply undulating island, evenly divided by a non-apparent border at which no border-controls exist, and where without a passport one can spend a day divided between a counter of ripe French Brie and a coffee-shop serving fine Dutch pastries. A weekend of shopping can be divided between the capital of the French side, Marigot, and a stroll along the dock in St Philipsburg admiring the towering cruise-liners on a quick stop. A hire car could have both a Hermès bag on one seat, and a Dutch wicker-bag on another; one containing fine scarves and earrings, the other a collection of cheap Chinese cooking-ware. Marigot spends her days basking in the sun, keeping to traditional French hours incorporating le dejeuner and la sieste. Philipsburg, by contrast, is a 24/7 frenzy of shopping and eating, its streets and docks ablaze with energy by day and night as dutch-minded burghers of all creeds and race make as much of their days as they can. If you want a lazy day with class and a whiff of decaying elegance, you dine in Marigot. If you want the most value from your holiday, you breakfast on the Dutch side. 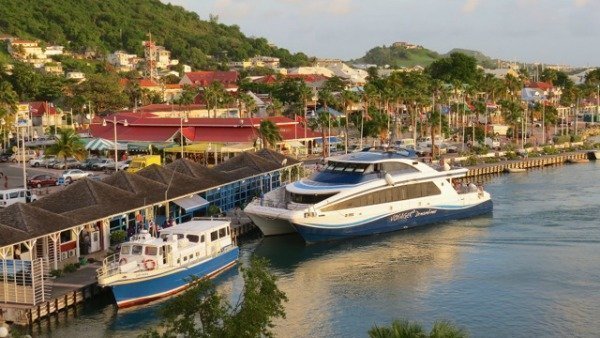 Marigot faces north, like France, towards the little piece of the UK that is Anguilla. By day a succession of ferries, nearly all Anguillan, plow back and forth carrying passengers and goods between the two islands. Here there are definitive borders, and people with truncheons on the north side, and guns on the south. Customs and police keep a wary eye on business, and if you are carrying shopping on the return to Anguilla, you have to declare what you have bought and pay duty where appropriate. It somewhat stifles the enjoyment of the breeze and the thud of flying fish into the hullsides. By contrast, a journey in a southerly direction entails no more than a jump ashore, a step or two through a tin-hatted terminal and then out into the plaza for a taxi, mini-bus or a short walk into the luxuries of a tiny transplanted Paris. Fine meats, brandies, diamonds, silks and those smelly cheeses all await. 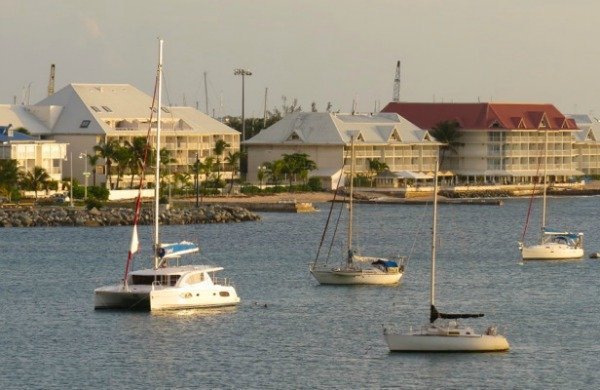 To anyone who lives or spends a good deal of time on the French side, it is a world apart from the Dutch version of events. Marigot is a subtle time-waster of a day, with opportunities at every turn to either open your wallet. Squeaky French contemporary design exists inside buildings and at junctions of note, while the old colonial buildings still elicit an atmosphere of decaying power and provincial triumph, despite the peeling paint and potholes in the pavements. Menus, shop signs, road markings and le tabac are all very French, and a swift lunch can easily turn into a 2-hour gourmet dawdle, spent idly watching other people eat moules frites under nodding palms and a lazy Caribbean sun. It is not a place to ‘get things done’, as the order of affairs is very much a mix of Gallic indifference and typical island laissez-faire. Things go slightly more to order and with some gusto on the Dutch side and it seems an inevitable way of life that more money seems to be earnt, and more done, on the south side of the lagoon. Commerce is the way of life in Philipsburg, while life in Marigot has an air of indulgence and casual style. 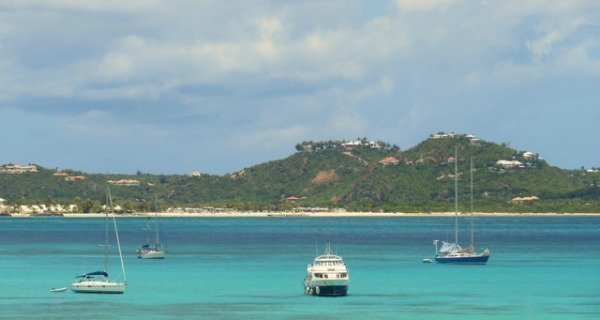 Marigot lies in a bowl of steep hills, with two or three roads leading out between the fingers of rough steep terrain. To the west lies the fleshpots of the Dutch side and its very American-influenced commerce, while to the east along the north shore lie a series of small villages and developments, squatting by the water’s edge. Here, out of the main confluence of Marigot’s multi-ethnic population, lies the real Caribbean – every way one looks there are not only the remnants of the old French plantations and all the remnants of construction which that sad industry once entailed, but there are also both poorly and well constructed new buildings, interspersed with typical shanty construction. There is a lot of countryside too, sparsely green and with much geological variation and interest. The east side of the island is slightly low-lying and there are other substantial settlements here – with lots of tourism. Small mini-vans dust past on rutted roads, crammed to the roofs with colourful bundles of shopping and islanders, and goats drift haphazardly across the hillsides, subsisting on a diet of earth and fired leaves. Amidst a church or two there are roadside bars, people cooking on grills made from gas bottles, tourists clicking cameras in open-topped Citroen Safaris, and a pervading smell of vegetation that spends its time dry and then wet – the underlying smell of any Caribbean island. 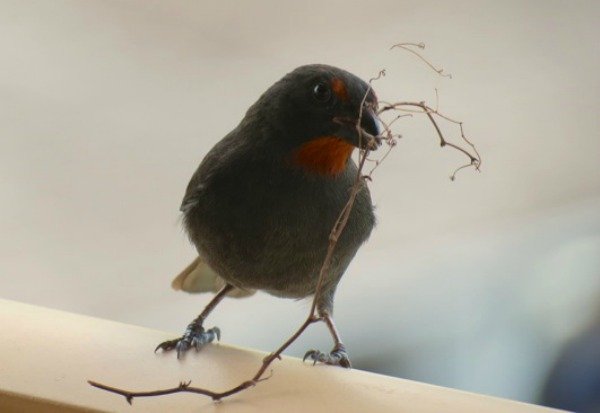 Running a business divided between the two islands was always a challenge, but for beaches and sun, rum bars and music, Anguilla was a must. For classic shopping and a whiff of Parisian style, Marigot was the go-to place. For anything we needed for the business and our boats, we would stealthily set sail for Philipsburg and pretend we had never been. It was a very interesting state of affairs for two years, our lives during hurricane season ruled by the emergency haul-out rhythms of a Dutch boatyard, and our hearts and souls captivated by the little piece of France that was Marigot. 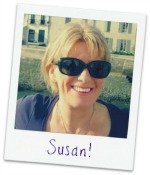 Susan has lived in many far-flung corners of the world along with her husband and 5 children.  She is now settled permanently in the Charente Maritime in South West France from where she writes her blog Our French Oasis. Her love affair with France started many years ago on the small French Island of St Martin in the Caribbean.  You can find Susan through her blog, on Facebook and Instagram.  All photos are provided by her.

If you enjoyed reading this you might like to read the other posts in the series on French DOM-TOMs about Martinique, Mayotte, Réunion, Guadeloupe, French Guyana, French Polynesia and Guadeloupe again.

Pin it for later! 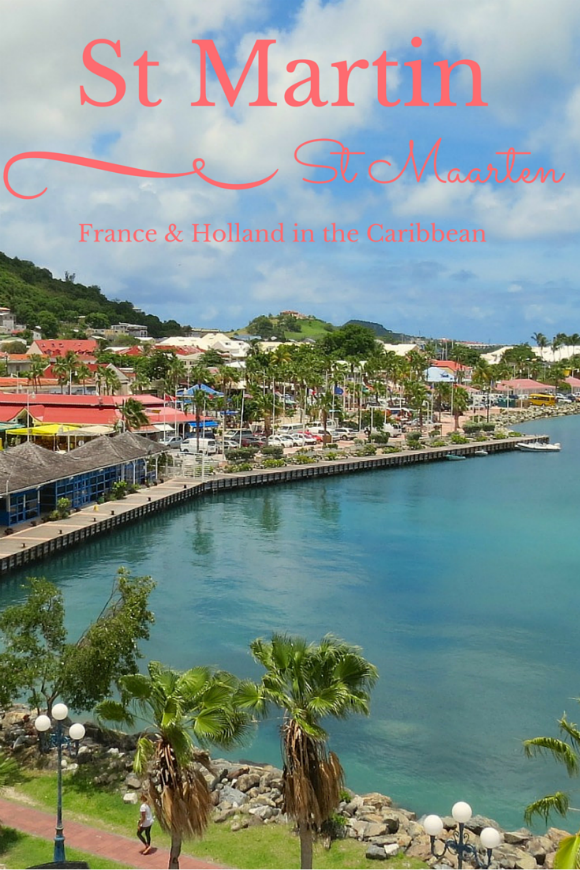