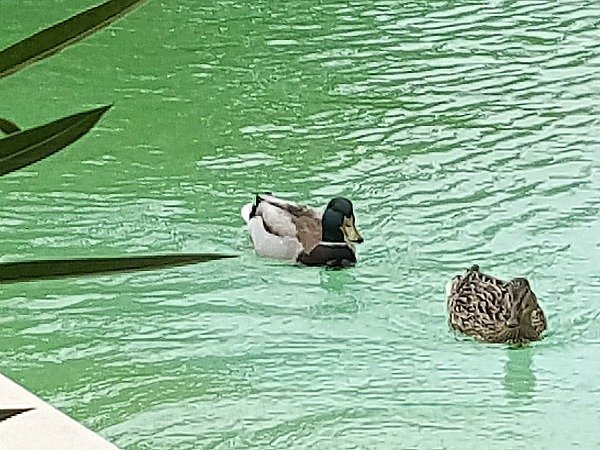 A few weeks ago we had some unusual visitors at Lou Messugo.  That in itself is not so strange, we’ve had a fair few unusual visitors over the years, both of the human kind and beast.  If you’ve been reading this blog for a while you’ll know we’ve had plenty of visits by wild boars and we’ve even had a deer in the garden.  Then there are the toads, frogs, lizards and geckos, not to mention the occasional snake, red squirrels and lots of foxes.  We get fireflies, bats and cicadas in summer and there are always plenty of birds in spring including woodpeckers and jays. I probably shouldn’t go into detail about the strange human guests we’ve hosted here in the gite as they can read….but I might just give you a little taster further on in this post. But getting back to the wildlife at Lou Messugo, this was yet another first for us: Mr and Mrs Mallard came to visit.

They arrived one morning as I was clearing away the breakfast mess.  There was a commotion in the lavender bushes and out walked a handsome male mallard duck, shortly followed by his rather less flashy female friend.  They had a good nosey around the garden and didn’t seem too put out when I approached them for photos. 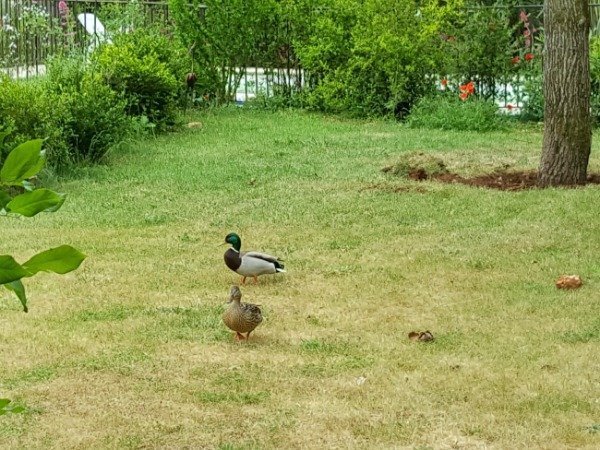 Before long they’d found the pool and dived in.  I suppose you can’t blame them for thinking it was a pond, it was green and rather natural-looking – we hadn’t yet prepared it for the summer season! 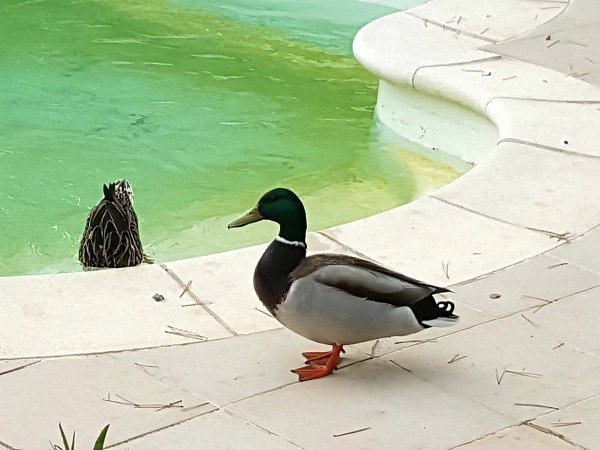 Over the next few days they flew in for a swim regularly and I soon discovered they were also taking advantage of our neighbour’s green pool.  But it turned out they didn’t seem to mind what colour the water was as I saw them on another neighbour’s blue pool a few times. 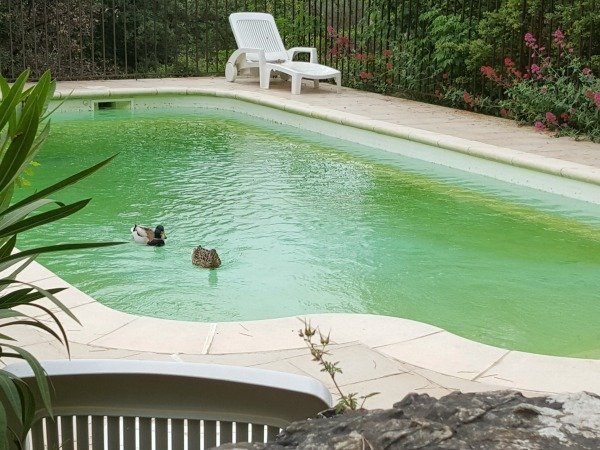 Finally Madame Colvert chose our immediate neighbour’s garden to make a nest and lay some eggs. 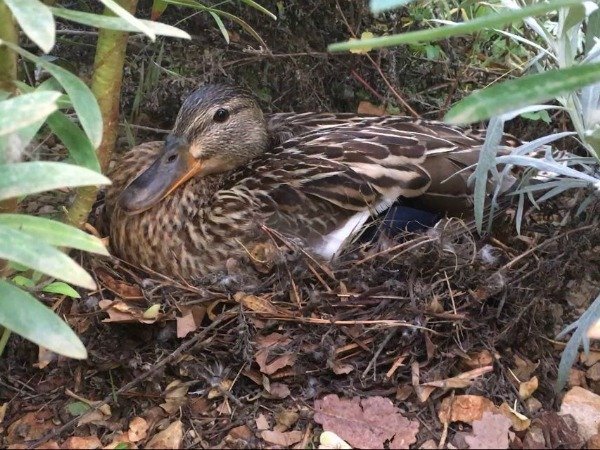 While she sat on them, Monsieur often popped over for a swim with us.  By this time we’d cleaned up the pool ready for human use and it no longer looked like a pond.  Finding duck poo on the tiles wasn’t particularly nice but it only happened once. 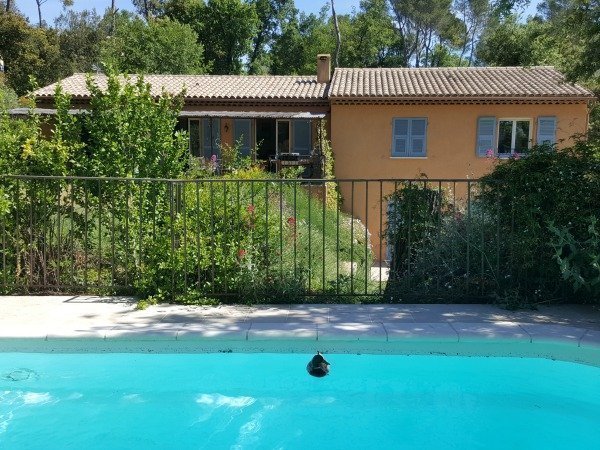 I’d been holding off writing about our almost tame ducks as I’d hoped for a happy ending involving ducklings.  The neighbours even built a proper pond for them, but this morning I got a text saying the nest was empty, no sign of Madame or eggs.  Knowing how many foxes there are here – we see them often when coming home at night – we have to assume she was eaten by one and actually I guess it’s quite amazing she lasted as long as she did. 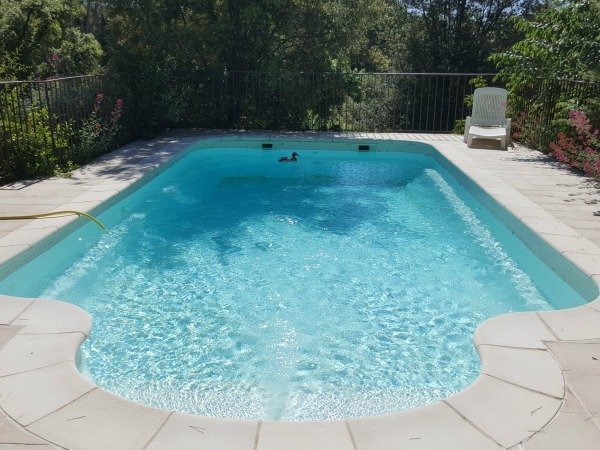 Sad story, no ducklings, that’s nature!  However, so as not to end on a downer, I promised some tidbits about some of our stranger guests. Over the years we’ve had one who brushed his long beard in the garden and then burnt the loose hairs in the barbecue every morning,  and a couple who shut the shutters and stayed inside all week without going out once (we got to the stage where we wondered if it was a suicide pact). We also had a family who left a metre wide red stain on the ceiling which we just couldn’t work out.  There have been many more, but telling would be indiscrete!

Do you have any wild animals in your garden?  I’d love to hear.

Wildlife at Lou Messugo, what a bore! 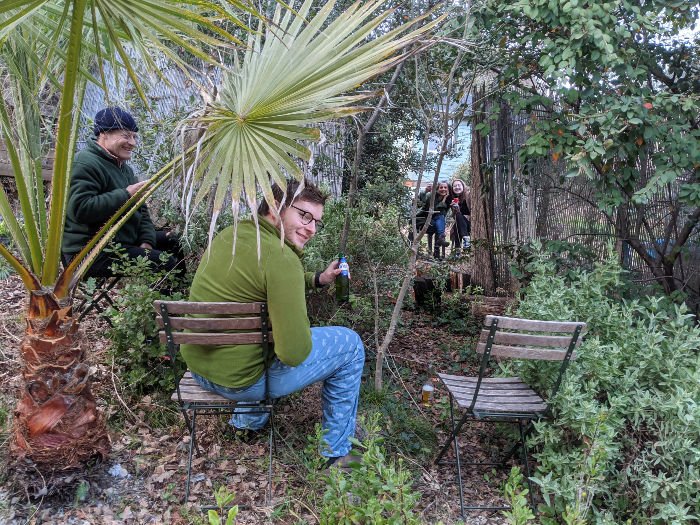 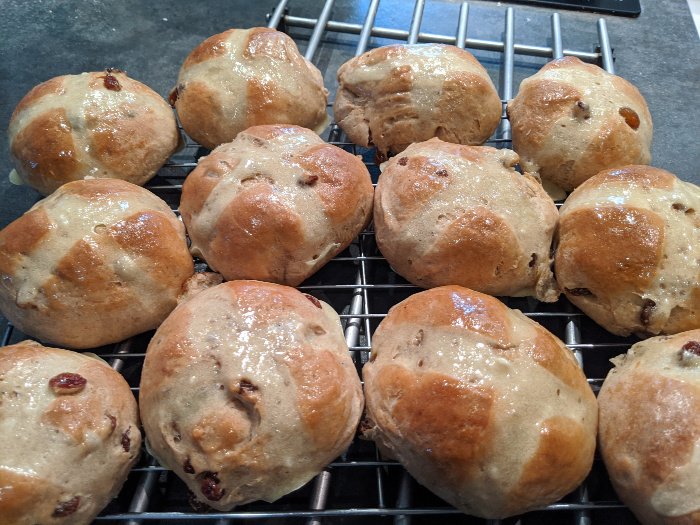