Nice has a new Promenade, nearly 160 years after the Promenade des Anglais on the seafront opened and became the place to be, there is now a lovely new park in which to stroll, play, relax and watch the world go by.  The Promenade du Paillon opened recently after two years of massive works that saw the destruction of the old bus terminal and ugly concrete carpark.  In their place there are now 12 hectares of green space, linking the National Theatre in the north with the Verdure Theatre on the seafront in a 1.2 km grass and water corridor.

The Promenade du Paillon is named after the river Paillon that used to flow underneath the new park. Judging from the historical displays along the paths (see photo below of the shadow of a couple looking at a black and white image) it was a considerable river with bridges and quays like most other large cities in France.  Why it was covered over I don’t know and could be the subject for another post, but for now I can say resoundingly that this park full of water features and play areas for children is 100% better than the old concrete monstrosities that used to divide the old and new towns. 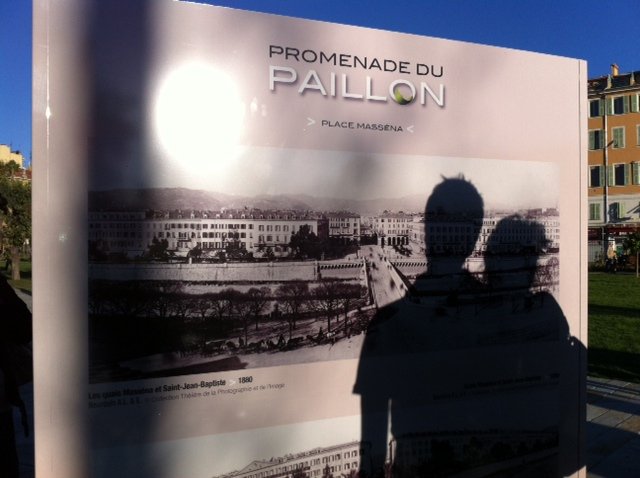 The park makes the most of its beautiful setting, using water “mirrors” to reflect the hills and colourful architecture. These mirrors contain 128 super hi-tech jets which squirt water up to 5 metres into the air, playing tricks on the crowd to the squeals of delighted children.  Another feature is the use of sprays gently recalling the early morning mist in the river valleys surrounding Nice.  I can imagine just how wonderful these are going to feel on hot summer days. 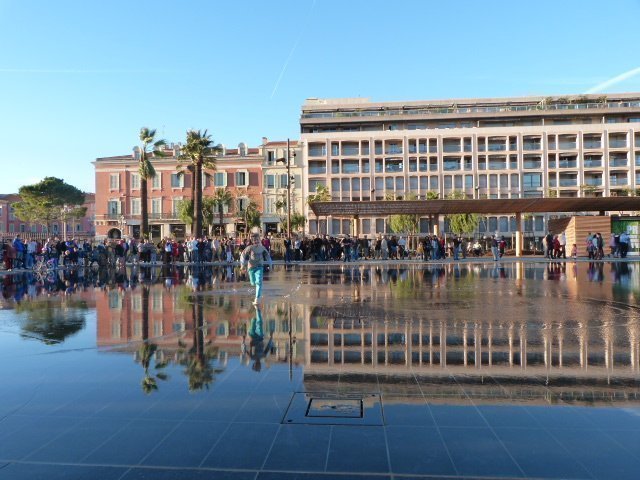 Elsewhere in the park is an original and very popular children’s’ play area.  Giant squids, turtles, dolphins and an enormous whale house swings and climbing frames made out of beautifully crafted wood.  This is a very welcome addition to central Nice as until now there was no playpark for kids in the vicinity. 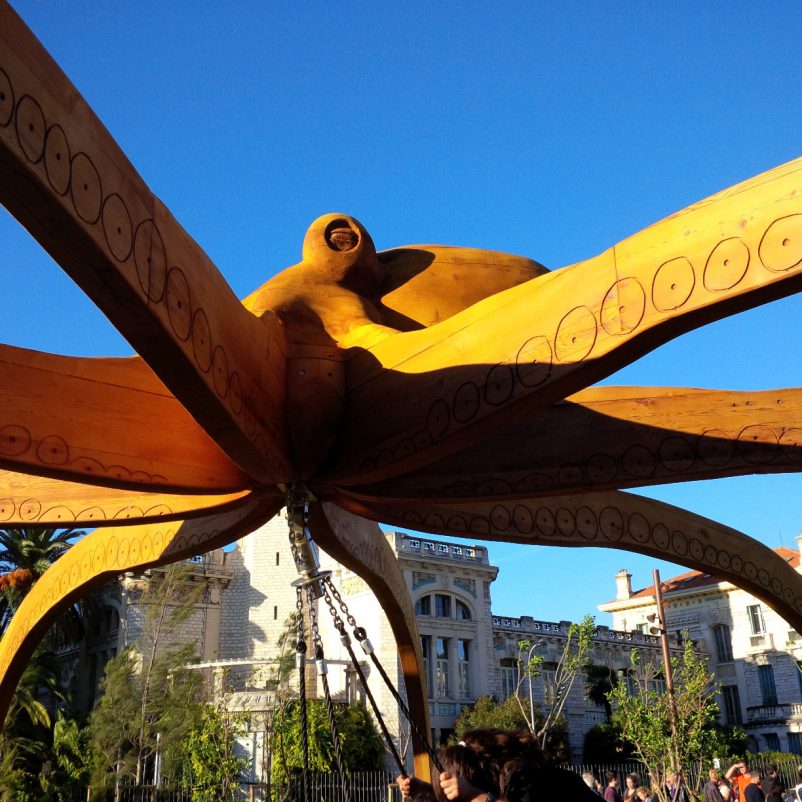 Each different area of the “coulée verte” (green corridor, its alternative name) is connected by wide open lawns which look lovely, particularly at the moment as the grass is in its tender bright green first stage, but herein lies my only criticism – you are not allowed to sit on the grass!  You can walk on it, which is already a step in the right direction (pun fully intended) compared to many parks in France, but to not be able to sit on it seems ludicrous. I’m hoping this is only a temporary* thing while the grass is young and delicate and within a few months we’ll be able to lounge around like folk do in other great cities with green spaces. Imagine London or New York with no one on the grass! Absurd!* 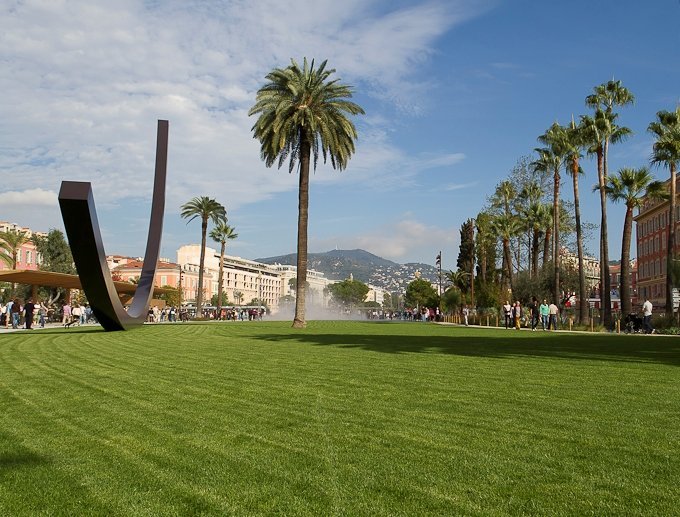 The length of the Promenade is planted with thousands of plants and trees from all over the world, with an emphasis on Mediterranean species.  I’ve heard that there’s a “forest of jacarandas” somewhere – my favourite tree!  I didn’t spot it this time but I can’t wait till spring to see its haze of purple flowers. Jacarandas always remind me of Sydney; a place that holds a very sizeable piece of my heart. 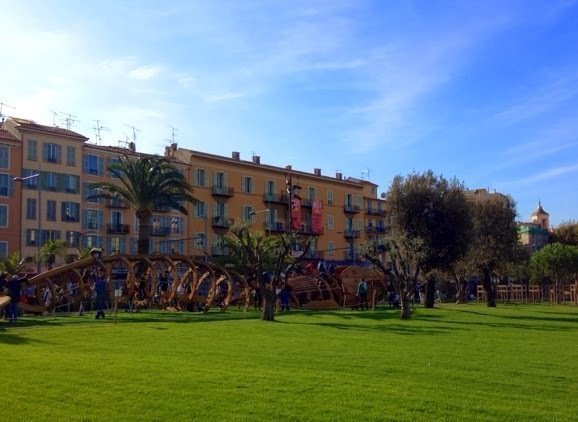 While on the subject of plants, I discovered something new about Nice researching this piece.  It used to be the world’s biggest grower of carnations in its heyday during the 1950s and 60s.  The oeuillet de Nice was grown in glasshouses on the hills surrounding the town and is still the city’s emblem, but pressure to build on the land coupled with ever-increasing competition from Holland eventually saw the decline of carnation production in the 1970s.  To honour this tradition and keep a little bit of history alive there is a section of planting given over entirely to the oeuillet de Nice. Packed in altogether, in such a pretty setting, the flowers look much better than the dreary carnations in supermarket bouquets! 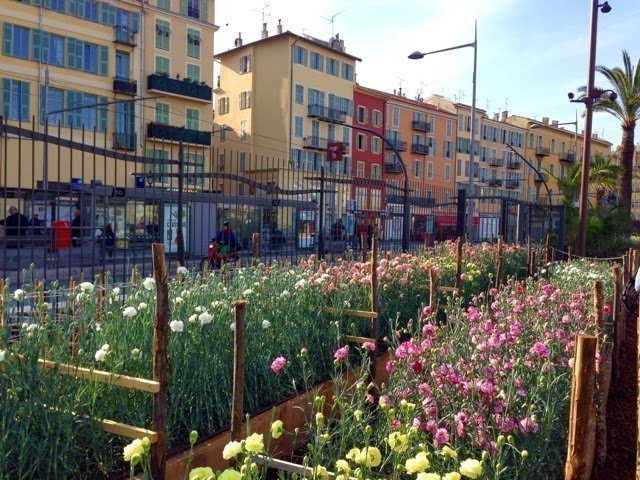 I’ve always loved the central square in Nice, Place Massena, with its rich red buildings, black and white checked paving and funky crouching-men statues by Jaume Plensa. And now it’s even better as the two sides of the park seamlessly cross the vast expanse in a haze of mist periodically dissected by the sleek modern lines of the tram.  I look forward to seeing how the Christmas market and Carnival celebrations fit in in this new arrangement. 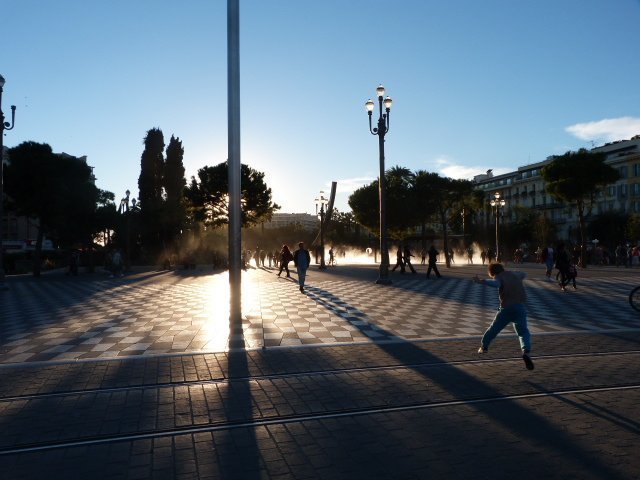 Finally, Nice’s Mayor has big ambitions to make his town a leader in green/ecological cities.  There are plans for an “Eco-Valley” along the Var river and it was one of the earliest places to install a bike share system.  This park is part of the plan, creating a centre of town for living in, for pleasure and leisure but not for cars.  Hence the demolition of the bus station and car park.  As far as I’m concerned it’s a great success.  The park’s creator envisaged a sophisticated but simple urban space.  I think that sums it up perfectly.  I hope you enjoy the photos I took a couple of days ago. 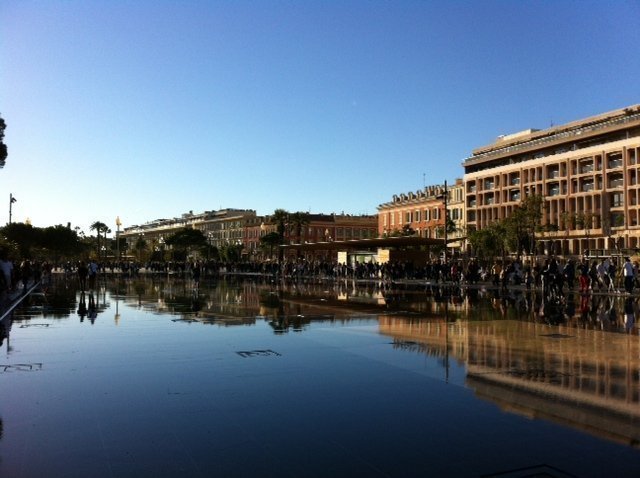 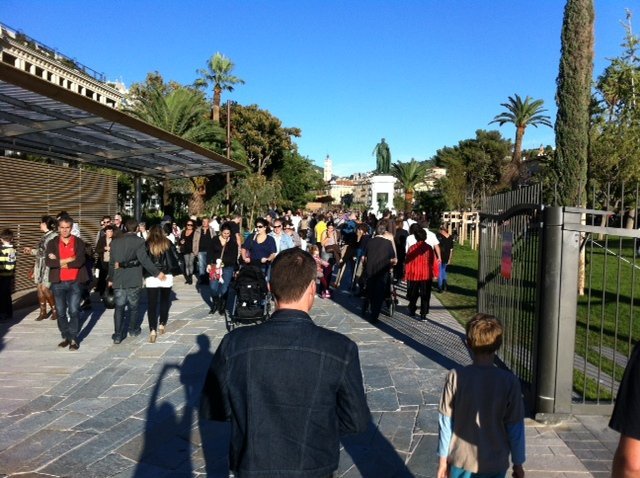 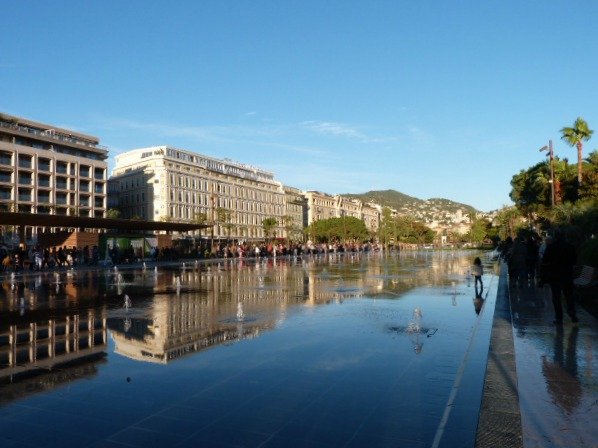 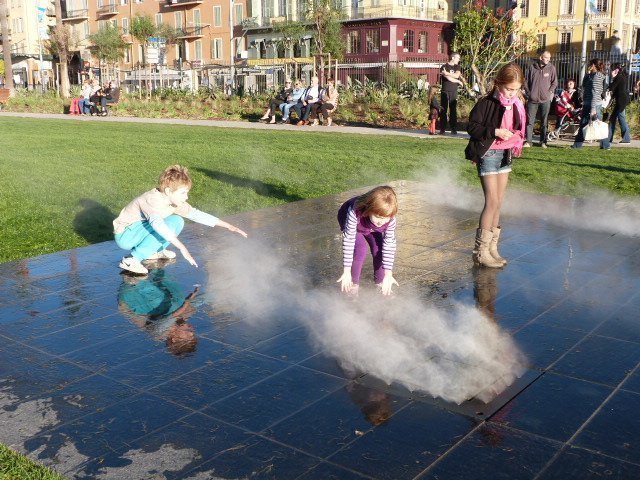 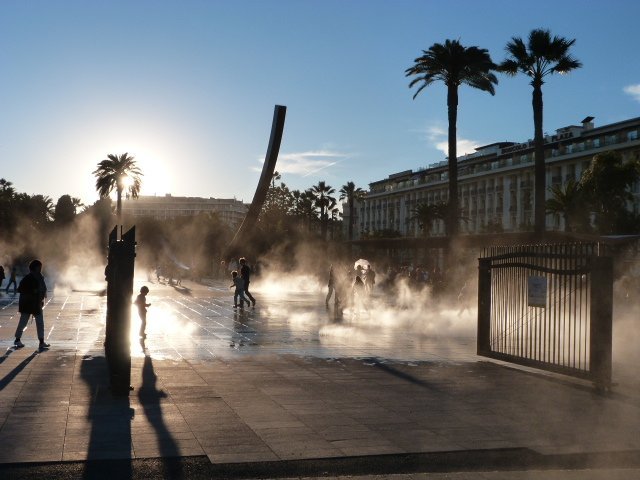 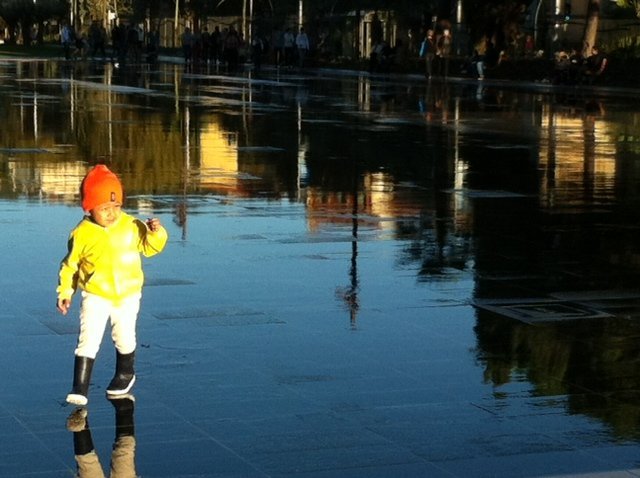 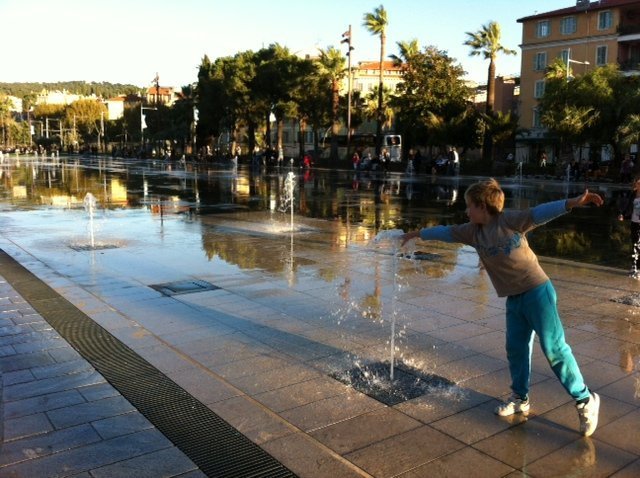 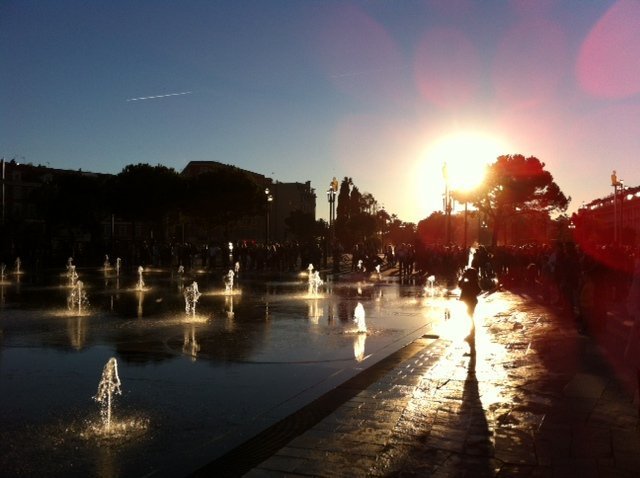 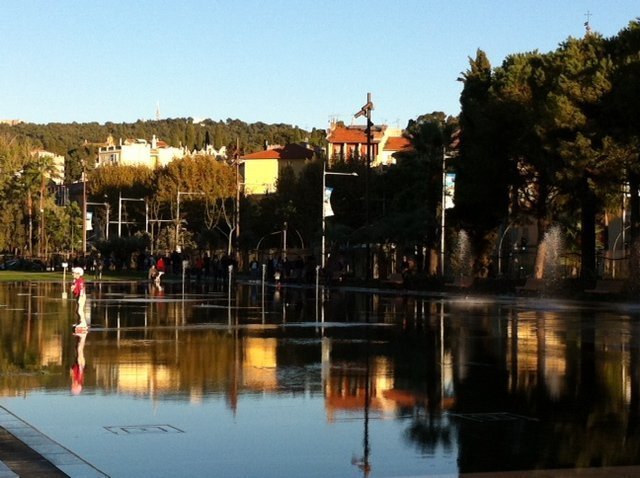 *UPDATE 2015: not being allowed to sit on the grass was a temporary measure and lounging, sitting, picnicking etc is most definitely allowed!  What do you think of this new urban space?  Have you been there, or anywhere like it?

Save this PIN for later 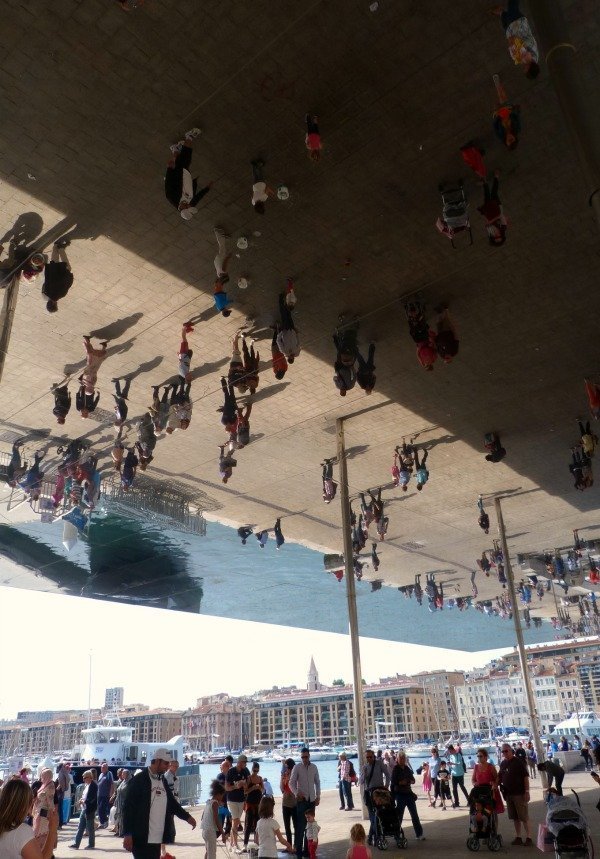 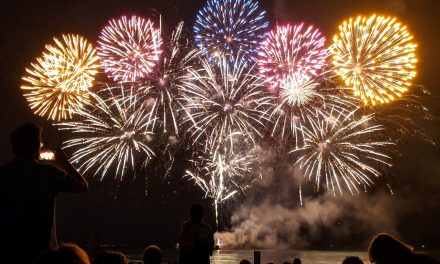