We’ve just done our first ever Vide Greniers and as successful as it was we won’t be in a rush to do another!  Firstly let me explain what a Vide Greniers is: it literally means empty attics which makes it a sale of old junk.  I mean treasures!  It’s pretty much the equivalent of a car boot sale/jumble sale/yard sale.  The premise is that it is meant to be for individuals not professionals and pretty much anything goes: you can sell clothes, toys, books, collectibles, sports equipment etc. It has to be used not new. While on the definitions I’ll just mention Brocante.  Technically a Brocante is a very similar sale but originally meant for professionals, mainly selling antiques.  Nowadays though these two terms are pretty much interchangeable and the differences are minimal if any.

Now, when I said “anything goes” it’s not as simple as that.  This is France where many things are strictly regulated and get this…a household is only allowed to do two Vide Greniers a year, no more!  Imagine actually having a rule about this. People (bureaucrats) are actually employed to enforce this.  I find it incredible that there is a law for how often you can sell your junk, but maybe I’m naïve and these rules happen all over the world….I just can’t see it.  To get a pitch at a Vide Greniers you have to enroll, often months in advance, and pay a fee.  With your enrolment papers you have to send off a photocopy of your ID.  The organisers are then obliged by law to declare all the sellers.

You may already get from my tone that I’m not the biggest frequenter of secondhand sales.  I know there are bargains to be had and lots of lovely stuff out there, but there’s just so much junk in the way that they don’t really tempt me.  So having done a massive sort through of the kids’ toys recently I needed to find a way to get rid of them all.  We had so much excess stuff, that the kids had outgrown, some games barely even used that I couldn’t bring myself just to chuck it all away.  Two things: firstly, it was all perfectly good and there were surely other children out there who’d appreciate it and secondly, I felt it was criminal to put it all in landfill.  My preference would be to give it all to charity but this is another big difference between France and Britain – the charity shops that are so familiar on every high street in the UK don’t exist here. The only vague equivalent is Emmaüs which is well known but not conspicuous.  You have to search for your local branch and they usually don’t have a “high street” shop but will come and collect from your home.  All very well but it’s a Catholic charity, and while I’m sure it does a lot of good, it’s not for me.  I tried to give away a lot of things, to the local library, crèche and playgroup but they weren’t interested so I reluctantly decided to sign up for the Vide Greniers.  In this case, it was organised by one son’s handball club and being such a lovely club I was happy my fee was going to them. 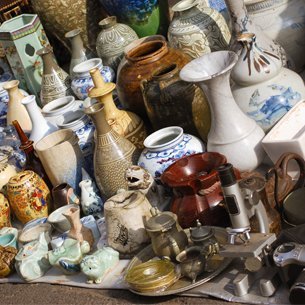 So why won’t I be in a hurry to do another one?  It was a long, cold and ultimately boring day!  I was glad I was with JF, not only for company, but as protection from the aggressive “professionals” who swarm you on arrival.  They are mainly after electronics and go as far as shining torches into the car in the dark (yes, we arrived in the dark!) to see what’s there.  But they push and shove and get in the way of setting up and generally make it quite unpleasant.  Another thing, you find yourself haggling over 50 cents.  All our toys were in working order, in good condition and very well priced.  Nothing was over 2€ and yet people would offer 1€.  I know it’s often just for the principle of haggling, which I’m highly experienced in having lived in Asia, but it ended up getting to me that people were basically downright rude over such absurdly little amounts of money.  In the end we were there to get rid of stuff, to children who’d give our toys a new home, it wasn’t about the price and we really didn’t want to come home with anything, so we took whatever was offered.  I tell you if I could find bargains like the ones we offered I would certainly go to more sales.

The best thing about the day (apart from coming home without any toys, oh and a wallet stuffed with cash)?  The first glass of vin chaud of the season, at 8.30 in the morning.  Not an hour I’m used to drinking it I can tell you but it went down very well!

If you want to find out where there’s a Vide Greniers or Brocante on in your area click here, you’re sure to find one coming up soon; they’re very popular.