I had a number of requests for the recipe for the pear and plum tart I mentioned in my last post, so here it is, though it’s barely a recipe as I really did just throw it together.  When you’ve got ripe juicy fruit and some ready-made pastry in the fridge you can’t go wrong.  I’d say the fruit tart is to the French what the fruit pie is to the Americans and the fruit crumble is to the Brits.  It’s your regular go-to easy-peasy dessert that you can make without thinking and know it’ll be well appreciated by whoever you’re cooking for.

So here goes:  you’ll need fruit!  I used pears and plums but you can replace them with apples, apricots, peaches, raspberries or whatever fruit you have plenty of.  I think I probably used about 300g of each, though I just gauged it visually.  Slice up lots.  If it doesn’t all fit in the dish just eat it separately while cooking!  You also need a packet of ready-made short-crust pie pastry (pâte brisée). Now of course you can make your own pastry, and better cooks than I would, but in this case, for an improvised mid-week supper I used ready-made.  I always have some pâte brisée and pâte feuilletée (puff pastry) in the fridge for stand-by and why wouldn’t you when the choice in French supermarkets is so enormous?  This photo only shows about one third of the total choice in my local shop, owing to the fact that I cropped it into Instagram format. 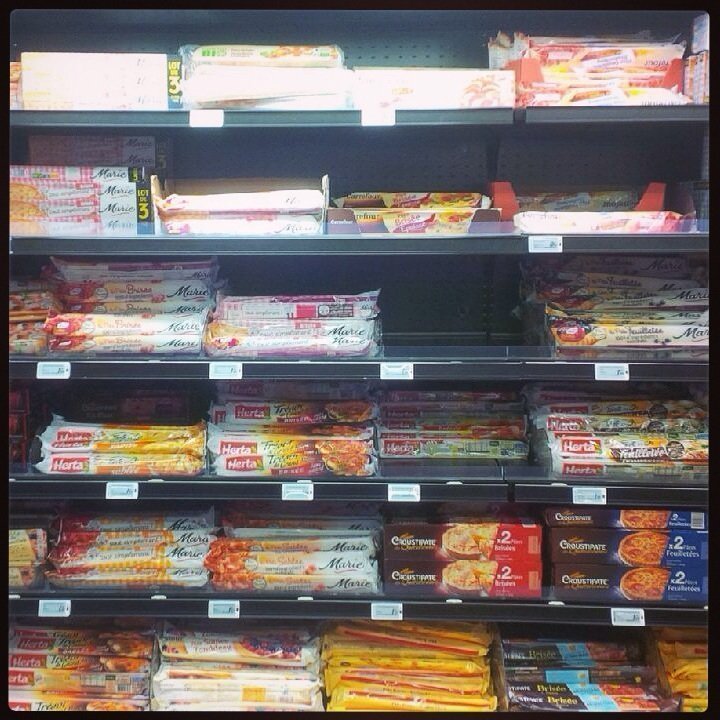 Roll out the pastry over a 25 cm round tart (flan) tin, pressing it down and prick it all over with a fork. It conveniently comes prepared for this size in France.  I like to leave the edges flowing over but neaten them up if you prefer by trimming off the excess.  I love pastry and am happy to have extra. 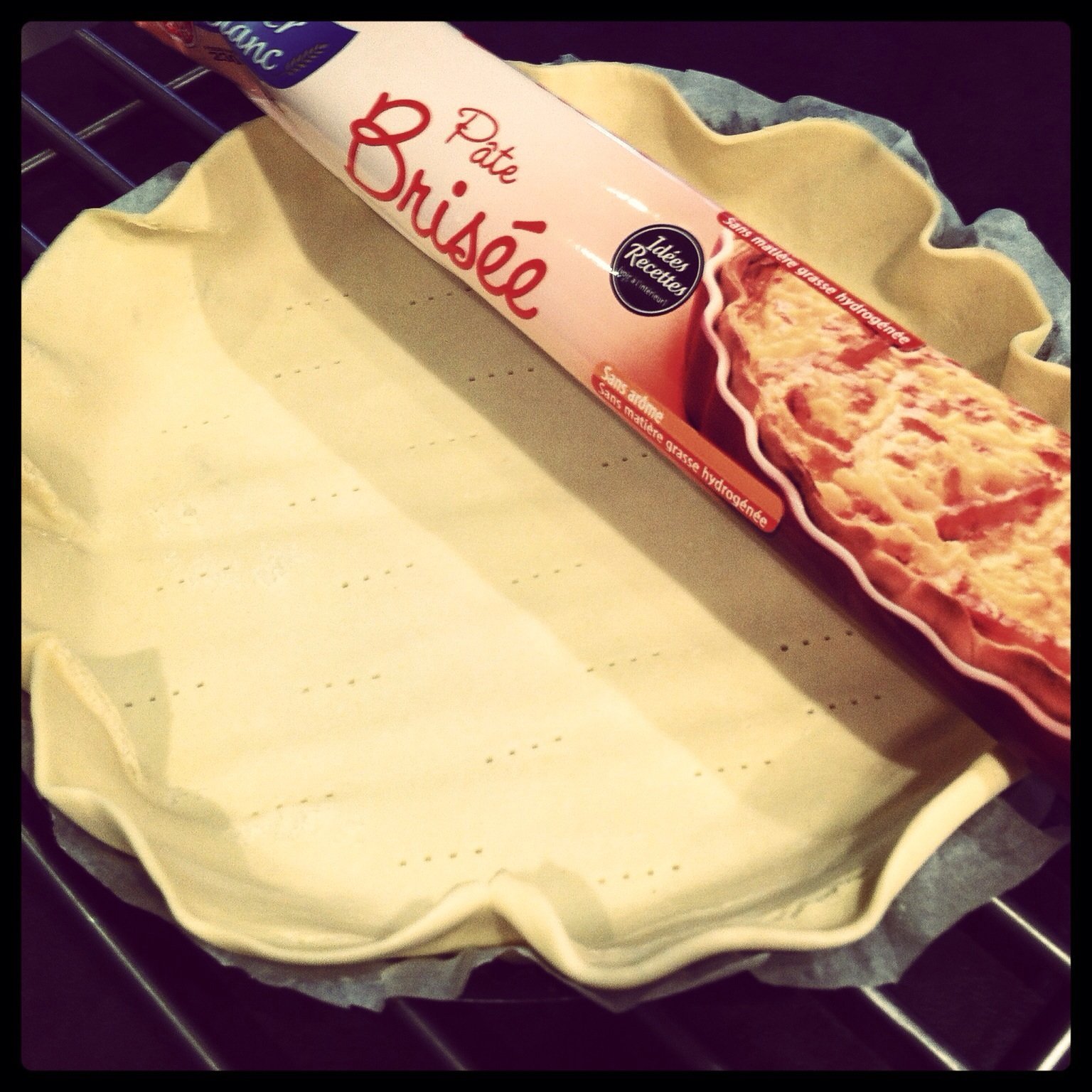 Spread a thin layer of jam over the base.  I used blackcurrant because that’s what I had and I thought it would go well.  This step isn’t necessary if your fruit is very juicy, but I just like the added flavour. 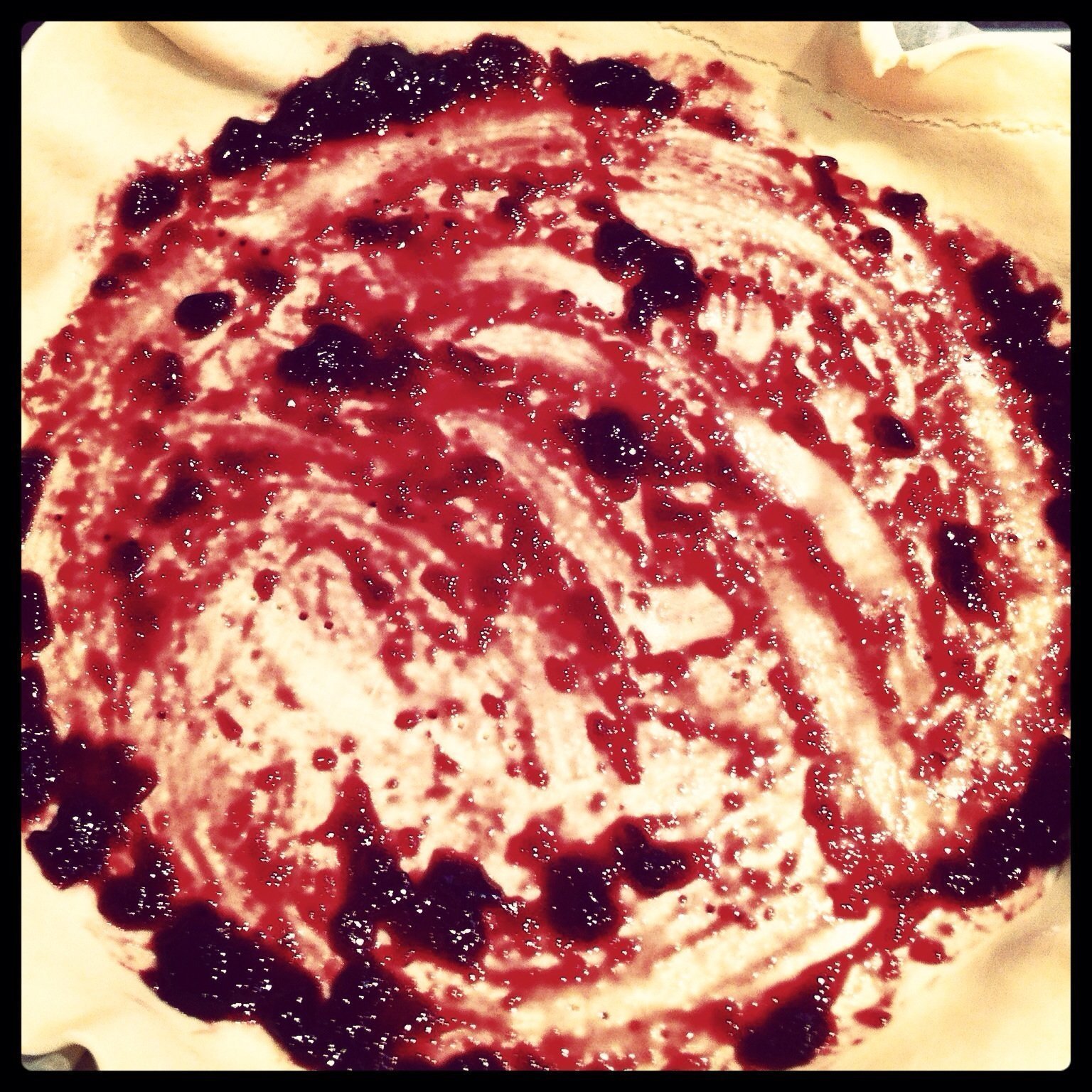 Peel any fruit that needs it and chop into thin slices, then layer in a circle starting from the outside working in.  By the middle I realised I had a few too many plums so I just piled them in a heap, all pretence at sophistication abandoned.  I told you I literally “threw” this together! 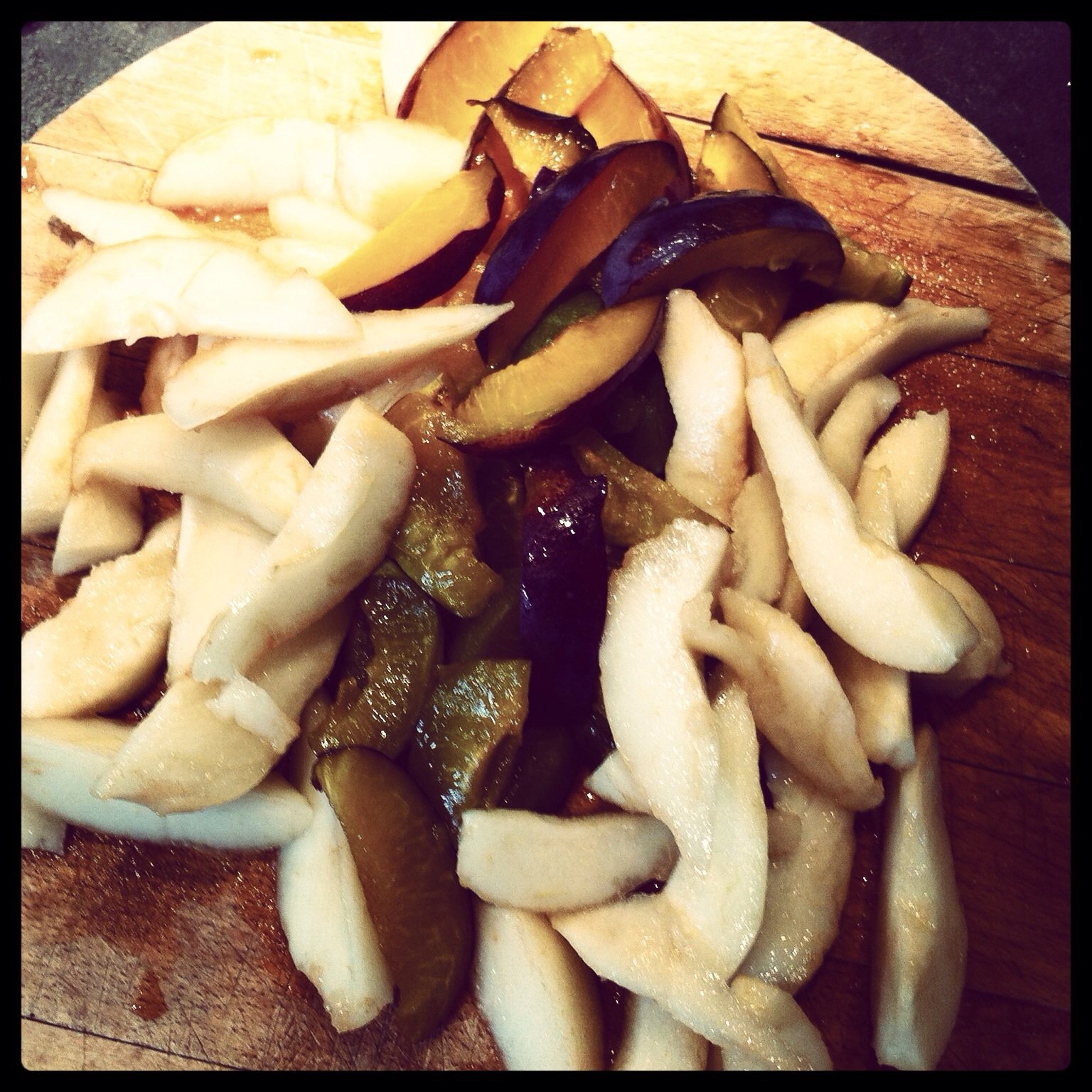 Just for good measure I then sprinkled a packet of vanilla sugar over the fruit (7.5g or 1.5 teaspoons). Dark brown sugar, cane sugar or honey would all work well. 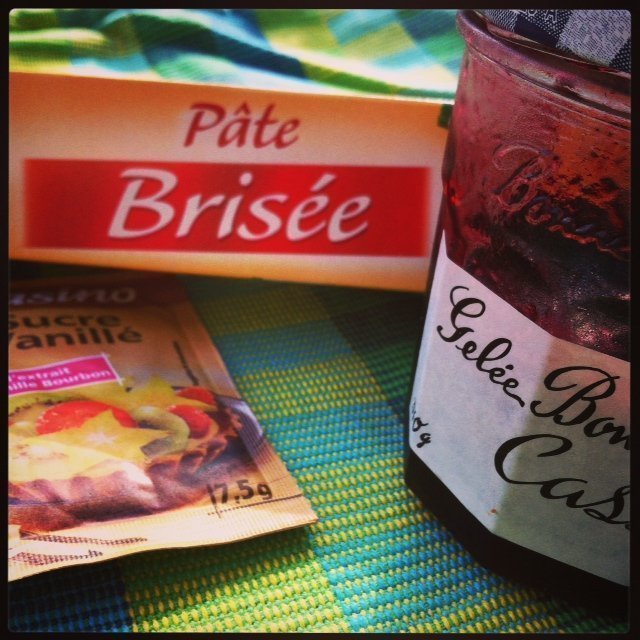 Pop the tart in the oven at 200°c and bake for half an hour, or until the pastry looks golden and the fruit a little caramelised.  It is best eaten warm, not hot, served with crème fraîche or vanilla ice-cream, but is also good cold. 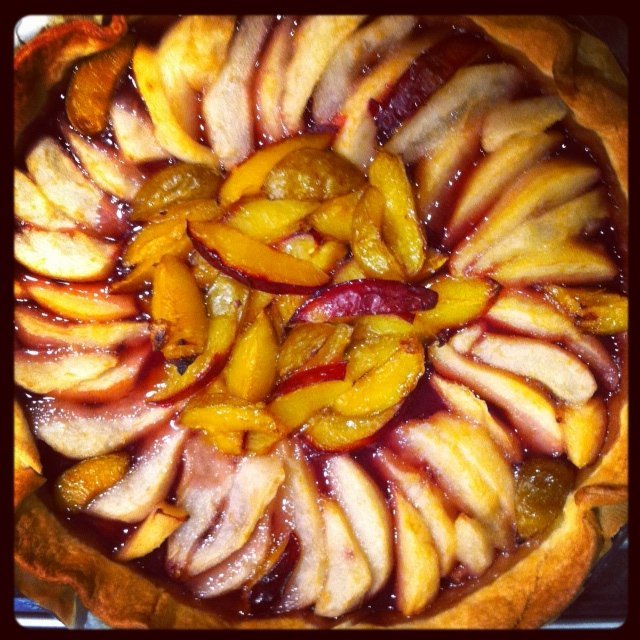 These photos can be found on my Instagram feed if you’re into that kind of thing, pop over and follow along (you can have a browse while waiting for the tart to cook)!  Now, didn’t I tell you it was easy? Who’s having French tarte aux fruits for tea?

If you enjoyed this why not PIN it for later! 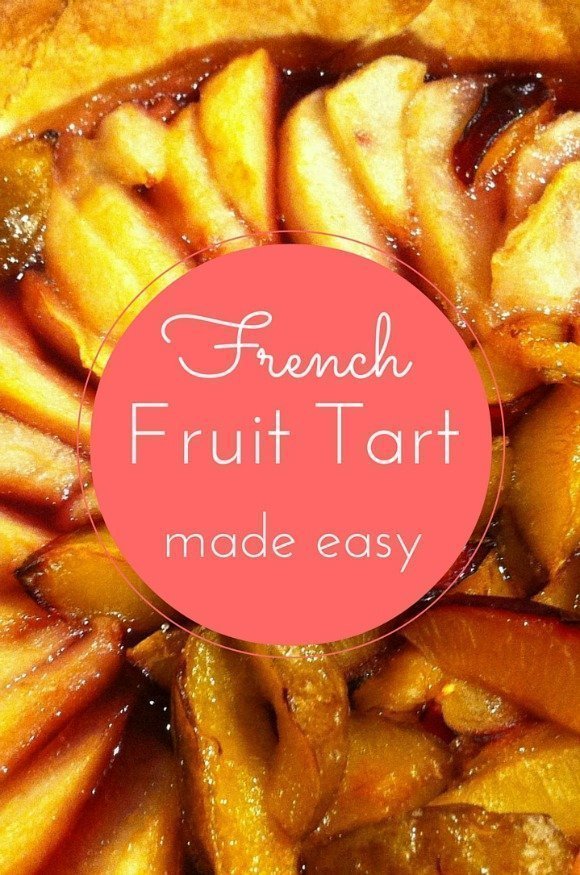 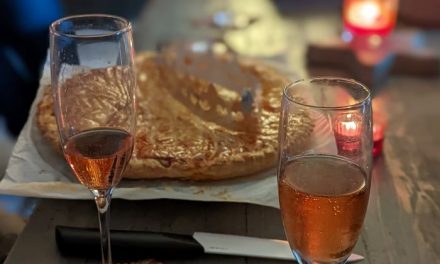 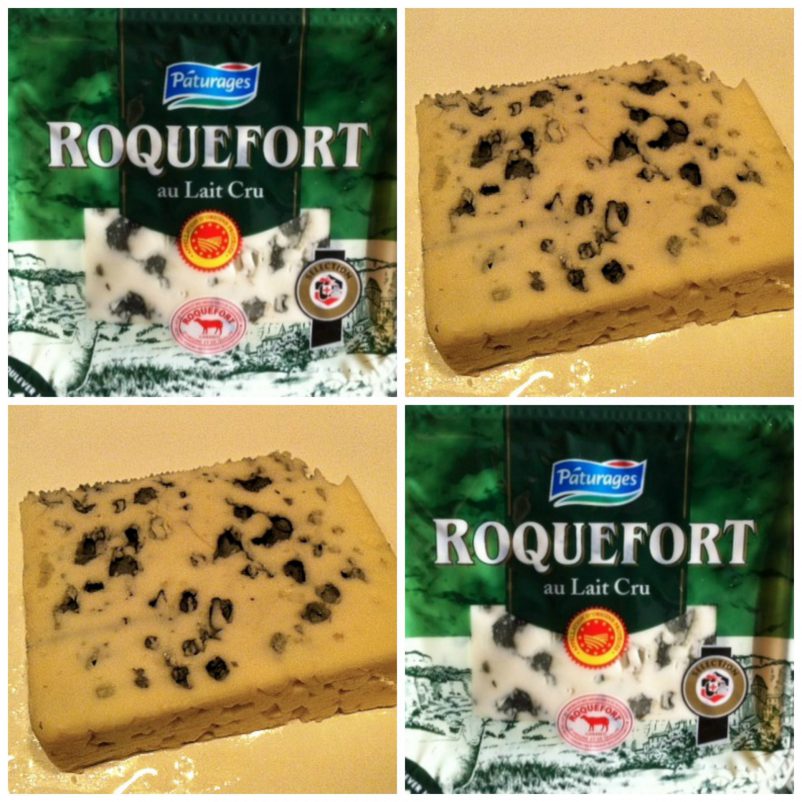