What is goûter?  Definition:  Goûter v. to taste, n. a light meal in the afternoon.

Goûter is an institution in France without a real equivalent in British culture.  It’s tea-time, almost religiously eaten at 4.30 pm, almost exclusively by children as they come out of school, consisting solely of sweet treats.

My first experience of goûter was as an 10 year old on a French exchange for a month at school in Vernon near Paris. Most of that exchange was horrendous but it introduced me to the delights of squares of chocolate in a chunk of baguette and the classic tea-time biscuit “Prince”. Oh, what a treat! Chocolate in bread has got to be one of life’s greatest simple pleasures.

Now, as a mum in France, goûter is very much part of everyday life.  When I first started giving my children afternoon snacks to keep them going I would insist on pieces of fruit, dried fruit and raw vegetables.  At birthday parties I would always serve sausage rolls, crisps and sandwiches but no one touched them.  I remember feeling quite mortified when a French mum remarked “savoury at goûter, gosh, how odd!” (in French of course) as the realisation dawned that it just wasn’t done.  But, hey, I 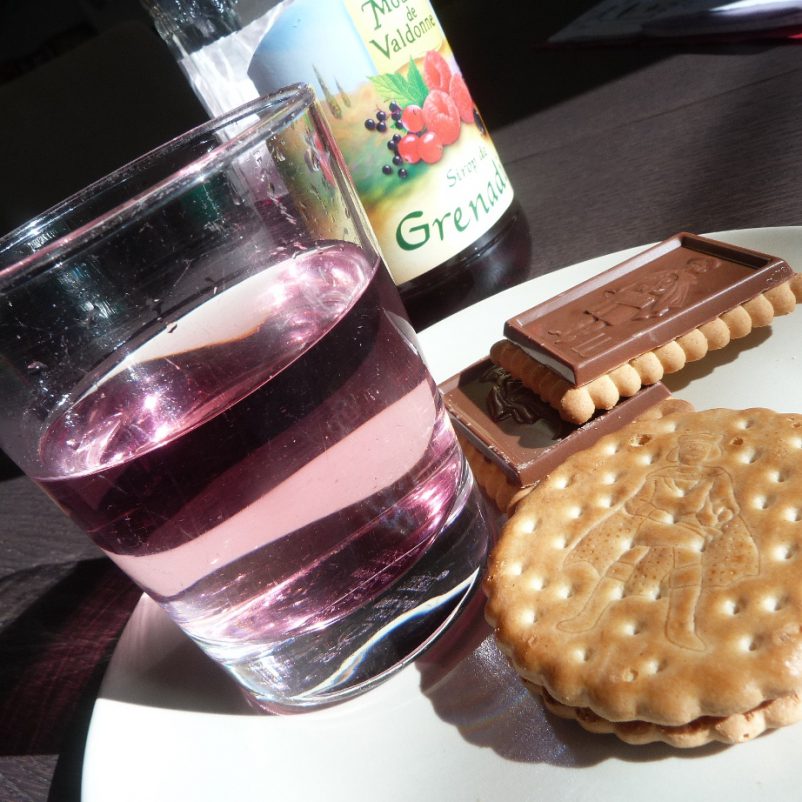 wasn’t French and I wouldn’t change just because I was in France, I’d continue my resistance to a 100% sweet tea (for just a little bit longer!)  More than ten years later I realise how much of my adopted country I’ve assimilated as I now take a packet of chocolate biscuits or a pain au chocolat to the school gate along with everyone else!

The thing is, dinner in France is usually served around 8 to 8.30 in the evening and children eat with their parents so they need something to keep them going. Primary school and maternelle (pre-school from 3-6 years old) have the longest school day in the world, from 8.30 am to 4.30 pm and the kids usually come out starving.  If they are then going straight to sports or other extra-curricular activities (which is very often the case particularly on Tuesday evenings as there’s no school on a Wednesday) they need to eat goûter on the trot.  Hence the packet of biscuits at the school gate.  If they eat at home the snack may consist of a tartine (open sandwich) with jam or nutella, or a croissant or chocolate in bread or some biscuits (usually chocolate, are you 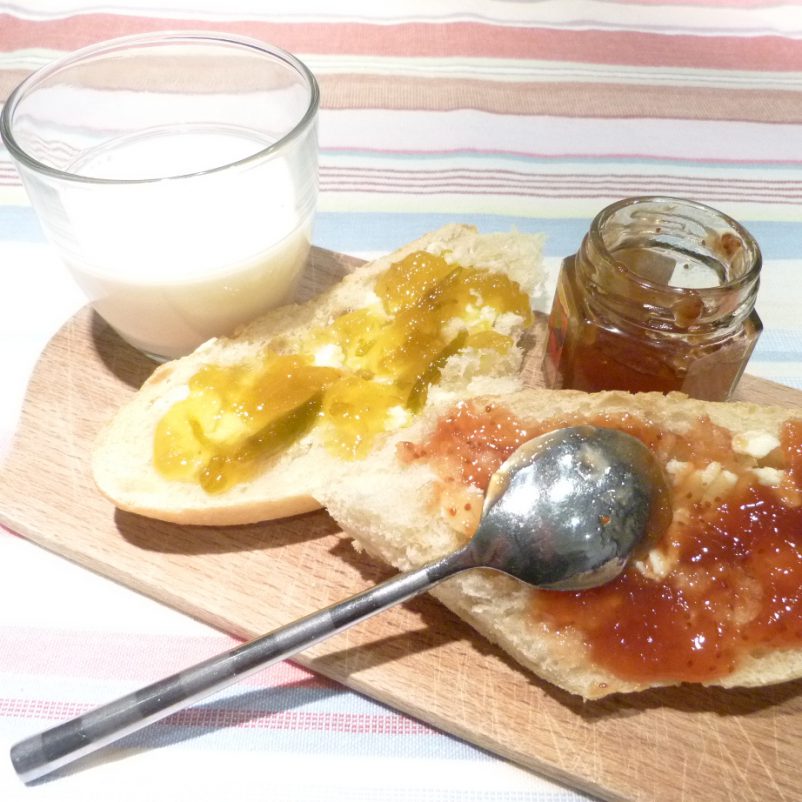 getting the theme here?) accompanied by a glass of milk or Grenadine. French children are brought up on Grenadine in the way British have Ribena. It’s a mixed red fruit cordial (not pomegranate as the name should suggest, grenade meaning pomegranate) diluted with water.  It’s so sweet it makes your teeth curl!

Whether you approve of this sugar intense snack or not, it can’t be all wrong when you consider the fact that French children suffer far less from obesity than in other industrialised countries.  Yes it is beginning to creep in now but that’s probably more related to fast-food and the ever increasing presence of ready-meals than this age-old mid-afternoon snack.  It is still very rare to see an overweight child in most of France and I can honestly say there are none in our local primary school of 600 or so kids.

Is this yet another example of the French paradox?  What do you think of this?

French yogurt cake – the easiest cake in the world

What is a bûche de noël? 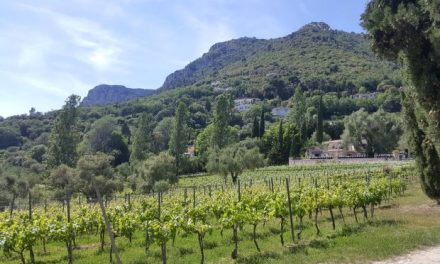 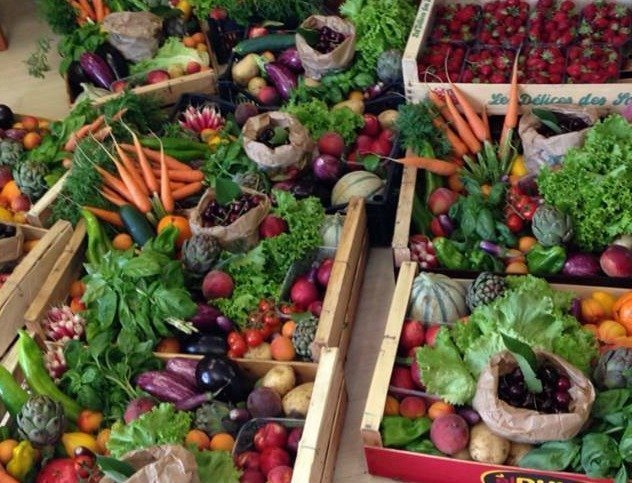 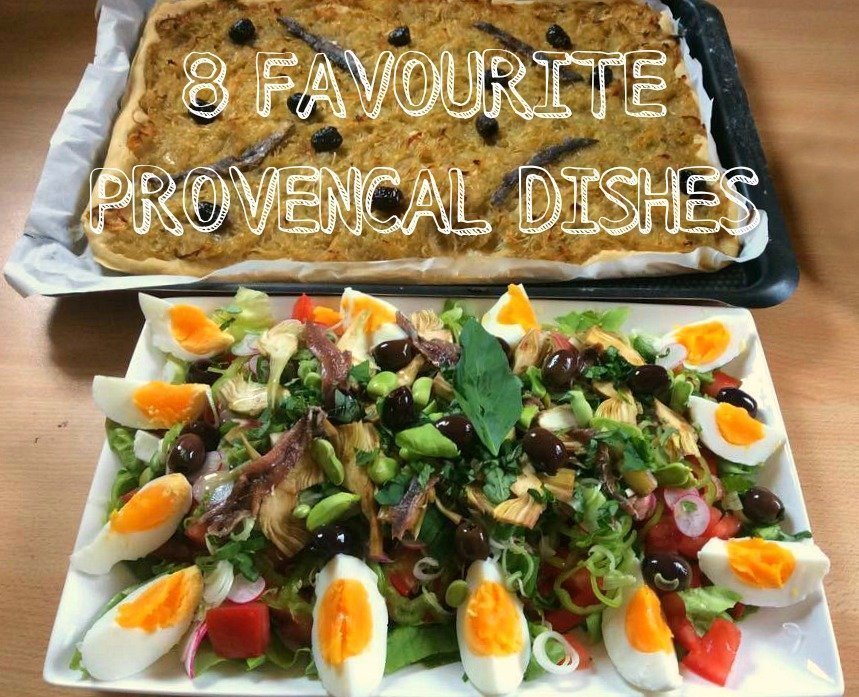