It’s Carnival Time. Carnaval de Nice is in full flow which means, to put it bluntly, it’s time to pig out on ganses! Ganses are delicious light deep-fried sweet pastries from Nice in the South of France. They are traditionally made for Mardi Gras, the last day when you can eat fat before Lent, though these days they’re available throughout the month of February.  Boulangeries are all groaning with ganses, food for carnival, at this time of year.

Ganses (“li gansa” in the local Niçois language) are commonly known as beignets de carnaval (carnival doughnuts) as they are to carnival what crêpes are to Chandeleur – vital!   They have a delicate taste and melt-in-the-mouth texture and are best served warm, lightly powdered with icing sugar.

You can find similar treats in many parts of France, called bugnes in Lyon, oreillettes in Provence, merveilles in Bordeaux and bougnettes in the Languedoc.  However, one of the distinguishing differences between those from Nice and those from other regions is that the niçois ganses are flavoured with orange flower water.  In reality the regional differences are slight, it’s really only the name that changes.

Have you eaten ganses, food for carnival? 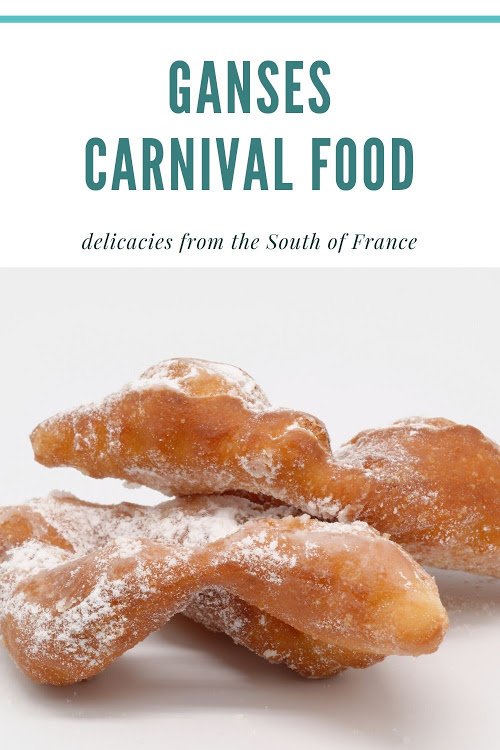 This post was originally published in Feb 2013 and has been updated.

Trompe l'oeil mural in Grasse of jasmine, one of t

Cafés buzzing with outdoor diners is a typical sc