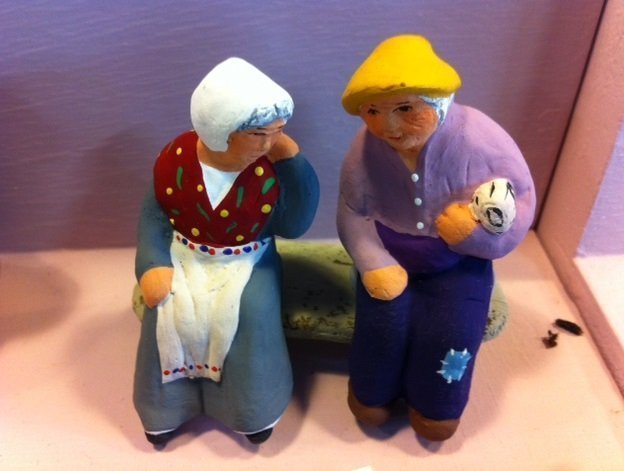 Santons, derived from the Provençal word santoun meaning little saint, are small painted clay figurines that are used to decorate Christmas Nativity crèches (cribs) in Provence in South-East France.  If you’ve spent any time in this area during the festive season you may well have seen them either for sale in Christmas markets or placed on a decorative crèche somewhere. They are very popular collectables, with websites selling them to overseas markets, particularly USA, but they are much more than just tourist trinkets. 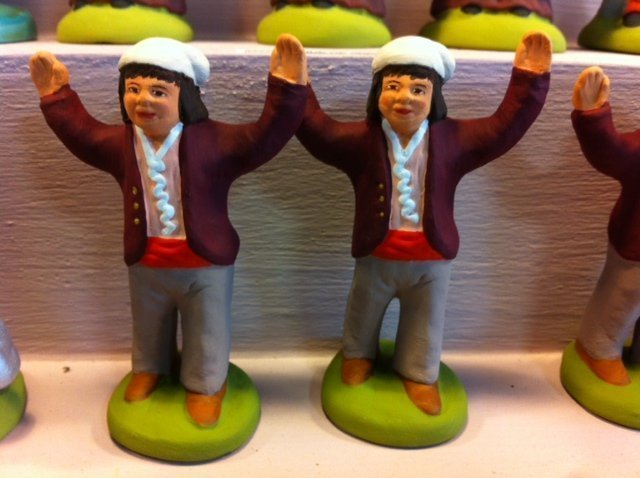 The history of santons dates from the French Revolution in 1789 when churches were closed, and Midnight Mass and church crèches were banned.  In a bid to keep traditions and religion alive people started creating their own crèches in private homes and a small industry producing figures grew up around this, particularly in Marseille. Santon makers, Santonniers, originally created traditional Nativity characters but soon started to draw inspiration from life around them and began including figures from ordinary village life.  You can find everyone from fishermen, tinkers, basket makers and water carriers to tramps, bakers, chimney sweeps and washer women alongside the baby Jesus, Virgin Mary, Joseph and the three Wise Men. 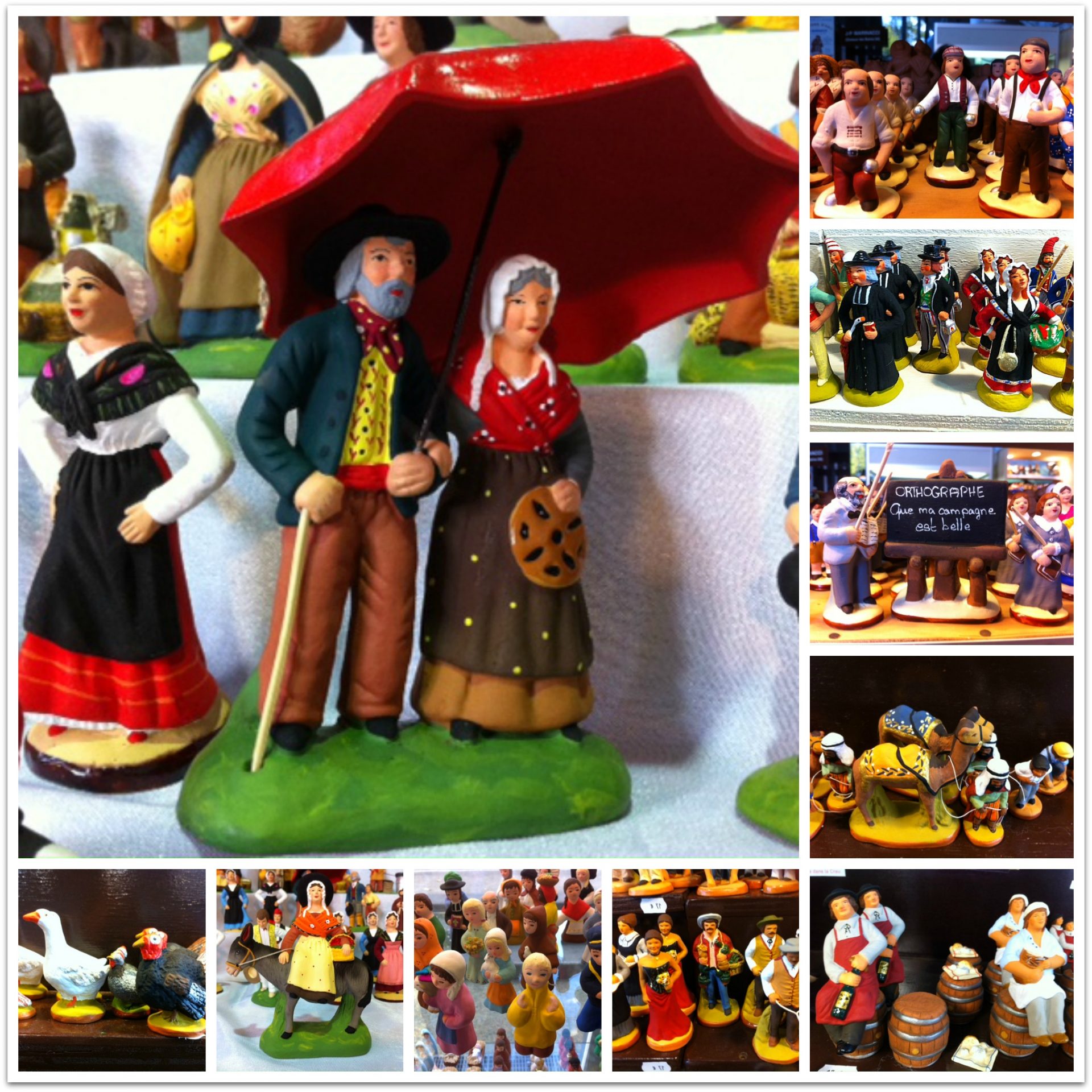 There are several well-known characters who grace every crèche such as the village idiot lou Ravi who is traditionally placed first to bring good luck. Boufareu an angel, guides people to the stable and is usually placed in a prominent position.  Other notable characters include the blind man guided by his son, the Mayor, the priest, the monk and lou viel and la vièio (the old man and the old woman) positioned together either on a bench or arm in arm.  There are plenty of other characters, all either taken from traditional Provencal Pastoral plays or contemporary culture. One notable comic personage is the Caganer, literally the “crapper”, represented as a peasant spreading manure, usually with bare bottom and a poo behind him!  This character was traditionally found in Catalan crèches dating back to the 18th century and is seeing a rise in popularity again.  It is not considered disrespectful to put a caganer in a traditional crèche as long as it is placed at the back behind something such as a shed.  It is thought to be both a symbol of fertility and an irreverent joke reminding us that no matter who we are, we all have the same bodily functions! 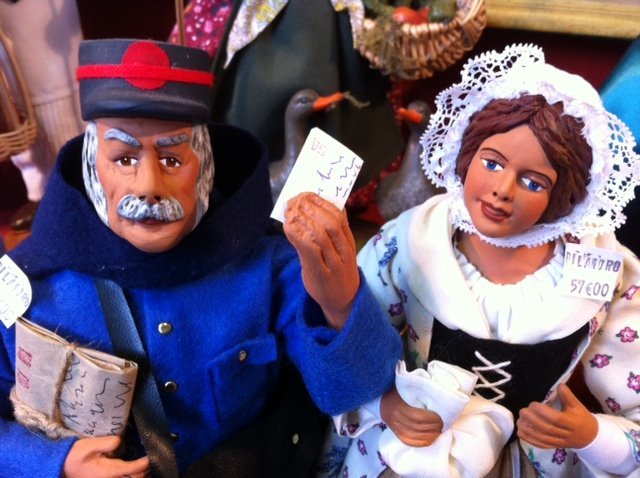 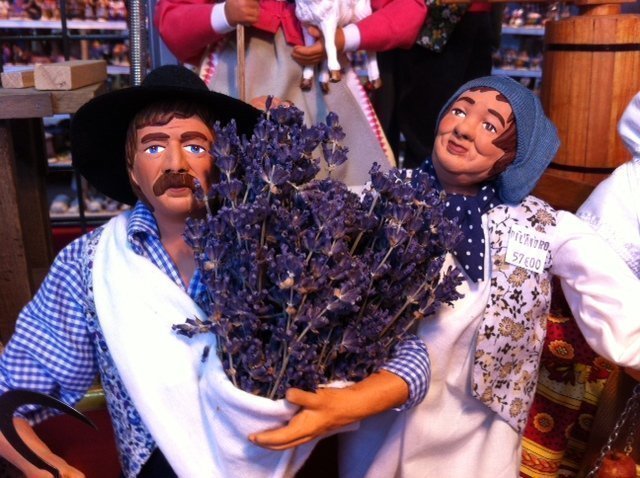 The santons are placed in a village setting with the crèche in the middle surrounded by typical buildings like the church, a windmill, stables, cottages, a bridge and vegetation such as olive trees. To bring the scene to life moss is often used to represent grass and branches of rosemary and thyme make trees. Water is often fashioned out of aluminium foil. 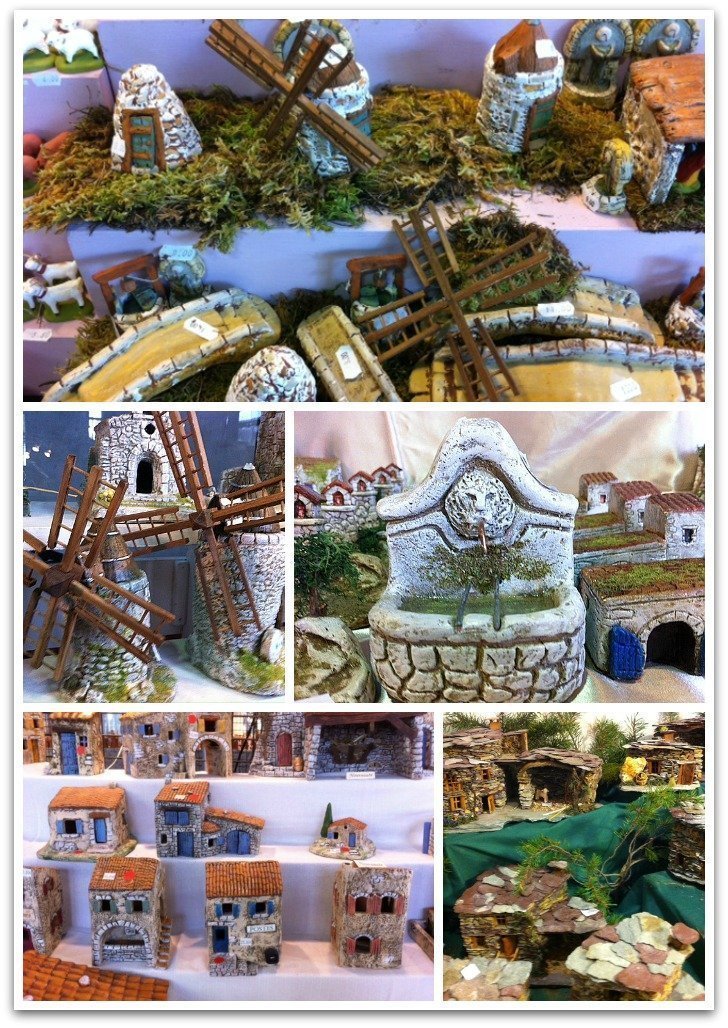 Households tend to collect pieces, building up their collection by adding new figures every year, and even very occasionally commissioning figures to represent particular family members.  The vast majority of santon makers are in the area around Marseille/Aubagne and since 1803 Marseille has held an enormous and very well-known fair, le Foire aux Santons, from mid November to the end of December every year.  Locally in the Alpes-Maritimes, where there are 6 santonniers, the biggest selection is to be found at the annual fair in Mouans-Sartoux.  It takes place from mid November to the 24th of December. Both these foires are great places to view the enormous variety of santons avaialble and all those displayed here are guaranteed “made in Provence”. These fairs sort of unofficially mark the beginning of the Christmas season, a couple of weeks before city illuminations are switched on and regular Christmas markets open. Santons are also often sold at regular Christmas markets in the region and in specialist shops, especially in Marseille.  If you want to see/buy santons out of season it’s possible at the Musée du Santon Marseille, the shop/museum of master-santonnier Marcel Carbonel. 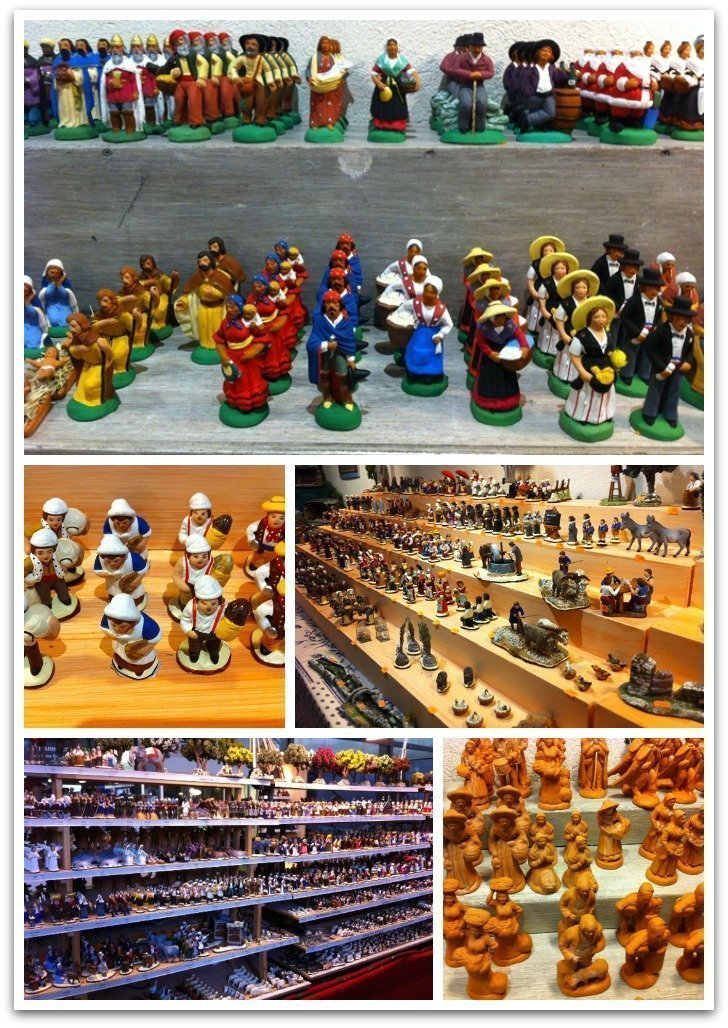 Santonniers each have their own style and some produce items that are so popular they are trade-marked.  This was the case with the “Coup de Mistral”, a shepherd in the wind created by Paul Fouque in 1952.  It was the first time a santon showed mouvement, you could practically feel the wind blowing his cape and hat.  Thanks to this particular figure Fouque became known the world over (in the santon-knowing world!)  Other santonniers have paid homage to well known artists, poets and singers by creating santons in their image as seen here in this model of the folk singer Georges Brassens. 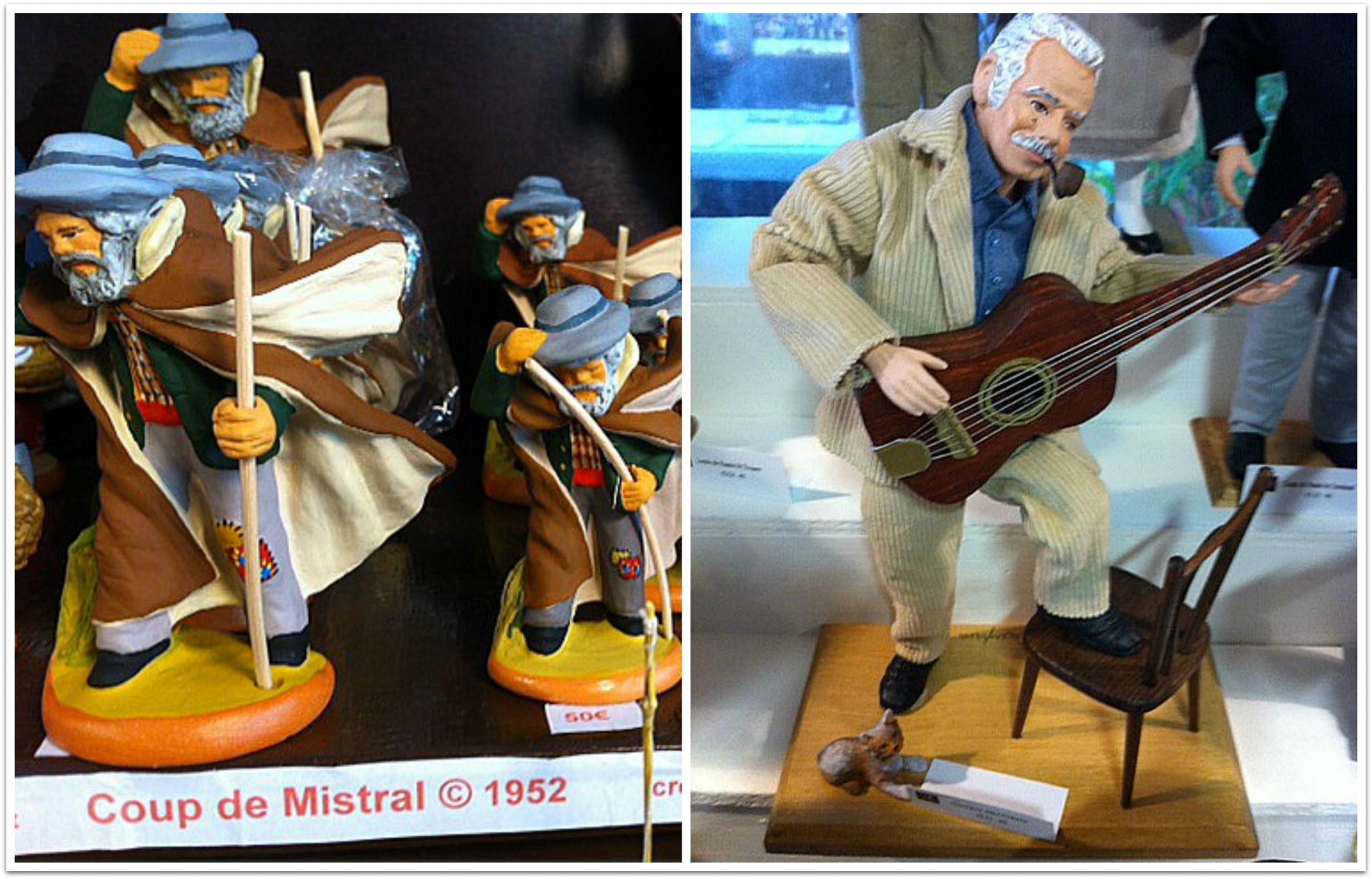 The best place to admire santons in situ on the Côte d’Azur is in the gorgeous hilltop perched village of Lucéram, behind Nice.  Every year throughout December this medieval village is decorated with over 400 crèches, containing hundreds and hundreds of santons.  For more on this unique and very special Christmas tradition, read here.

Have you heard of santons?  Do you have any festive traditions like this where you’re from?  Do tell. 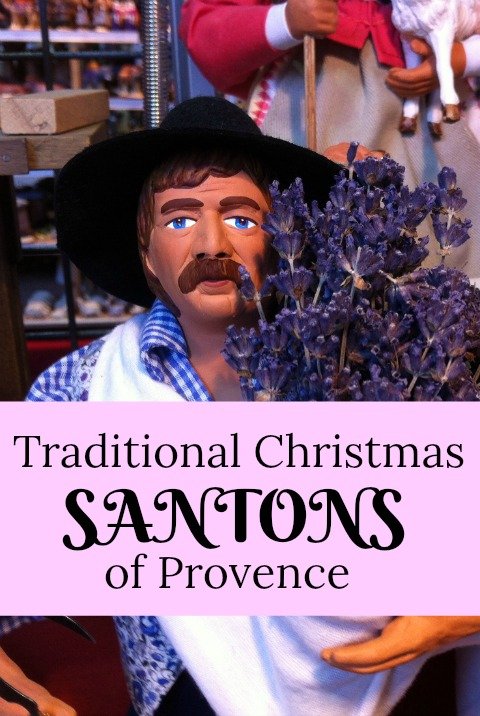