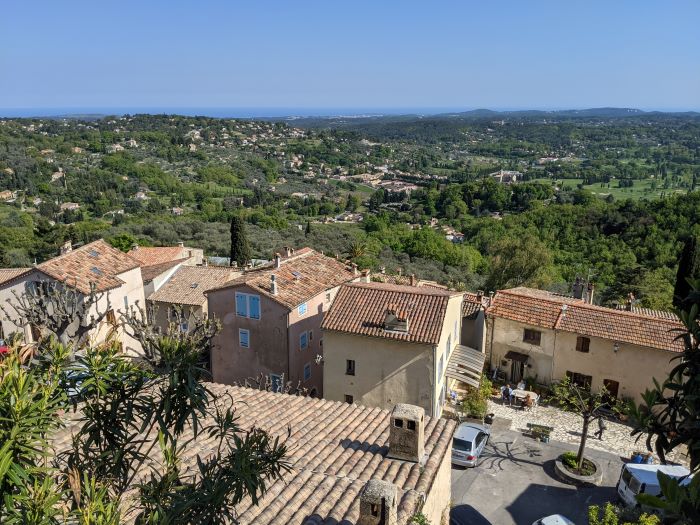 The Alpes-Maritimes department is bursting with a multitude of pretty hill villages, “villages perchés” in French, built during the middle ages in strategic spots on mountain tops and hillsides. There are at least 15 within half an hour’s drive of Lou Messugo, all with their own charm and more or less renovated/developed for tourists or left in an authentic untouched state. And then there’s Châteauneuf, my secret hill village. Read on to discover its charm and find out why I describe it like this. 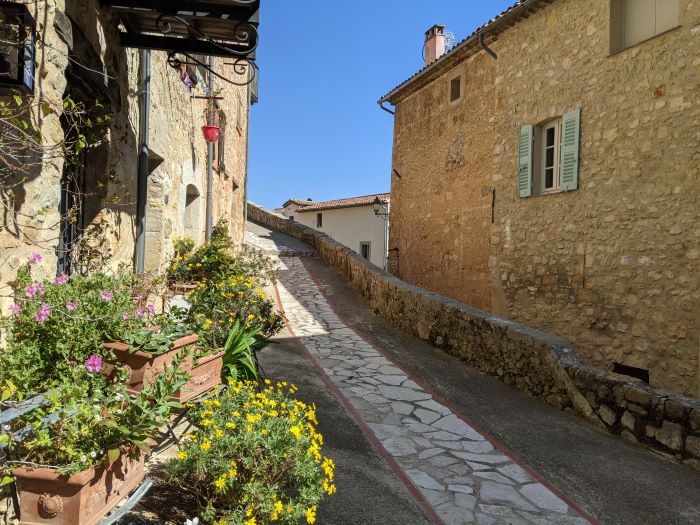 One of these dozen or so hill villages is so close to us and yet so hidden that many people visiting the area wouldn’t even realise it exists. (I’d be prepared to bet a significant amount of local residents – those not born here at any rate – don’t realise there’s a medieval “perched” bit either). I’m talking about the village of Châteauneuf located a few kilometres from its famous neighbour, Grasse. 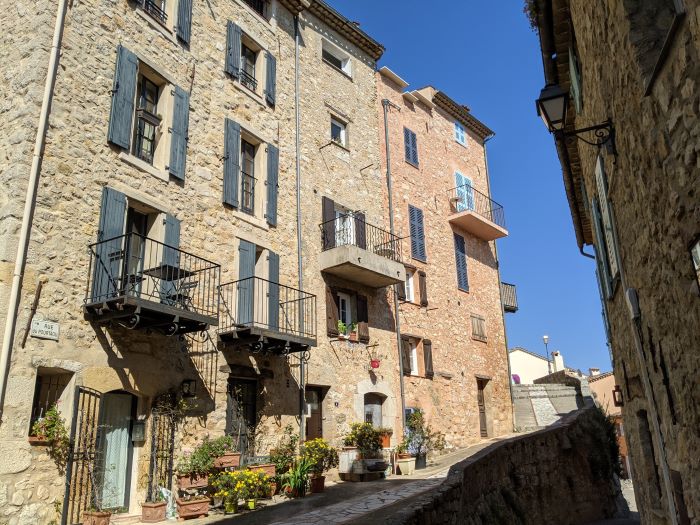 Viewing it from the south it looks obvious but it’s easy to miss the old centre as you drive through the modern strip of shops and cafés along the main road from Nice to Grasse. It just seems like a nothing kind of place, but tucked away on a hillside facing the coast and completely hidden from the road is one of the loveliest hill villages around. 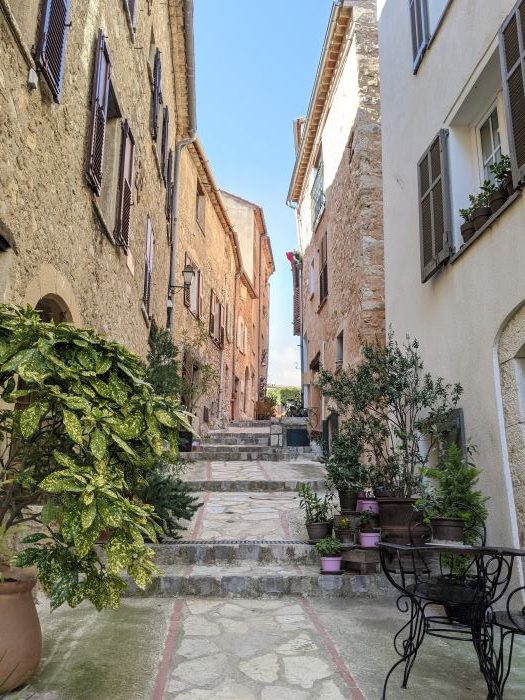 The tiny, historic centre of this secret hill village has a real charm; it’s like stepping back in time to a simpler era. It is devoid of shops, there are no commercial buildings of any sort, no cafés, nothing really except a couple of municipal buildings – the mairie and mediathèque (in old buildings of course) – and well-kept houses in empty paved alleyways. 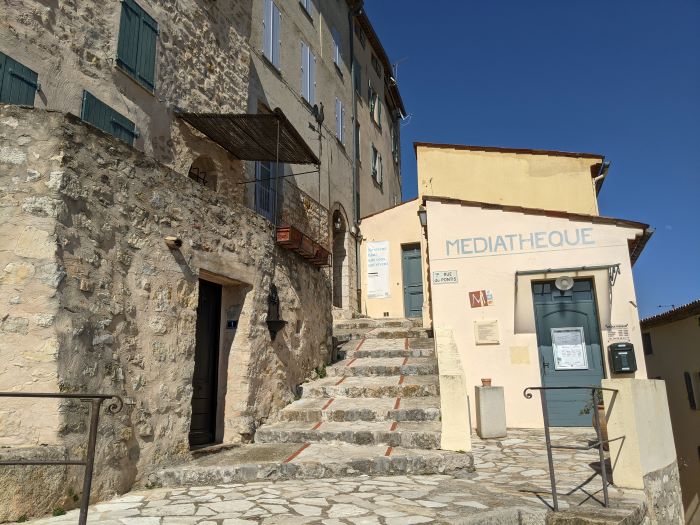 Châteauneuf lies at 417 metres altitude, overlooking the plain of Cannes with an incredible view of the Mediterranean, stretching from the “tête du chien” rock above Monaco to the Estérel mountains.  You can even see Corsica on a clear day (usually in the morning in winter). 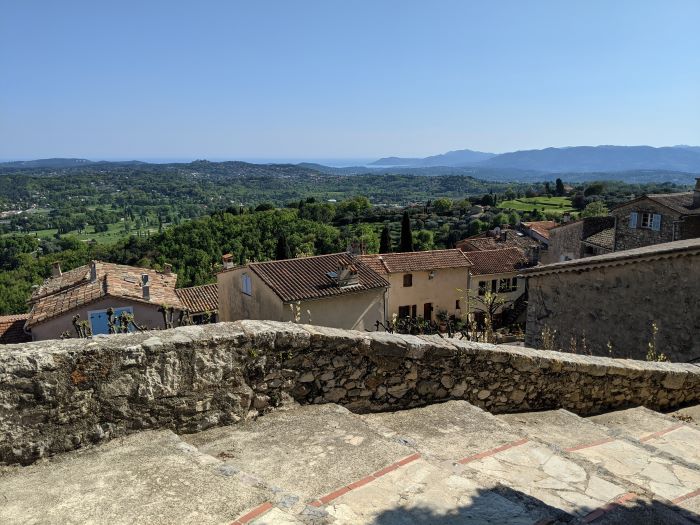 Its narrow alleyways, bursting with flowers and a multitude of potplants, sleepy little squares and 16th – 17th century houses are all classified sites (as places of historic interest). You can wander around the village for half an hour and not bump into anyone at all. 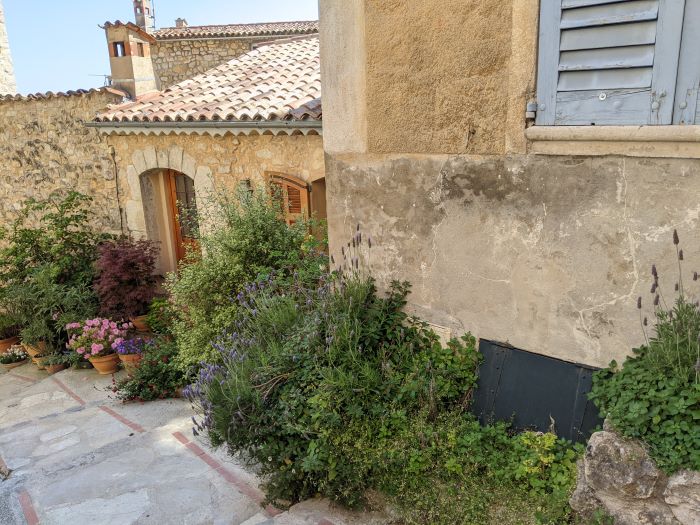 I first discovered Châteauneuf quite a few years ago when the kids’ primary school organised an “Olympiad” sports competition to coincide with the 2008 Olympic games. My elder son was the right age at the right time to be picked for the Roquefort team so we spent three very hot days cheering him on. 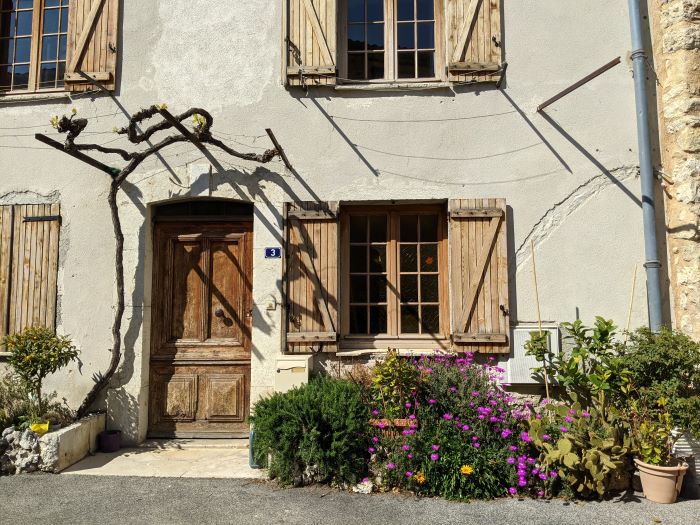 The sports fields were off the main road up the hill in the old part of town, an unlikely a setting as you can imagine. With a dozen nearby schools taking part, the parking was hell; you really had to be able to squeeze into the smallest of spaces on a 30% angled slope, not one of my specialities! So that was the beginning of my interest in our nearest hill village, and our nearest Châteauneuf. 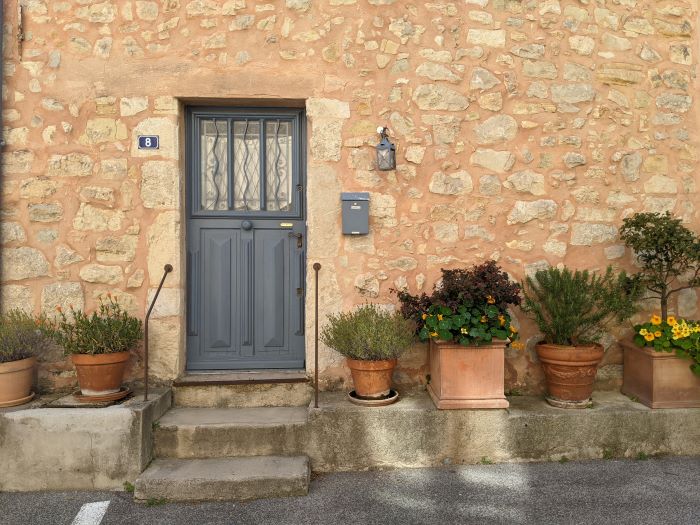 The name Châteauneuf means “new castle” and is a popular name for a town. There are 32 in total in France, spread all over the country from Brittany in the west to Provence in the south. Dating back a thousand years, all these “new” castles are built in strategic sites noted for their defensive features: by the sea, high in the mountains, next to rivers, on promontories etc. 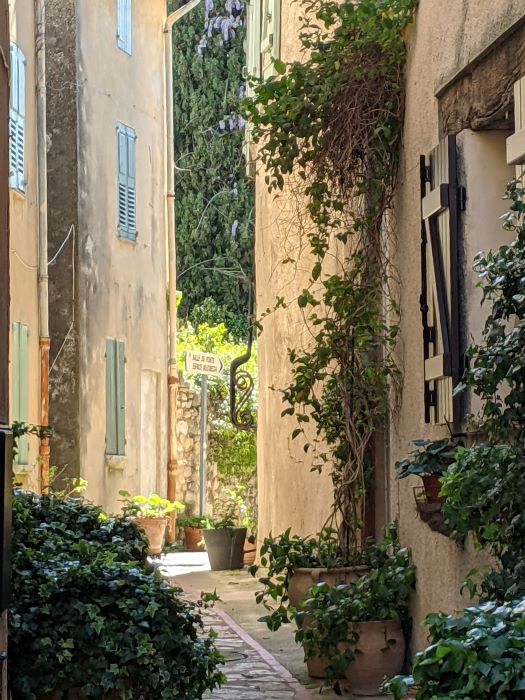 They were nearly always the seat of a noble family bringing great wealth and leaving an interesting historical legacy. This particular Châteauneuf was founded in the 12th century by the Lords of Opio and has been fought over, burnt down and rebuilt over the centuries. 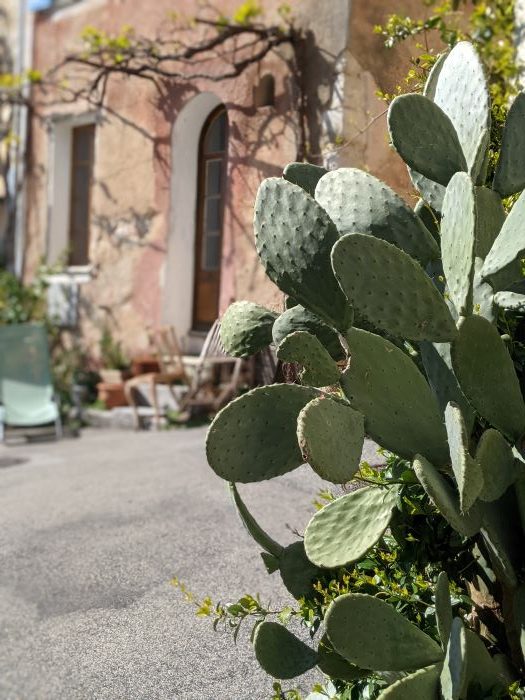 Nowadays the castle (really a large house but called a castle owing to the fact that it was built on the site of an iron age fort) belongs to the Marquis du Rouret. 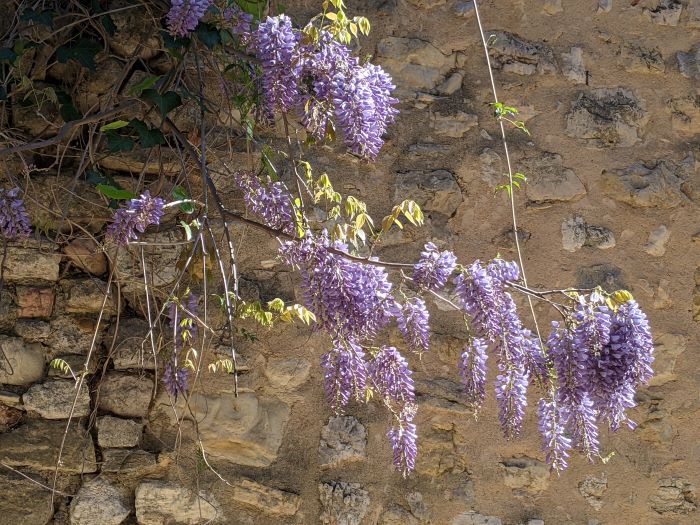 The former King of Belgium, Albert II, also owns property in Châteauneuf. He bought a village house as a holiday home before becoming King but once he was crowned he had to buy the houses on either side for security and staff, so you could say he has three houses in the village. Pretty modest stuff for a royal family. 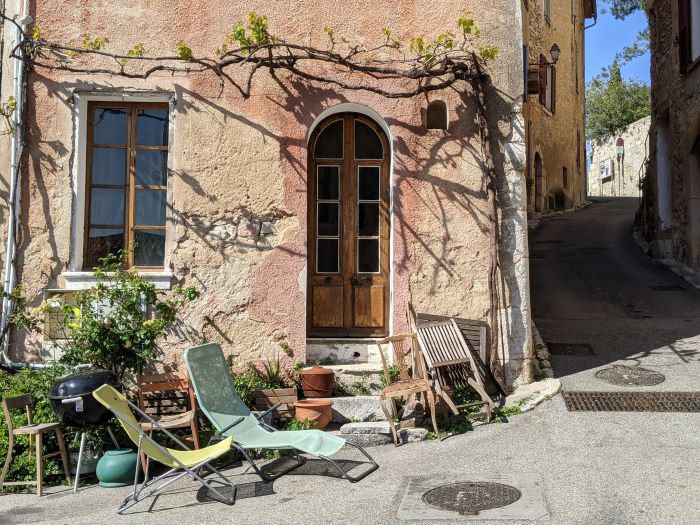 Strolling around my secret hill village you can’t fail to notice poems displayed on walls and at lookout points. This is because Châteauneuf is a “village en poésie”, a designation bestowed upon villages (and towns) that give poetry a prevalent place in local life and municipal cultural policy. 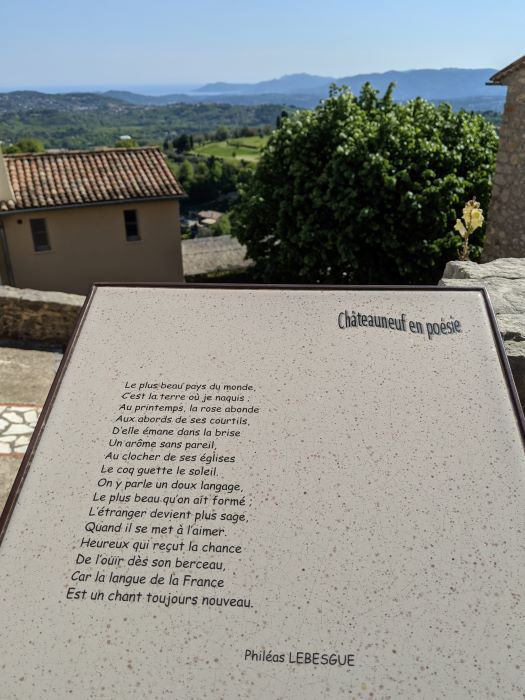 For me, this just adds to its charm and mood of a bygone era. Whether you like poetry or not, it’s hard not to be charmed by poetry displayed so beautifully. You can follow the poetry trail around the village with this map (click to download). 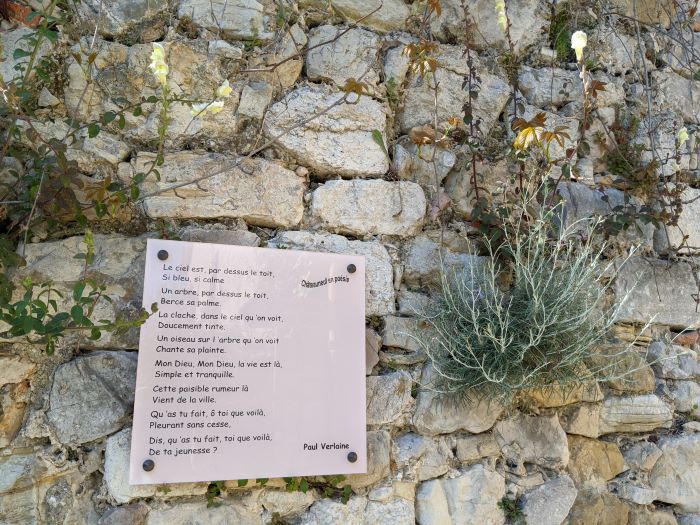 In keeping with the bygone feel of the place, one time I went for a wander around Châteauneuf I came across two people dressed in ranger uniforms, one with a leather sleeve over his arm. They were whistling and searching the sky above them so out of curiosity I asked what they were doing. 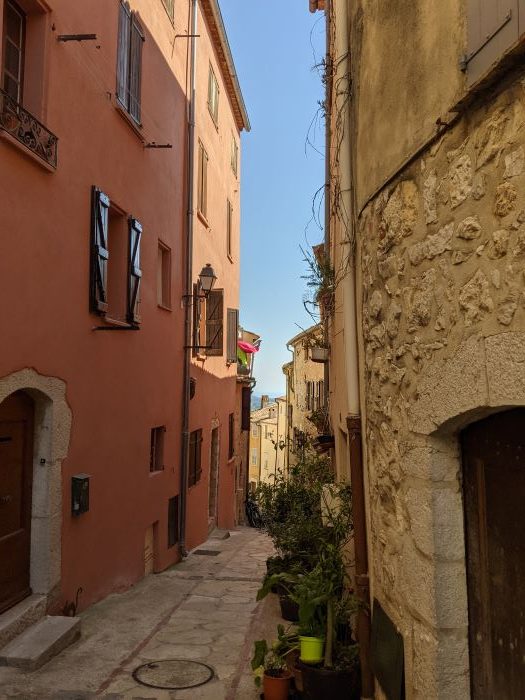 It turned out they were calling their falcon which they were using to get rid of pigeons.  They were employees of the Châteauneuf town hall, “fonctionnaires“, fully paid up to stand around while one bird of prey circled the roofs scaring off the odd pigeon. It struck me as a wonderfully old-fashioned method of pest control but monumentally inefficient!  At least it was ecological I guess. 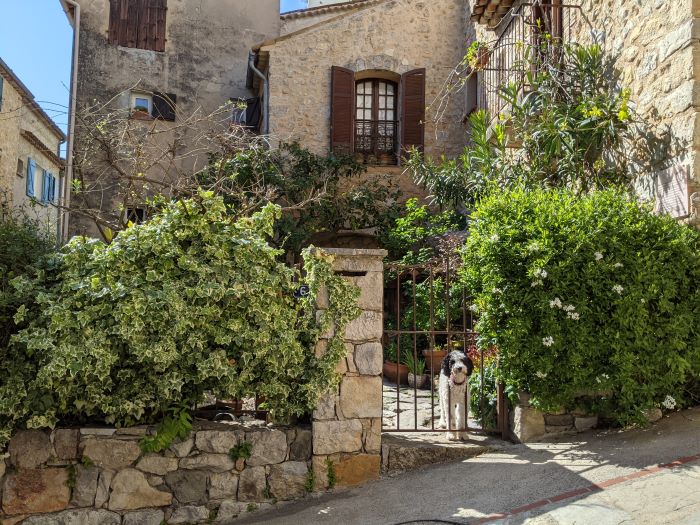 As I mentioned earlier, there are countless hill villages in the Alpes-Maritimes. Some are overrun with visitors, particularly in the summer months, creating parking problems, packed restaurants, crowds at viewpoints and so on. One thing you’ll never find in Châteauneuf is crowds, except for one busy weekend in October when the village holds its pumpkin fair! It really is my secret place and I challenge you not to be charmed. 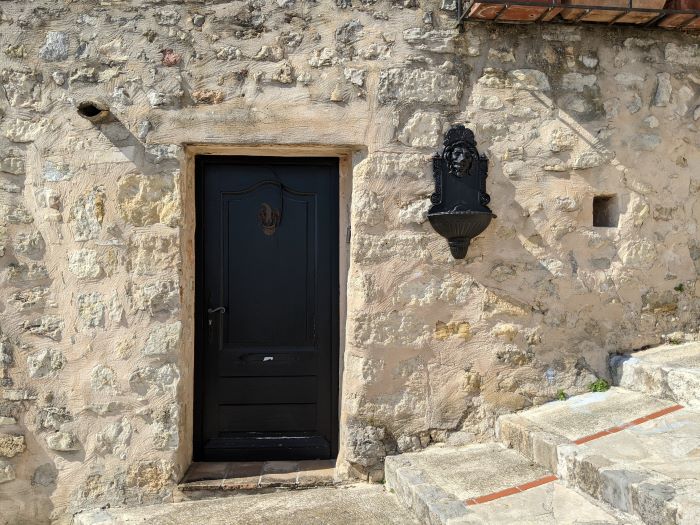 I’ll leave you with a few more photos of this endearing secret hill village. 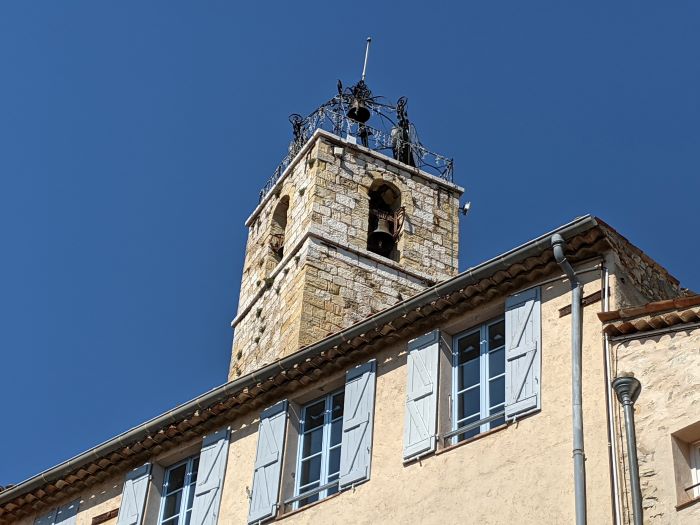 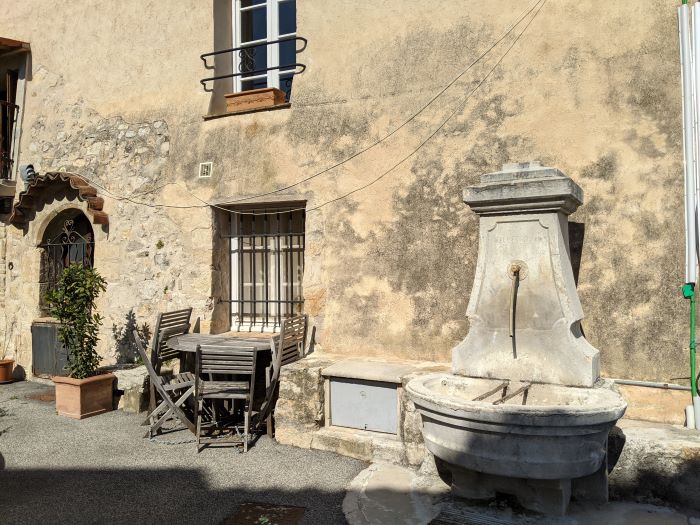 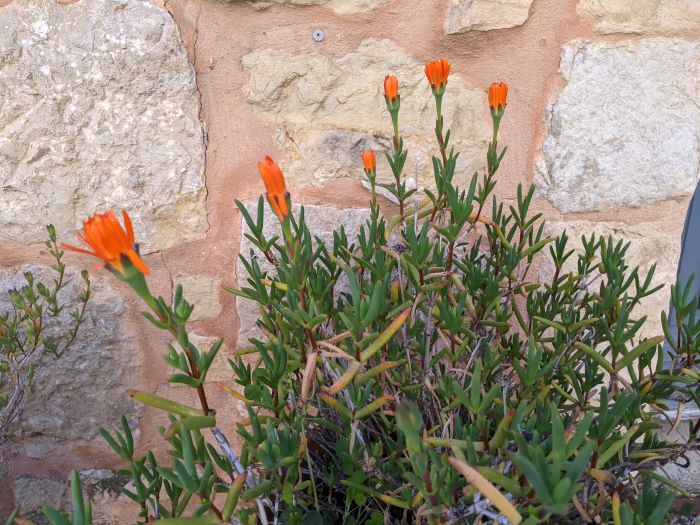 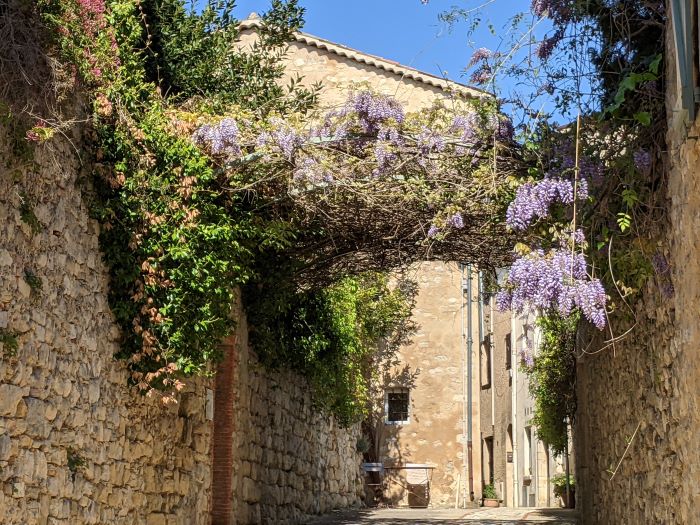 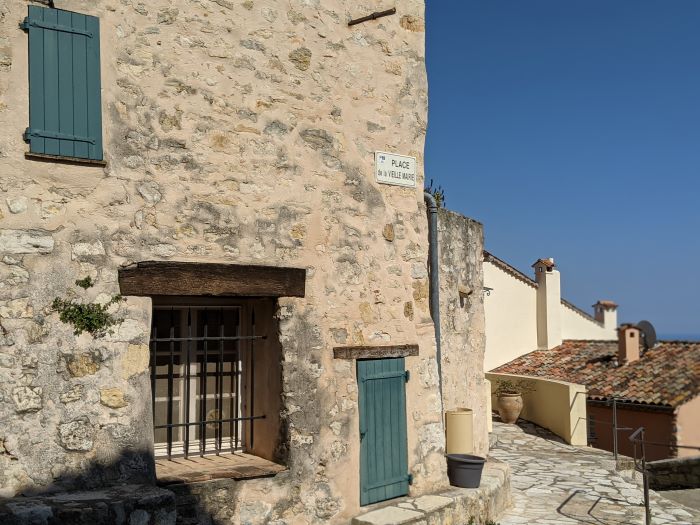 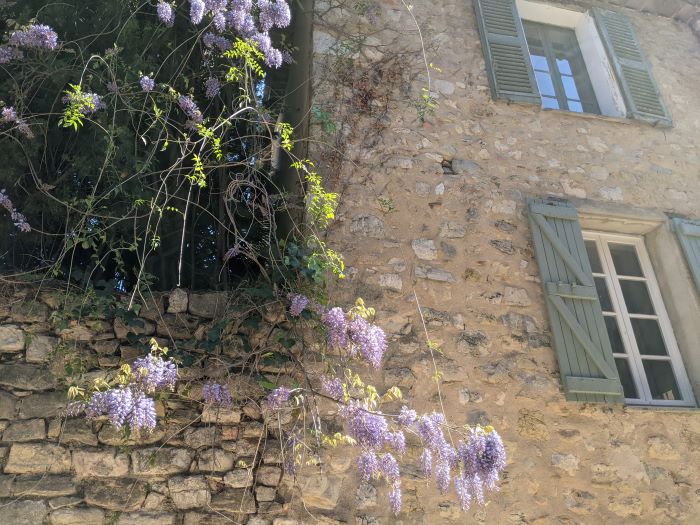 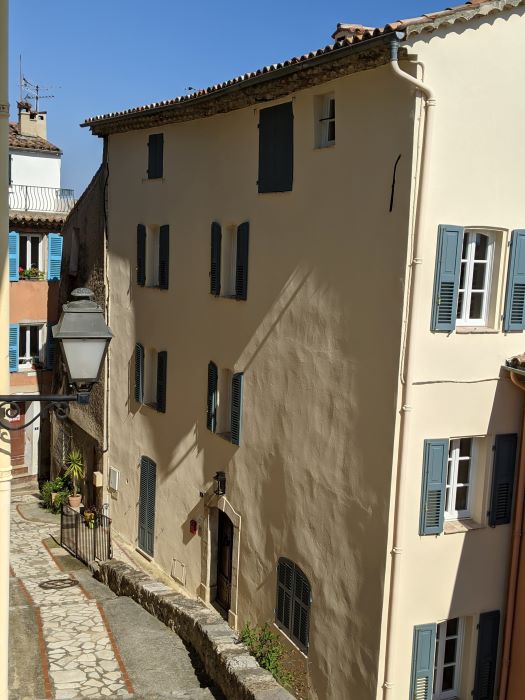 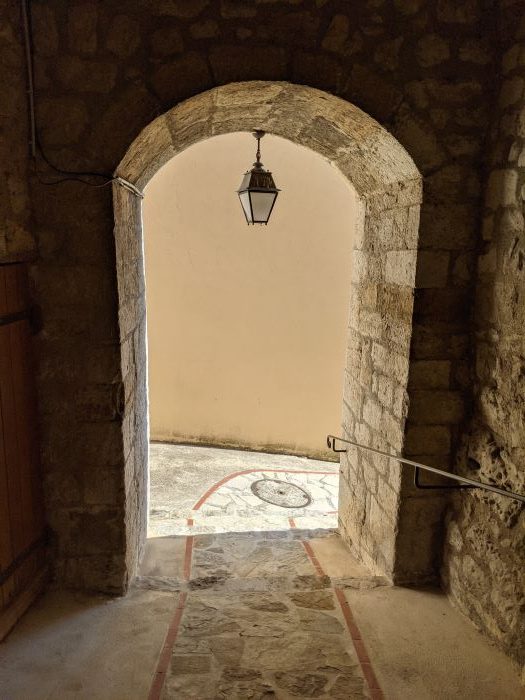 Have you been to any perched villages?  Do you have a favourite?  I’d love to hear from you. 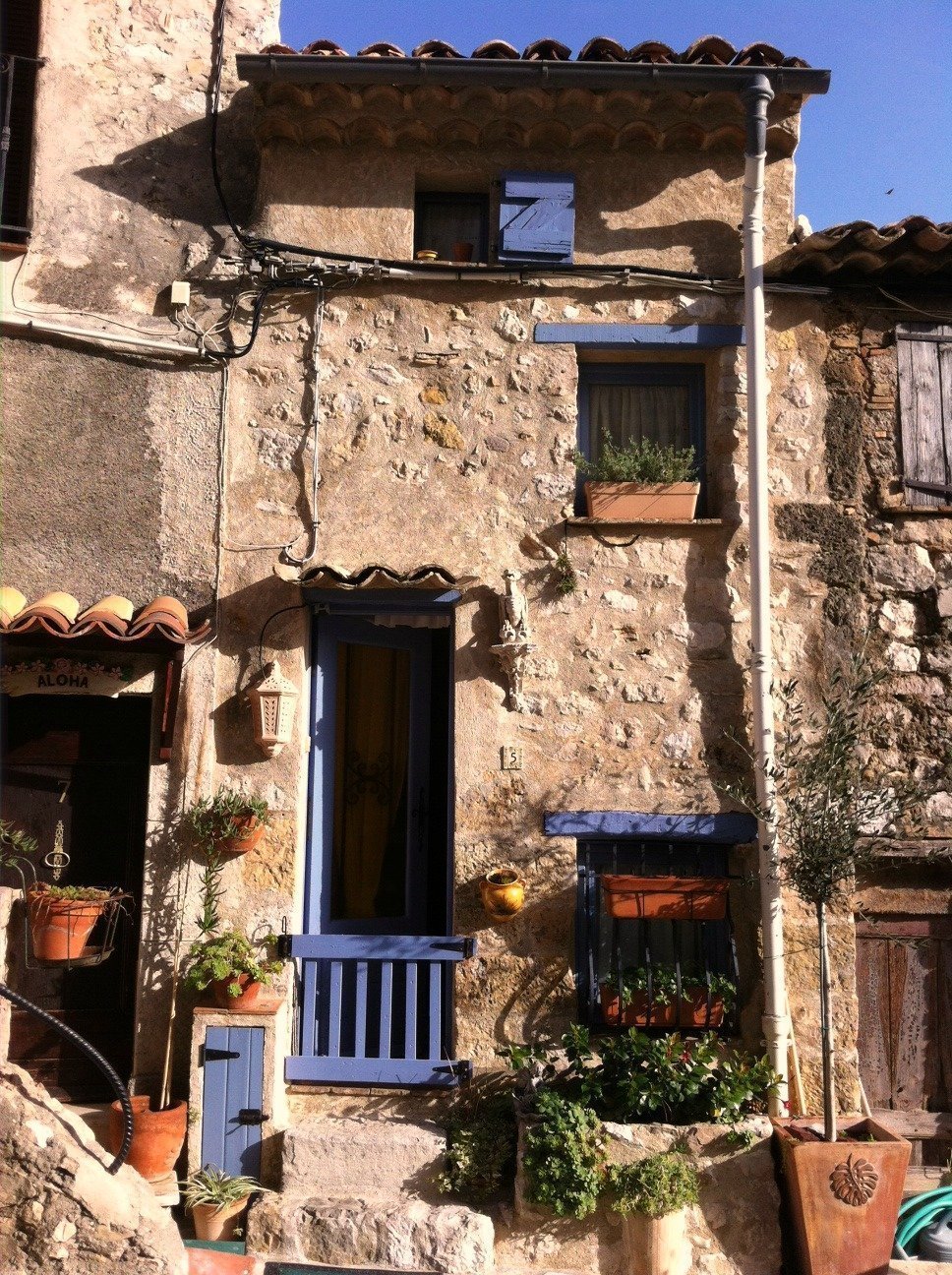 The next prompt for #MayontheMove2021 is roots. Th

This is me. A rare appearance in front of the came

Can you spot my husband? This picture makes me lau